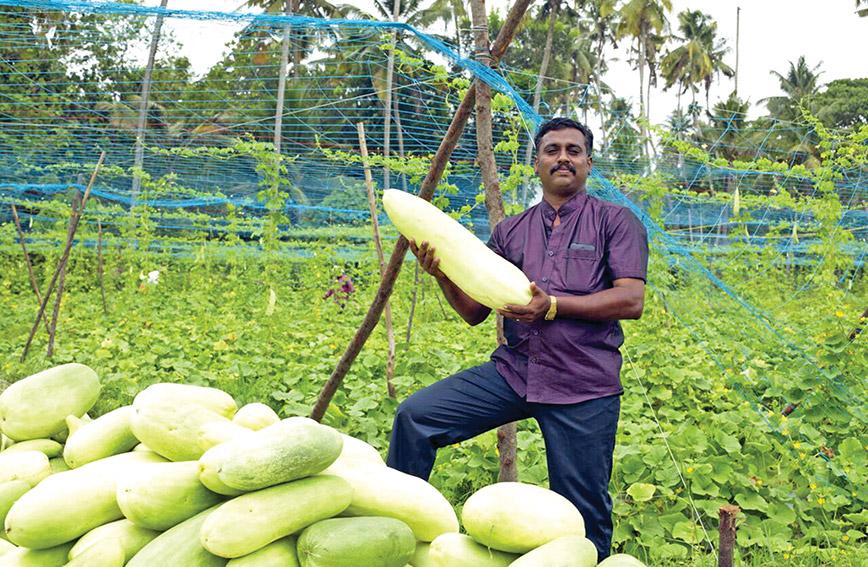 Ranjit with his harvest of snap melon, grown with precision farming

Craze for cracked fruit is bringing in big bucks

In summer, hundreds of makeshift stalls appear alongside National Highway-47 from Chavakkad to Kochi, selling the juice of snap melon to thirsty travellers. The fruit has become so popular that enthusiastic young farmers have started growing  snap melon every two weeks to ensure an uninterrupted supply.

The commercial success of snap melon juice might seem strange at first. The fruit has hardly any shelf life. In just six hours, its skin begins to crack. So it is called ‘pottu’ which in Malayalam means cracking.

But, in actuality, there is nothing nutty about its rising popularity. “Pottu Vellari is 90 percent water. It has many minerals. Drinking its juice is like drinking Electral,” says Dr Narayana Kutty, professor of horticulture at Kerala Agricultural University (KAU) in Mannuthy.

The juice is refreshing and easy to make. Just mash the fruit and mix in a little jaggery powder. New versions of the drink have also been invented and the juice is now blended with coconut milk or cow’s milk.

The cucurbitaceous fruit, botanically called Cucumis melo variety momordica, is mainly cultivated in the southern districts of Kerala, in Ernakulam, Thrissur and, to a lesser extent, in Alleppey. Thrissur is its home turf. The fruit first started being grown here. Today, roughly 500 acres are devoted to raising snap melon.

Unni Parakkote, 61, a farmer of Edavilang panchayat in Kodungallur taluk, has been cultivating snap melon for 30 years. “This is the only crop that can be harvested in 45 days. It’s remunerative too,” he says proudly.

Many farmers keen to grow the fruit arrive here, seeking seeds. Unni keeps some seeds to sell to them. The price of snap melon seeds has risen to Rs 6,000 per kg.

Farmers plant snap melon after the second paddy crop. Being a coastal region, the soil here is a little sandy. Depending on rainfall, the sowing schedule varies from the first to the last week of January. Farmers grow crops organically using cow dung slurry, ground nut cakes and so on.

“We earn about Rs 60,000 from one acre of snap melon. If we cultivate the fruit ourselves we can earn up to Rs 1 lakh,” says Unni.

One advantage of cultivating snap melon is that after the plant grows a little, it doesn’t require irrigation. Soil moisture is enough. “Though the field looks very dry, its sub-soil is invariably moist,” explains Unni.

Once the fruit matures it begins to crack rapidly. In fact, it cracks so much that it is difficult to transport. Interestingly, the fruit is most aromatic when it cracks. “There is a difference in taste a few hours before cracking and after the skin has cracked. Knowledgeable consumers prefer cracked fruits,” says Ranjit, a snap melon farmer.

At the start of the season the fruit is sold for Rs 50. The farmer gets Rs 30. Once the season sets in, the price drops to Rs 30.

Untimely rain just as the fruit begins to ripen can destroy the entire crop. Land is becoming scarce. Paddy fields are being converted to homes. There is also labour shortage. All these factors were causing a decline of this crop in its traditional belt.

But in recent years snap melon is witnessing a revival thanks to the efforts of a farmer and a scientist. Four years ago, Ranjit, a progressive vegetable farmer from Ashtamichara in Mala, approached KAU. He wanted to know whether snap melon could be grown in the laterite soils of the inland areas, slightly away from the coastal belt.

Until then it was strongly believed that the fruit would grow only in the sandy paddy fields of coastal Thrissur. A few attempts to raise snap melon outside its traditional region failed.

At KAU, Dr Kutty took interest. After visiting the laterite belt, he told Ranjit to go ahead but to use new agronomic practices like open precision farming with plastic mulching, drip irrigation and fertigation. Ranjit complied with these instructions and planted snap melon on one acre at Ashtamichara. The crop turned out to be a thumping success.

Ranjit’s success drew his neighbours, two vegetable farmers, to trying to grow the fruit. They too experimented with precision farming and got a bumper crop. These farmers now make as much as `1 lakh from one acre. They sell the crop to middlemen by permitting them to harvest the melons. A lot of investment is required but the profits made are attracting youngsters to snap melon cultivation in non-traditional areas. 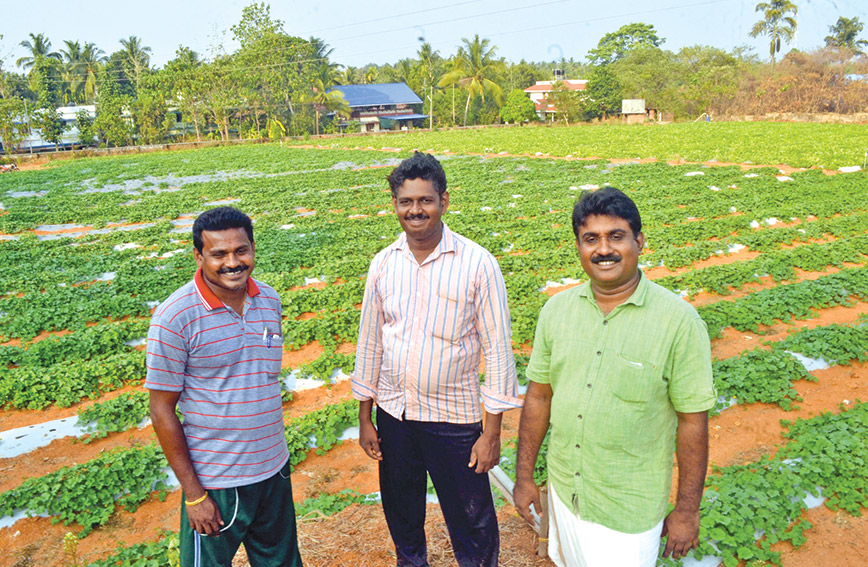 Thanks to open precision farming, farmers like Sinoj, also from Ashtamichara, are raising two crops a year. “Between Joseph Pallan, myself and Ranjit, we grow 500 tonnes of this fruit. We get 10 tonnes per acre. We sow seeds every 10 days to keep up an uninterrupted supply to the market. We are the only farmers who are growing snap melon for six months a year.”

Notably, snap melon is being cultivated on leased land. So these farmers are unsure about getting the same land on lease again. They use the same mulching sheet, drip pipe, PVC pipes and so on to reduce investment.

“Irrigation is very crucial,” warns Ranjit. “If it’s excessive, the fruit starts rotting. If it’s not enough, it withers.” Ranjit and his friends had tried cultivating snap melon the traditional way some years earlier. They splashed water from channels to irrigate the crop. “On some days it would be past midnight when we completed irrigation. It was so tiring and cumbersome. Now all that seems like a bad dream,” says Ranjit. Water is now provided through drip irrigation. Agronomic duties after initial preparations have been reduced to sowing, harvesting and irrigation by running a motor pump. The crop is now cultivated on 100 acres and it has spread to Nedumbassery in Ernakulam district.

The spread of snap melon cultivation to non-traditional areas has resulted in competition. Farmers in the traditional areas claim that their crop is tastier and has better shelf life since they use organic methods. Those in the non-traditional belt retort that their melons, grown with precision farming, are more in demand. “Just by looking at our snap melons you can see their quality. Since we provide all nutrients, including micronutrients, our melons have more aroma,” they say.

Generally, snap melons vary in shape and size. The ones grown with precision farming are certainly better looking. Ranjit says about 55 to 70 percent of their fruit is uniform.

The leading wholesaler for snap melon in Kodungallur town is Gafoor. He says snap melon cultivation has been going on for quite some time. This is his traditional family business. “Of late, many more people, especially the employed middle class, are becoming aware of the nutraceutical values of this fruit. The marketing network has also widened. Snap melon now goes to five districts. But for its very short shelf life, it would have spread still farther.” He endorses the statement that he gets more melons from Mala than from the traditional belt.

It’s common for hormone levels to fluctuate for women who have had a hysterectomy. One symptom they face is sweating even in winter. Says Joseph Pallan, “My wife, who has this problem, gets great relief by drinking two glasses of snap melon juice every day.” According to Jissy George, a home science specialist at Krishi Vijnana Kendra (KVK) in Aleppey, the fruit heals intestinal ulcers and helps those suffering from arthritis.

Yahya, a small trader in Kodungallur, recalls the early years when kakkari stalls (kakkari is another local name for snap melon juice) started appearing alongside highways. He too runs one. These makeshift stalls that begin operating from February offer fruit and freshly pressed juice or milk shakes. “Half a decade ago, there were only a few stalls here. Now, in an 80-km stretch of the NH-47 from Chavakkad to Kochi, you have around 150, almost a couple of stalls per km,” he says.

However, of late, some farmers have suffered by growing snap melon. According to Ranjit, these new farmers had grown it this year with the precision farming method. But, they failed to get a buyer for the crop. This might have happened because of market saturation. 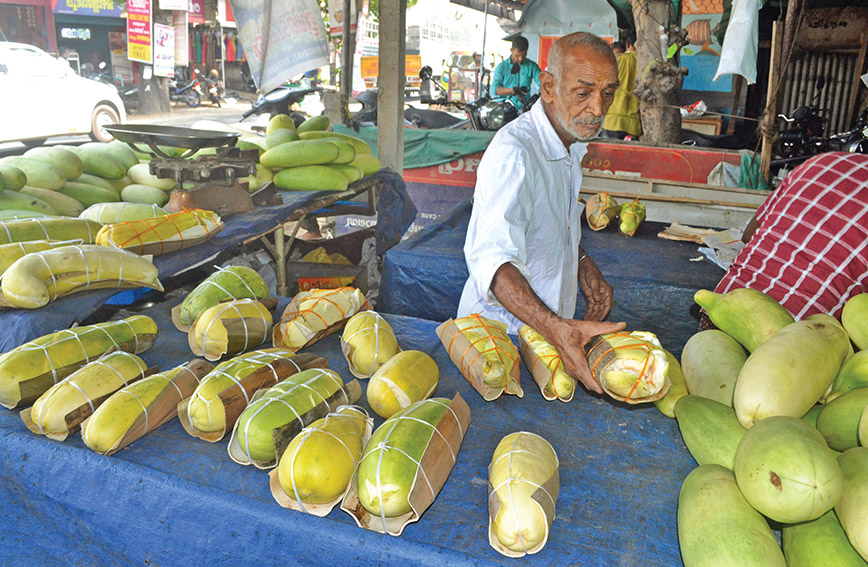 Snap melon is also grown in other states. In Karnataka, it is called ibbadla and kakkarike. In Goa and Maharashtra, it is called chibud. In Maharashtra, the fruit is grown during the monsoon to be sold during the Ganesh festival. In Rajasthan it is used as a vegetable. Farmers dehydrate it and sell it. But only in Kerala is it aggressively marketed as juice.

Hotels in Thrissur and Kochi are yet to introduce snap melon juice on their menus. Those in Mangalore in Karnataka serve chibud juice — which is actually musk melon and not snap melon — round the year.

Unfortunately, agricultural scientists haven’t taken snap melon’s rising popularity very seriously. Training farmers or local entrepreneurs to make ready-to-serve (RTS) juices from snap melon would have been a real contribution. Those who enjoy the juice at roadside stalls could then take a few bottles for their family members.

KAU sources say that years ago they did develop a method of producing RTS products from snap melon. However, no details are available.