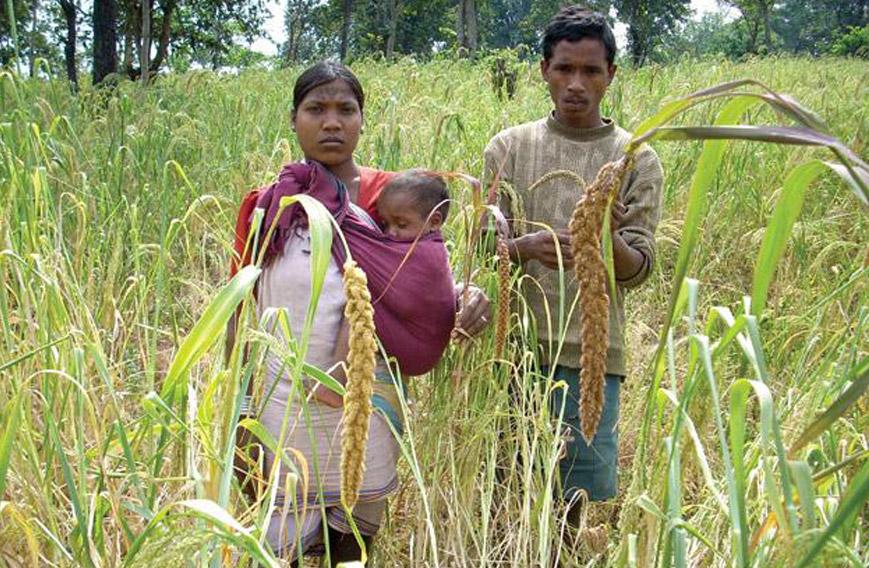 A field in Dharaav village

In Dharaav village in Hoshangabad district of Madhya Pradesh (MP), tribal farmers practise a system of mixed cultivation that they call utera. Several cereals, millets and legumes are grown together in June. Ganpat, a 60-year-old farmer, says that they don’t need to spend any money at all to practise utera farming.

These farmers save seeds from the previous year’s crops. Farm animals fertilise the fields with manure while crop residues completely free of chemical poisons, provide nutritious food for bullocks, cows and other farm animals. Mixed farming of grains and legumes ensures that soil fertility is maintained. If one crop fails due to some reason, other crops enable farmers to survive despite some loss.

Yet the predominant attitude of agriculture officials towards tribal communities is to try to convince them to give up their ‘backward’ agricultural practices  and adopt more ‘modern’ and ‘high productivity’ ones. Often, no attempt is made to try to understand the traditional agricultural systems and practices of tribal communities. It is taken for granted that tribal agriculture is backward and needs to be replaced by readymade ‘modern’ solutions available with officials.

This is not the reality. What we see in tribal villages is an agriculture system in harmony with nature and the nutritional needs of the people. Tribal agriculture is a risk-minimising system which can provide at least some food even in adverse weather conditions. The relevance of this eco-friendly, zero-fossil fuel farming system has increased further in times of climate change and erratic weather.

In Dindori district of MP, Baiga tribals practise benvar agriculture. Gothiya, a farmer of Kandabani village, explains that during early summer small bushes, branches and fallen leaves are set on fire. Mixed seeds are scattered into this thin layer of ash. After about three years the site of farming changes. After letting the land remain fallow, tribal farmers return to it after nine years.

About 16 crops are routinely grown in this mixed farming system. These, further, have about 56 varieties. Various crops support each other. The bigger plant growth of maize protects the kulthi crop from strong winds. Nitrogen, absorbed by cereals, is replenished by legume crops.

This benvar system does not require the land to be ploughed. This system is rooted in the belief that ploughing hurts Mother Earth. Forget tractors, even ploughing by bullocks is avoided. This, in turn, helps women farmers to be very self-reliant.  Ploughing in most farming systems is handled by men.

Naresh Vishwas, who has written a book on the benvar system, says, “This system helps baiga tribal farmers cope with many adverse situations. There were some disruptions but then traditional seeds could be collected and this system could resume in many villages.”

Vishwambharnath Tripathi, another researcher, has catalogued 26 types of cereals, 28 roots and tubers, 40 vegetables, 45 fruits and 21 mushrooms used in various tribal villages practising biodiversity-rich agriculture. Tribals also collect many foods from forests on the basis of their knowledge about the plant and tree diversity of forests.

A study titled “Forests as Food Producing Habitats” conducted in Rayagada and Sundargarh districts of Odisha by Debal Deb and others recently recorded 121 different kinds of uncultivated foods being harvested by villagers, mainly tribals. Ninety-eight different kinds of uncultivated foods were used to prepare cooked foods. The study found that forest foods could be playing a vital role in terms of micro-nutrients. Particularly in times of stress, uncultivated foods form a critical source of nutrition. If the forest is well maintained there is year-long supply of such food. This food is completely free and hence accessible to the poorest.

Many problems among tribals arise not from any lack of traditional wisdom but due to exploitation and disturbances (including displacement) they have to face due to outside forces. For example, their entire system collapses when they are pushed out of sanctuaries and park areas, or to make way for dams and industries.

Debjeet Sarangi, a social activist who works with tribal farmers in Odisha, says: “We found that several tribal farmers were routinely growing 55 to 60 crops on two- acre farms, and the mixed farming system was rooted in sound agronomic and nutrition logic. These tribals had excellent knowledge about very diverse uncultivated food they could obtain from forests. We contacted senior researchers who told us that as long as these traditional systems were well-preserved, tribal communities did not need outside help or employment works during bad drought years. Unfortunately, the spread of monoculture crops and plantations under the garb of ‘development’ as well as other destructive projects implemented thoughtlessly without understanding the value of tribal farming harmed the self-reliance of tribal communities. While tribals looked upon their land as their mother, outsiders saw only the minerals they could extract as quickly as possible.”

Sarangi adds, “Experiences of our organisation, Living Farms, show that any food security system proposed by the government should take into consideration the ability of traditional farming tribal systems to provide a very diverse and balanced mix of nutrients in the form of several millets, legumes, cereals, fruits, vegetables and herbs. The food security proposed by the state should support this strength and self-reliance of traditional food systems instead of harming them.”