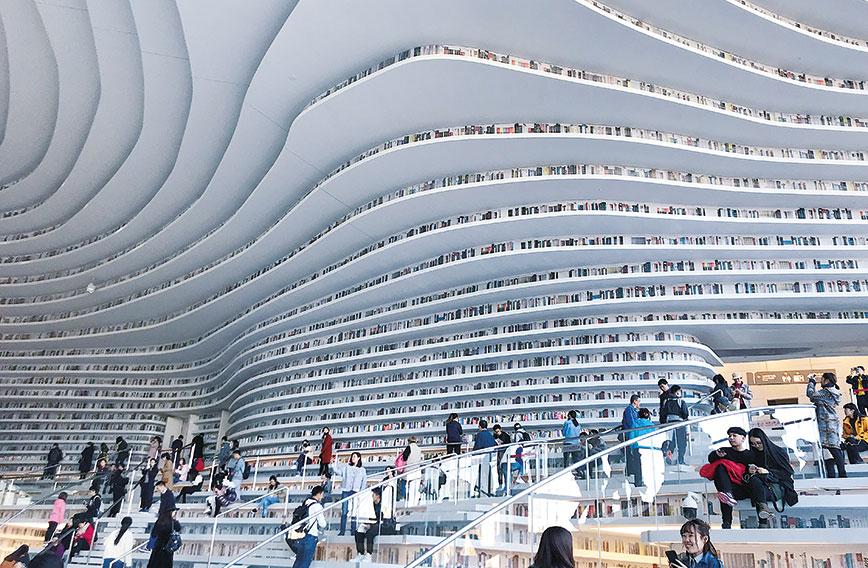 A futuristic library in Tianjin, China

Who needs a library?

Driving down one of Beijing’s broad boulevards one evening, I chanced upon a tall building with dozens of students seated on the steps outside. Was it a dharna? Were they protesting about something? My taxi driver laughed. They are waiting to enter the library, he told me. It was around 5 pm and so I asked him if the library opened only in the evening. He laughed again. The library is open till late night from early morning, the students outside the building are waiting for chairs to be vacated by those inside so that they can go in, he said. The library was fully occupied! It could permit new readers to come in only when those inside left. The hunger for learning is palpable in China and libraries are around in plenty and fully used.

It reminded me of my student days at the Jawaharlal Nehru University when, in the weeks before examinations, the library would be filled and one had to await one’s turn to get a place inside so as to access a book that was kept in reserve and not issued. But this spectacle of a crowded public library in the middle of a city is not a familiar one in India.

It was a recognition of the need to spread the public library movement across the country that prompted the Manmohan Singh government to launch the National Mission on Libraries (NML) in 2012. The idea was originally proposed to the prime minister by his joint secretary, the late R. Gopalakrishnan, a Madhya Pradesh-cadre IAS officer. While the original proposal was made in 2008 and an order issued in 2009, the NML was constituted only in 2012 and launched in February 2014 by President Pranab Mukherjee.

Visiting NML’s website (nmlindia.nic.in), one is immediately disappointed to see that it was perhaps last updated in 2016. The website does not come across as a live centre of latest information on the achievements and activities of the mission. The only useful data available is the state-wise list of Registered Libraries. A total of 5,352 libraries have registered themselves on this website, providing information on their names, location and number of books and publications available. Maharashtra tops the list with 919 public libraries registered with the NML. Madhya Pradesh is at the bottom with five. West Bengal comes second with 833 libraries followed by Gujarat with 527 and Kerala with 523. From Uttar Pradesh only 46 have registered.

Apart from government-funded public libraries, there are many privately funded and publicly funded libraries in several states, especially Andhra Pradesh, Telangana, Gujarat and Maharashtra. The Sundarayya Vijnana Kendra in Hyderabad, dedicated to the memory of CPI(M) leader P. Sundarayya, is an excellent example of such a public library. Situated in the heart of the city, it is widely used and has a good collection of books. Chennai and Mumbai also have such public libraries. Delhi was a pioneer in this effort when the Delhi Public Library was set up in 1951, but the nation’s capital has few such libraries today. Most good libraries are attached to teaching and research institutions and are not easily accessed by the lay public.

All this sounds good, but is clearly not good enough. Rarely does one come across the Beijing street scene wherein young people are waiting patiently to enter a library. China has built both grand public libraries, like the libraries in London and Washington, DC, and small neighbourhood libraries across the country. India not only needs more libraries but also a library-using culture.

I recall the passion with which the late Gopalakrishnan pushed the proposal for a national library mission, hoping the mission would not just find financial resources for improving and creating libraries but would also promote a mass culture of accessing libraries. A public library is a symbol of a knowledge-based society. The habit of using libraries must be inculcated in children from primary school onward. The discipline of handling books, of sitting quietly along with many others in a large room and reading a book are important pedagogic tools. They help shape a nation’s character.

The foundational pillar of a good library is a good librarian. I recall how in the early 1970s the JNU chief librarian, Girija Kumar, would walk around the reading rooms of the library, seeing what students were reading and engaging them in conversations about these books. He would suggest other options and tell you where you could access them. Sometimes he would go down to the stacks and bring up a book that one might want to read. At the Nehru Memorial Museum and Library, its then director, Professor Ravinder Kumar, a historian, also engaged library users. Noticing that I was working on the imperial sugar policy in the 1930s, as part of my doctoral work, he sent me an invitation for a conference at the Indian Institute of Advanced Studies in Shimla. For a young researcher this was a truly thrilling reward.

I am sure there are many Girija Kumars and Ravinder Kumars around the country who walk the aisles of the libraries they manage, helping users and encouraging them to explore new avenues of knowledge. As a nation we need to reward such librarians. We need to build more libraries, stock them with good books in the language of a library’s users and make libraries more accessible and enjoyable.