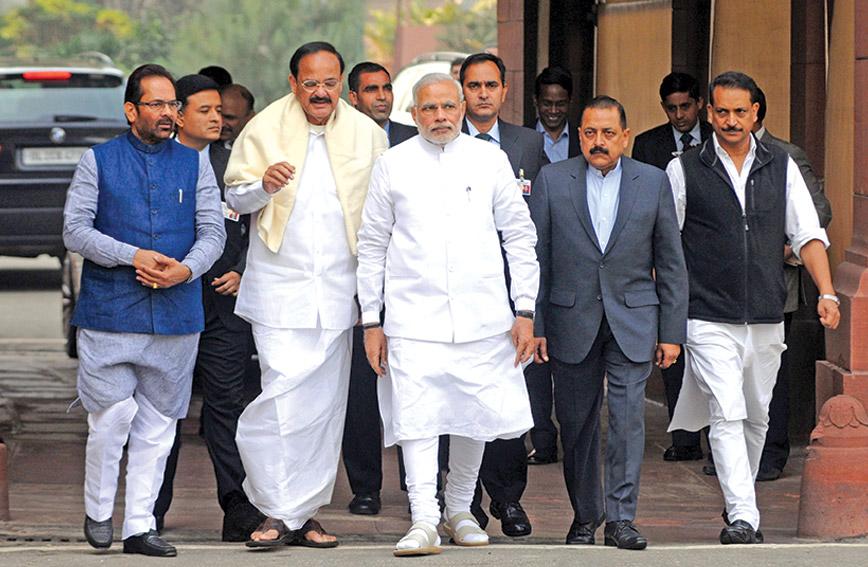 Prime Minister Narendra Modi with members of his Cabinet

Three summers ago a routine Lok Sabha election, 16th in a row in independent India, threw up a slightly unexpected result with the Bharatiya Janata Party (BJP) riding yet another wave of what Indian political analysts have come to dub as “anti-incumbency”. I say ‘slightly’ because most expected the BJP would once again form a coalition government, but few expected the party would secure an absolute majority of its own. Thanks to a vigorous and imaginative campaign launched by the irrepressible Chief Minister of Gujarat, Narendra Modi, the BJP secured 282 seats in the 541-member Lok Sabha.

A change of government, that too after the United Progressive Alliance (UPA) government had a decade-long run in office, would normally have been par for the democratic course. Winning and losing is part of the electoral game. However, Prime Minister Modi did not view his victory quite that way. He was not taking the view that this time the BJP had won, and next time around someone else may win.

Savouring his victory, Mr Modi declared that his ultimate objective would be to ensure a “Congress-mukt Bharat”. This bold assertion was based on the assessment that the Sonia Congress had run its course and there was not enough steam left in the Nehru-Gandhi family engine to revive the party’s momentum. The Sonia Congress’s dismal performance finally revealed to all how deep was the rot that had set into the Congress. Mr Modi saw the Congress as a party on the verge of disintegration. He did not view his victory merely as a turn of the electoral cycle. He saw it as signalling regime change.

Looking back at the last three years, it is clear that there has been a fundamental shift in the political preferences of a large number of Indians. Sure, the BJP’s vote share in the Lok Sabha election has not yet crossed a third of the votes polled. Sure, the Congress still has a one-fifth share of votes polled. But the numerical gap is not the point. It’s the trend that one should focus on. The share of Congress votes is declining, That of the BJP is rising. More than numbers, it is the ideological dominance of the BJP that has come to define the regime change in the Delhi Darbar. If Atal Bihari Vajpayee’s strategy was to co-opt the ruling elite of Delhi, Mr Modi’s has been to marginalise them.

What exactly does this so-called ‘regime change’ imply in terms of policy? Interestingly, there has not been much change in two key areas of policy — economic and foreign policy. Whatever the spokespersons of the BJP may say, Mr Modi’s economic and foreign policy more or less follows a path set by his predecessors over the past two decades. If there is a change it is more to do with the manner in which policy is articulated rather than in the policy itself.

Consider first the government’s key ‘flagship programmes’ — Make in India, Swachh Bharat, Skill India and so on. Most of these initiatives were first thought of by the UPA government. Mr Modi has repackaged them and has been more energetic in implementing them. Second, there has been no change in the broad direction of macro-economic and external economic policy. True, there has been a change of emphasis or priority but much of that has been about responding to a changing global and national economic environment. With the singular exception of the demonetisation move there is no other economic policy initiative that a non-BJP government would not have adopted as a matter of principle.

There has also been a remarkable continuity in Indian foreign policy. The difference has been in its articulation, especially with respect to India’s neighbours. Sure, there are some interesting departures from the recent past — a tougher line on China, for example — but if one were to ignore the rhetoric on Pakistan, there are few other areas where a third Manmohan Singh government would have reacted any differently from the Modi government. I am not even referring to a ‘Rahul Gandhi government’ because there would never have been one, and never will be!

The real point of departure has, understandably, been on the cultural and ideological front. Since the BJP views the Modi victory as heralding ‘regime change’ it has pushed hard to bring about changes on the more visible cultural and educational fronts. Some of it is understandable and one must compare Mr Modi’s moves with those of governments elsewhere in the world that came to power as a consequence of ‘regime change’ rather than normal electoral cycles. Iran in 1979,
for example.

While the shortage of talent on the BJP’s side that is available to replace existing stakeholders in the spheres of culture and education is understandable, some of the appointments made have been done without thinking through the consequences. It is one thing to replace a Left-wing ideologue with a Right-wing ideologue, or a ‘pseudo-secular’ with a Hindutva believer. It is quite another to replace a competent person with an incompetent one — as has happened in several institutions of higher education and research. But, that is what a regime change can often be all about. The chaff gets in with the wheat!

This mix of continuity on the economic policy front, with a focus on development, and discontinuity in the social, educational and cultural space is what I have dubbed as “developmental Hindutva” (The Indian Express, 14 April 2017). Mr Modi’s regime change is best described in these terms.  How then does one sum up the experience of the first three years of the Modi government? In its essence there has not been much of a policy shift on either the economic or foreign policy front. The change has been in the manner of articulation of policy, not even in the manner of its implementation. The instruments remain the same — the civil service machinery. What has changedare the tone and tenor of the political discourse. In part, that is on account of the fact that the regime change of 2014 signalled an ideological shift in Indian politics that the Congress and its fellow-travellers are still trying to come to grips with.