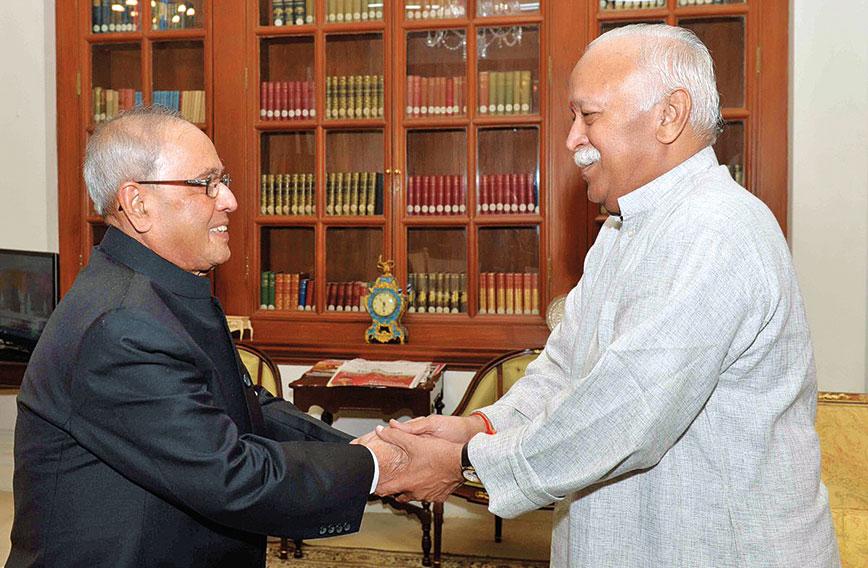 Pranab Mukherjee has got the Congress Party’s knickers in a twist. It is a measure of his political clout and cunning that he has managed to get both the Congress Party and the Rashtriya Swayamsevak Sangh (RSS) to applaud his speech in Nagpur earlier this month. In itself the speech said nothing new and was crafted to secure approval from all sides. After all, Pranab Mukherjee has drafted umpteen party resolutions and statements for the Congress Party and so knows how to construct a set of sentences in a manner that conflicting constituencies can concur.

It is now clear that Mukherjee’s journey to Nagpur has served both him and his hosts well. While the RSS has demonstrated yet again its declining political untouchability, Mukherjee has managed to return to prime time news and the front pages after almost a year of hibernation, triggering speculation about his political relevance and longevity. Neither RSS chief Mohan Bhagwat nor Mukherjee may, in fact, seriously think that the latter could make himself available for Prime Ministership, but both could benefit from continued speculation on that count.

If Mukherjee is not in the race for Prime Ministership why did he agree to go to a high profile event in Nagpur at the invitation of the RSS? Surely he would not have imagined he could help shape minds and change the RSS’s way of thinking. His speech was, therefore, incidental. He said enough to keep everyone happy and even secured the approval of Mani Shankar Aiyar, the matthadhipathi of Congress secularism.

There comes a stage in the life of a lifelong politician when he worries about how he would be remembered. Clearly, Mukherjee, like Dr Manmohan Singh, does not seek the fate that befell their mutual mentor P.V. Narasimha Rao. Both saw how Rao was rubbished by their party and its First Family. To avoid that fate Manmohan Singh chose the path of unquestioned loyalty to the First Family. Mukherjee has not walked that path. When commentators in the media refer to him as a ‘lifelong’ and ‘loyal’ Congressman, they are wrong. They just have to read Mukherjee’s own autobiography to understand the nature of his political journey and his complex relationship with the Congress and its First Family.

Mukherjee’s unswerving political loyalty has only been to Indira Gandhi. He joined the Indira Congress and his political career took off in 1969 when Indira Gandhi split the Indian National Congress. He was badly treated by her son Rajiv Gandhi and had to, in fact, quit the Congress after Indira’s death. While he did return to the fold during Rajiv’s time, it was Narasimha Rao who gave him a second lease of life. His career secured a boost in the coalition government of the United Progressive Alliance (UPA) because of the support he secured from the Bengal Communists, but he was denied the post of Deputy Prime Minister — something that L.K. Advani managed to extract from Atal Bihari Vajpayee but Mukherjee failed to from the Sonia-Manmohan combine.

It was not surprising that the Congress Party chose Anand Sharma as one of its senior leaders to criticise Mukherjee’s decision to go to Nagpur. Sharma was the second senior-most Brahmin minister in the second Manmohan Singh government, next to Mukherjee and once H.R. Bharadwaj was packed off to Bengaluru as Governor. Sharma and Mukherjee never thought much of each other. By going to Nagpur, Mukherjee has widened his circle of support. Who knows, if not the Prime Ministership he may secure at least a Bharat Ratna!

What was in it for the RSS? The view expressed by many critics of the RSS that Mukherjee has helped raise the stature of the RSS by travelling to Nagpur is nonsensical. It is only the New Delhi media that has such an exaggerated view of Mukherjee’s stature in the country. The fact is that in the past few years the membership of RSS has grown geometrically and Mukherjee’s contribution to its stature and appeal would hardly matter.

What has changed is the RSS, as an organisation. The RSS seems to have recognised that its past approach to national politics had reached its limits when Narendra Modi stormed into the Prime Minister’s office on the back of a national wave that he virtually single-handedly created. As one senior RSS functionary told me, “Till Atalji’s time the BJP needed the RSS. In Modiji’s time the RSS needs the BJP.”

The popularity of the RSS has grown over the past four years, thanks to the image of Prime Minister Narendra Modi among the middle-classes. While it is a fact that Modi needs the support of the RSS, the latter has come to appreciate the new thinking about Hindu nationalism, with a focus on economic opportunity and modernisation, that Modi has tried to promote in recent years. Both the RSS and Modi have come to recognise that they need each other for their mutual political growth.

Interestingly, the RSS has produced a very well designed and crafted coffee-table book about its history and philosophy aimed at the modern urban reader. It signals a willingness and a desire to reach out to new, intellectual and socially relevant communities. RSS functionaries in organisations like the Swadeshi Jagran Manch are very well read on latest debates on economics and have started engaging intellectuals in serious conversations.

Perhaps it was to signal this shift that the RSS chose a high profile public figure like Mukherjee to lecture them at Nagpur. Given the kind of attention the event, the speech and the debate around it have received, the RSS leadership should be happy. It has successfully signaled the shift in its approach to nation building and its desire to rebrand itself for a new era in Indian politics.