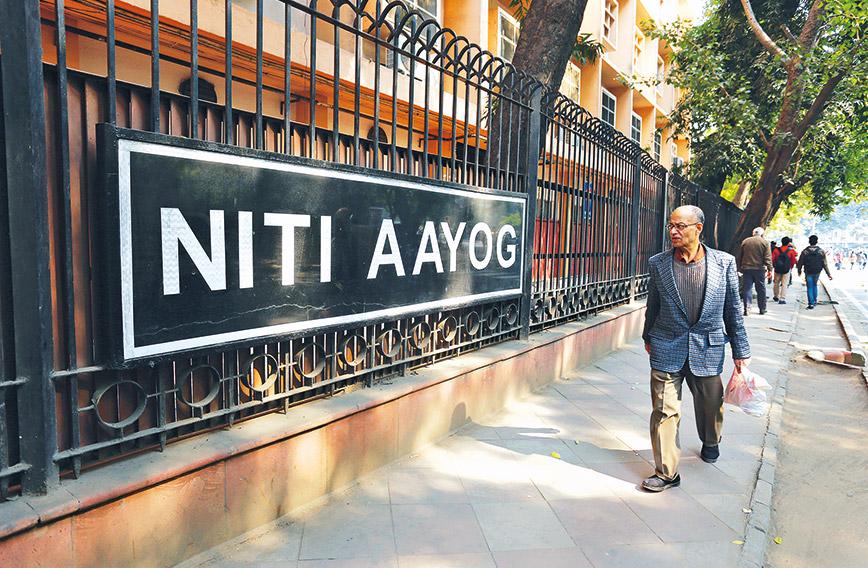 NITI Aayog has no policy-influencing ‘teeth’

WE have had ‘plan holidays’, that is, a break from five-year plans, many times before. In the late 1960s, the late 1970s and the early 1990s. The first and third were occasioned by economic crises that made extant plans impractical. The break from a five-year plan in the late 1970s (1978-80) was not referred to as a ‘plan holiday’ but as the adoption of a ‘rolling plan’. The latest plan holiday, if one can call it that, after the winding up of the Planning Commission in 2014, has lasted long and now appears to have outlived any purpose.

It is now clear that the Indian economy is stuck at a point well below its potential growth rate. Recall that after three decades (1950-80) of 3.5% growth, the economy logged 5.5% for two decades (1980-2000) and 7.5% for another decade and a half (2000-15). Even if the ‘high’ growth years (2003-09), when national income grew at close to 9.0% per annum, were an aberration that over-heated the system, generated non-performing assets and piled up debt, the fact remains that an annual average growth rate of 7.5% had come to establish itself as feasible and sustainable. The view since then has been that an annual average growth rate of 8.0% is India’s potential and sustainable growth rate.

Since 2015 the economy has performed well below this potential. While economists may continue to disagree on what the average growth rate of the economy was in the period 2015-22, it has certainly been below 7.5%. Not surprisingly, therefore, the Central government has now set for itself a 7.5% growth rate as its medium-term target growth rate. In other words, returning to the growth path of the first 15 years of this century.

There is, however, a problem. In the period 2000-15, India logged 7.5% at a time when the global economic and geopolitical environment was very favourable for the country. In the next two, if not five, years the global environment is unlikely to be as favourable. Already India’s exports are down, trade and current account deficits are up and the global economy faces the threat of a recession in the West and a slowdown in the East.

Whatever the government and ruling party spokespersons in New Delhi may say in public about the economy, there seems to be an implicit recognition within policymaking circles that everything is not going well. An important reason for this is the worsening external economic environment, following the Ukraine war, the financial sanctions imposed by the US and EU and America’s monetary policy. While recent editions of the finance ministry’s Monthly Economic Report claim that the domestic economy is chugging along even though global challenges are mounting, it should be obvious to anyone that the two are not decoupled. The global economic slowdown and new challenges to globalization are bound to impact Indian economic growth.

It is true that the Indian economy has performed better than most major economies. India has been able to absorb the impact of COVID-19 and the policy response to it. It is also true that the domestic corporate sector has insulated itself to an extent from the slowdown. However, not only is the small, micro and medium scale industrial sector in the doldrums but  employment generation has lagged far behind potential demand.

Indeed, even when macro-economic growth was reasonably high, above 7.0%, employment generation remained below par. This phenomenon of ‘jobless growth’ has been widely written about. The challenge is even more today as capital-intensity of all three sectors — industrial, agricultural and services — is going up. India needs medium- to long-term thinking on strategies for employment generation in an era of automation. Any such thinking also requires greater coordination between the Centre and the states.

It was not an accident that the Planning Commission also became a federal institution as a meeting ground for Central and state ministries in a range of areas. The Commission and the National Development Council were two institutions that facilitated medium- to long-term thinking on policy and consultations between the Centre and the states.

When Prime Minister Narendra Modi abolished the Commission and created, in its place, NITI (National Institution for Transforming India) Aayog, no one in government paid any attention to what role the new institution would play in devising medium-term strategies and coordinating policy between the Centre and the states. Reduced to a government ‘think tank’ with no policy-influencing ‘teeth’, the Aayog has failed to devise a medium-term strategy for growth. Buffeted between a slowing domestic demand and investment growth, and growing external challenges the Indian economy requires medium- to long-term strategies that can be pursued by both the Centre and the states.  Influenced by the private sector policy of reporting quarterly results, even governments have begun to report quarterly growth rates, however weak the data. While markets  seek such short-term data, the economy’s rhythm is based on medium-term trends.

There is little steam in all the talk about ‘double engine’ governments — with the same political party in power at the Centre and in the state — if there is little coordination between the two engines. Experience teaches us that neither individual Central ministries nor the Prime Minister’s Office can function as ‘federal’ institutions that can facilitate policy coordination and the pursuit of medium-term development strategies.

With the finance ministry placing greater emphasis on public investment as an engine of growth and with the Central government deploying industrial policy to revive manufacturing activity there is today greater need for medium-term planning. Prime Minister Modi may fight shy of altering the name of NITI Aayog and reviving the Planning Commission, but he need not fight shy of altering the Aayog’s agenda and his style of functioning, building greater competence within the Aayog and greater trust between the Centre and the states.