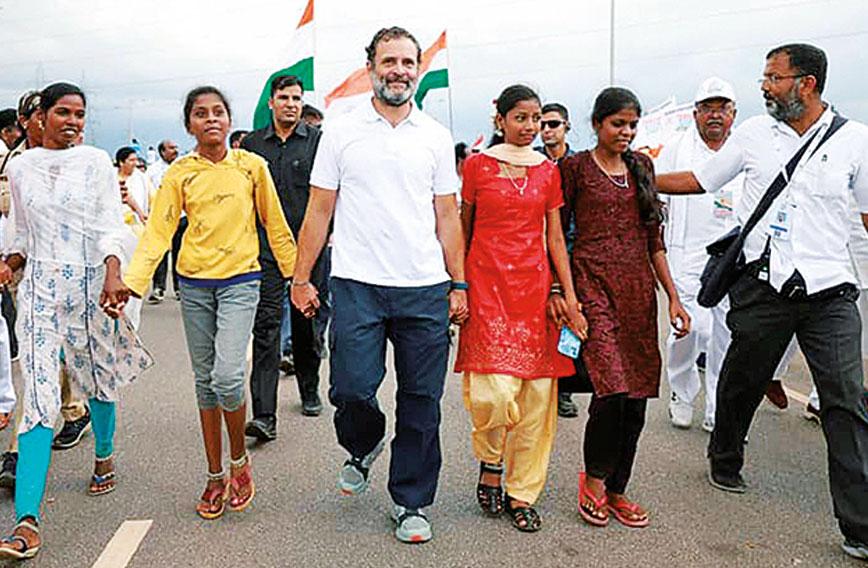 ON the eve of Rahul Gandhi’s padayatra political commentator Neerja Chaudhuri made a pertinent observation in a televised discussion. Almost every politician who has undertaken a padayatra to canvas support has been politically rewarded, she observed. Citing the examples of N.T. Rama Rao’s Chaitanya Ratham, Lal Krishna Advani’s Rath Yatra, Chandrashekhar and Y.S. Rajashekhar Reddy’s padayatra and the latter’s son Jagan Mohan Reddy’s ‘Odarpu Yatra’, Chaudhuri made the valid point that direct connect with people always helps in democratic politics.

It is, therefore, not surprising that Rahul Gandhi has been able to transform his image with his padayatra within days of setting out. All of a sudden, he has been able to shed his elitist image and the dynasty tag. Many, including this writer, who mocked him for his presumption that mere family inheritance would and could enable him to secure political leadership in a democratic society, have been re-assessing his potential.

While one will have to wait and see how the padayatra proceeds and what new tricks opposition political parties have up their sleeves to debunk him, the fact is that he has already scored a moral victory by demonstrating his direct connect with common folk. In the end, this is what democratic politics is all about.

Two factors may be contributing to the growing appreciation of Rahul Gandhi. First, the image of arrogance that has come to attach itself to several political leaders in positions of power. Second, the fact that the padayatra is clearly helping Rahul shed his dynasty tag and acquire the image of an underdog.

Consider the first. From Narendra Modi to Mamata Banerjee, from Arvind Kejriwal to Jagan Reddy, indeed from Yogi Adityanath to Pinarayi Vijayan, every politician in power mimics a Tughlak. Each one of them uses public funds and institutions and instruments of state to project their image and harass opposition. Whatever their personal traits, their public persona suggests that they not only project their power but seem to thrive on it. The public often admires them from a distance and concerns of security have widened that distance, but even when they are shown connecting with ordinary folk it is within a framework of power and pelf.

More to the point, the arbitrary governance styles of almost all these political leaders diminish the citizen and create a psychological distance between the leader and the common folk. Even when they lustily cheer their leader, the common folk feel they are lesser beings and the leader a personage on a pedestal.

Rahul Gandhi too sat on such a pedestal ever since he entered public life. His entire demeanour was of one who was entitled by the privilege of birth. The lowest point was reached the day he tore up an ordinance issued by the Union council of ministers in September 2013. His decision then to accept leadership positions within the party without a contest and his non-acknowledgment of his role in the party’s ignominious performance in the 2019 elections allowed the BJP to use ridicule rather than serious criticism to damage his image. The padayatra is certainly helping change that.

It is helpful to remind ourselves that each one of the political leaders who are in power today acquired their public status using the space offered by civil society and the freedom to organize offered by a liberal democracy. Narendra Modi’s rise was enabled by the freedom that he enjoyed campaigning around the country in his run-up to acquiring his own party’s leadership. Be it Mamata Banerjee or K. Chandrashekhar Rao or Jagan or Kejriwal, all of them mobilized public opinion, engaged civil society and acquired political power.

At a time when the space for such democratic political activism is being curtailed, when funding of opposition political activity is under stress, when dominant sections of mainstream media have become partisan in favour of the dominant political formation, traditional Gandhian techniques of civil society mobilization have once again become necessary. The padayatra is one such Gandhian technique of political mobilization. While the State can intervene more effectively to restrict and restrain a gherao, a dharna, and even a public meeting, it finds it more difficult to step in when common folk are merely walking in large numbers. No slogans. No destruction of public property. Just a silent march.

The Gandhian silent march has gained global currency as a form of both protest and mobilization of civil society. It is the silence that empowers the mobilization. We have seen this in Martin Luther King’s civil rights movement half a century ago and, most recently, in the protest of Iranian women against the imposition of a dress code. When the Arab Spring petered out many felt despondent that the power of civil society mobilization had run its course. However, the more repressive a regime, the more powerful the effect of silent mobilization.

Rahul Gandhi has so far done well not to address rallies and make speeches. Perhaps, as Swaminathan Aiyar has suggested, he could join singing sessions and participate in non-political activity. It is not what he says that seems to matter for now, it is what he does. At a time when visual mobilization is key and the more that politicians in office are seen with the swagger of power, succumbing all too easily to sycophancy and the arrogance of power, it is the smile of a tireless silent marcher that seems to attract public admiration.

Whether Rahul Gandhi and the Congress can convert all this goodwill into votes and electoral success is another matter. That requires an organization. It would be the task of the next party president to rebuild that organization.