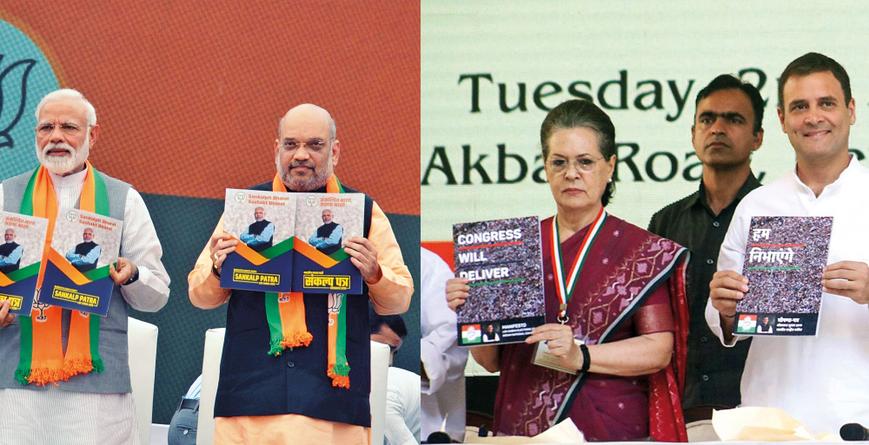 A party political manifesto is supposed to impart distinct brand identity to a political party and its leadership so that voters, as consumers of ideas, can take their pick. So what distinguishes one party manifesto from another? It is a difficult question to answer when so much in most party manifestos appears in so many others. Consider the manifestos of the two major national parties, the Bharatiya Janata Party (BJP) and the Sonia Congress. Substantial portions of each manifesto overlap with the other. Indeed, it was not an unfair comment or an exaggeration when Arun Shourie dubbed the BJP platform as “Congress plus cow”! That distinction, however, has been blurred after Rahul Gandhi turned the Sonia Congress into ‘Congress plus cow plus janeu’ in search of upper caste votes in Madhya Pradesh.

The economy performed much better during Singh’s first term (2004-09) than Modi’s, though it began faltering during Singh’s second term (2009-14) and picked up only slowly during Modi’s. On foreign policy and national security much is said on both sides in their respective favour but the bottom line is that there is no significant difference. If there has been a change it appears so far to be more episodic, as in the attack on Balakot terror camps in Pakistan. It remains to be seen if this episode marks a strategic shift.

While most of the text of the two manifestos run parallel to each other the visible differentiator is the focus of the first chapter of each manifesto. Chapter One in the Congress manifesto is on employment. Chapter One in the BJP manifesto is on National Security. The campaign thus far has kept the focus on these two topics, with the BJP emphasising public concern with terrorism and national security as the key issue and the Congress campaigning on the promise of more and better jobs. However, when it comes to dealing with the two challenges — of terrorism and employment — the solutions offered by the two national parties are not very different. Thus, even when they disagree on prioritisation of what is important to the nation and the voter they do not disagree radically on how to deal with a given problem.

An important issue that does distinguish the BJP from the Congress is, alas, the approach towards the Muslim community. The BJP dispenses with all minorities, including the Muslims, with a single sentence: “We are committed to the empowerment and ‘development with dignity’ of all minorities (Muslims, Christians, Sikhs, Buddhists, Jains, and Parsis, etc).” This sentence may as well have been dropped since it means nothing and certainly does not address the concern often expressed by the Muslim community across the country of being treated as second class citizens. The legitimacy of that concern is not the issue. The fact that it exists and needs to be addressed is and it is time the BJP faced the issue fairly and squarely since it is emerging as a pan-Indian national political party of government and is no longer the party of just ‘Hindu and Hindi’.

Just as the Sonia Congress has to end the domination of one family — of Sonia, her children and grandchildren — if it wishes to be regarded again as the Indian National Congress, a normal national political party and not just another feudal outfit, like so many caste-based regional parties, the BJP must normalise its approach to the Muslim minority if it wishes to be regarded as a truly normal national political party. I know it’s a tough call. The Sonia Congress cannot think of life without ‘The Family’. The BJP does not know of life with the Minorities. The Congress needs a new imagination to throw up new leadership. The BJP needs more imagination to genuinely reassure minorities.

So, while the Congress and the BJP may have similar views on economic policy, foreign policy, social welfare and national security, both suffer from the burden of the past — the legacy of the Nehru-Gandhis in one case and the memory of Muslim rule in the other.

What of the manifestos of the many regional parties? Does it matter? Is there much to choose between the DMK and the AIADMK in Tamil Nadu, the CPI(M) and the TMC in West Bengal, the TDP and the YSRC in Andhra Pradesh? Tweedledums and Tweedledees. Odisha and Telangana are different because in neither state is there any opposition party of any consequence. Bihar may be the only exception. Nitish Kumar scores over Lalu Yadav’s family.

So on what issue will this year’s national election turn? It seems the decisive factor is leadership. The BJP has a leader of national standing. Others do not. The non-BJP parties refer to 2004 and how Manmohan Singh emerged out of the shadows to lead a non-BJP government. Will that be a possibility on May 23? The answer would depend on the numbers. So far the bets are that the BJP and its friends will have the numbers to return Modi to power. If the BJP falls short on numbers, a Deve Gowda Mark-II or a Manmohan Singh Mark-II will have to step out of the shadows.