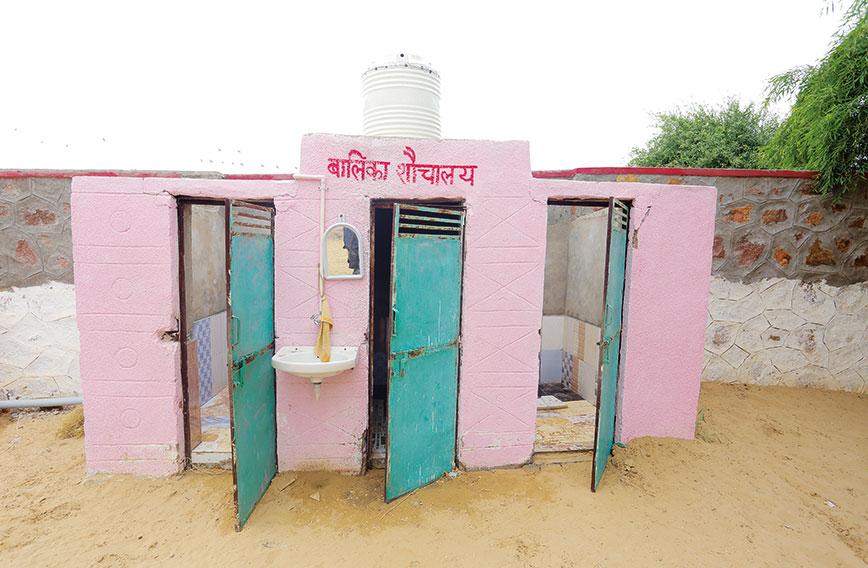 The story of toilets and schools

After landing at Jodhpur airport, I proceeded directly to the ‘Event with Teachers from 15 schools in the Cluster’  with my colleagues in the district. By the time we left the venue of the event, it was 7 pm. The journey to the district headquarters was around three hours. In the car, several issues were being discussed. Prominent among them was that of toilets in schools.

One of my female colleagues pointed out the acute difficulties  they face while travelling in the interiors. Neither schools, nor   fuel pumps were equipped with usable toilets. And where they existed, they were either dirty or lacked water connections. Some of our women colleagues contracted serious urinary tract infections to the extent that one of them had to be admitted to the ICU. It was a miracle that they still travelled to remote areas.

As a result, they had to resort to drinking very little water (again, a health hazard in desert areas) or innovative methods like use of PeeBuddy — a portable female urination device that makes urinating in public toilets easier for women by saving them from urinary tract infections.

The local administration has been making several claims of having constructed thousands of toilets in rural areas, including in schools. Our general experience was that while in some schools toilets were available, they were almost unusable due to lack of water or lack of civic sense about usage.

The next day, I visited a four-year-old government ‘Model School’ located near the district headquarters. For those who are unfamiliar with the concept of a Model School, it is seen as similar to the Jawahar Navodaya School system, except that the Model School is not a residential school. The school, meant for students of Classes 5 to 12, is expected to be fully equipped with CBSE curriculum, libraries, laboratory, computer labs and smart boards that are wi-fi enabled. In fact, the school is also a centre for receiving and broadcasting training programmes for teachers and other education functionaries.

From a distance, it looked very impressive, akin to a large college. The school had the right teacher-pupil ratio, a wonderful reception area and large rooms for the principal as well as the staff. Impressive slogans were all over the walls. The principal, an energetic and well-meaning person, was proudly taking us around the building. The large rooms of the chemistry and physics laboratories had no equipment and wore an empty look.

The principal apologetically stated that they were waiting for the necessary equipment — which meant that there had been no activity in these labs for the past four years. The same was true of the computer lab. The only room that had some interesting equipment had it because it was donated by a large corporate house under their CSR programme. However, the students were not allowed to use this room for fear that the equipment would be damaged.

Probably the most shocking thing was the state of the boys’ toilets which I entered. Apart from the strong stench, what was appalling was that the doors of the only lavatory had broken right in the centre as well as from the hinges, rendering it completely unusable. While the school building was merely four years old, it was already showing signs of needing serious repairs and painting. I could see the helplessness on the face of the principal. He was neither able to influence the powers-that-be to supply necessary equipment to the science and computer labs for the past three years, nor did he have the budget to carry out the repairs that were so essential to run the school.

A week later, I was in a school in Karnataka, again, in a very small village near the block headquarters. While having a very useful discussion with the principal and the teacher, I wanted to visit the washroom and was guided to the toilet meant for teachers and disabled students. I could not use the toilet since it was full of dirt and had no water. I returned to the principal’s room and, at an appropriate opportunity, raised the issue of the absence of a toilet for the 100-odd children in that otherwise beautiful school. The principal expressed her helplessness about the state of affairs and gave a long account of various efforts made with the panchayat and other authorities to get a water connection.

A year ago, in another school about 30 km from Dehradun, it was a real pleasure to engage with the principal of the school on educational issues that she was dealing with innovatively. She was also proud to show us two new toilets that were constructed from the budget under the Swachh Bharat programme.

When I asked her why they were locked and not being used by students, I saw mixed expressions on her face, the most prominent being that of helplessness. She  said there was no budget to draw the water pipeline from the nearest water centre and hence there was no water.

When the Azim Premji Foundation began its work in 2001, the government itself had reported that almost 80 percent of schools did not have functional toilets and close to 60 percent of schools did not have satisfactory drinking water facilities. The Sarva Shiksha Abhiyan brought in significant changes and infrastructure-related improvement, including toilet construction.

The common thread in the above stories from the ground, across four different states, are: (a) a significant number of schools, even today, do not have functional toilets; (b) many toilets do not have  water connections and hence are almost unusable; (c) schools have not been empowered to make the toilets functional or to maintain them; (d) a culture of using toilets appropriately and maintaining them well does not exist; and (e) wherever problems persist, the schools are helpless since they  have neither resources nor authority to achieve working toilets.

It required the prime minister to announce  a Swachh Bharat Yojana after nearly 67 years of Independence. Many educated urban people even made fun of this announcement as well as the programme, without realising the importance of what it could do to our nation, considering the pathetic ground reality.

Significant budgets have been allocated and the PMO is making an attempt to monitor progress. We need to keep in mind that it is not possible for one prime minister or one office (however high that office may be) to implement and monitor the programme, unless bureaucrats and officials at all levels make a concerted attempt to implement the intent of the programme.

Like in many other cases, we have no dearth of announcements; the real issue is meticulous, timely, and quality implementation!