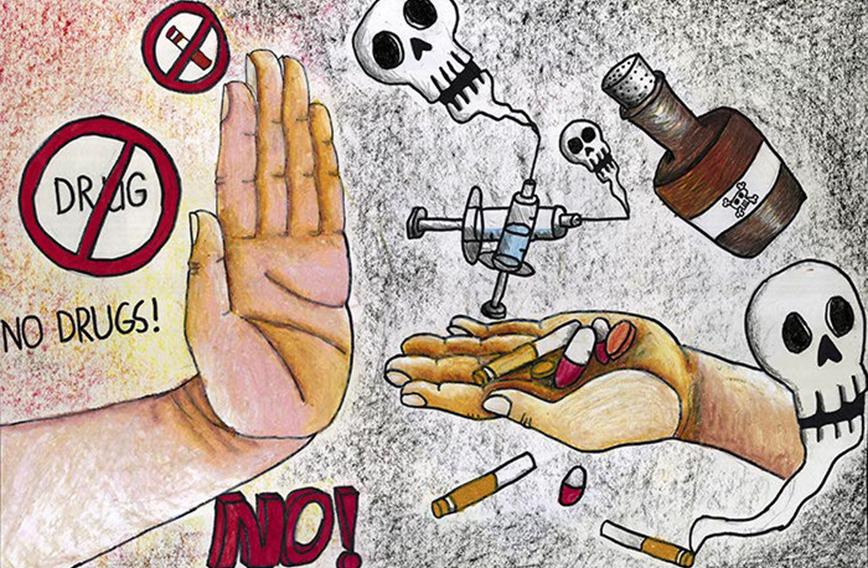 On a dangerous path

Back in 1998, I spotted boys and girls in their school uniforms, probably from Classes 8-9, frolicking with beer in a Bengaluru pub around lunchtime. It was a regular school day and, obviously, the students had bunked school to be in the pub. More important, they were not of the permissible legal age to consume alcohol and the pub owner was blatantly violating the law. My friend, who lived in the US, began narrating stories of alcohol and substance abuse among American students. At the end of the discussion, we both dismissed this as an urban phenomenon and blamed the parents as well as the pub authorities for the profligacy of the students.

Exactly 20 years later, I came face to face with the reality that substance abuse is spreading its tentacles even in rural India in some states. We were listening to the experiences of a group of community workers associated with the Azim Premji Foundation in a district in north India where our foundation has presence at the grassroots. One of the community workers stumbled on a few cases of children addicted to various kinds of illicit substances. She decided to delve into the issue of substance abuse among school and college students in her vicinity. Her reports shocked and saddened us.

The most surprising finding was the extent of the problem. Almost 70 to 80 percent of students in the schools she worked in, especially from Classes 11 and 12, were found to be indulging in the consumption of some kind of illicit substance just for the heck of it. Boys are more vulnerable to substance abuse than girls, however it is not that this problem is totally absent among girls. While affordability is relatively higher for children in private schools, the problem prevails equally in both public and private schools. The starting can be very diverse — it could be something as simple as parents consuming alcohol at home to peers consuming substances and initiating the uninitiated by challenging them to try it out. The range of substances abused is wide — khaini, gutka, cannabis, bhang in various forms, readymade drugs, whiteners used in furniture making, Corex and, of course, various forms of alcohol.

What is the profile of more vulnerable children? They come predominantly from families living in abject poverty or experiencing continuous quarrels between the parents or a particularly spoiled relationship with a family member. There are families where there is practically no dialogue between parents and their children. Nobody talks to them about their life in school, studies, the interesting aspects of life, and so on. Such children also come from rich families which provide handsome amounts of pocket money to their children but show no interest in their existence beyond that. The profile includes children who find academic subjects in school irrelevant and boring due to the way they are taught. Many children get humiliated and abused by teachers who even deride their parents’ poor socio-economic status. Some children do it for the thrill of it, others do it because it gives them a ‘high’ and makes them forget their problems for at least three or four hours.

Without doubt, drug abuse is expensive. The paper to roll the substance in, costs between Rs 3 and Rs 8 each time (depending on its quality). While substances like khaini, gutka, whitener, Corex and inferior grades of alcohol are at the lower end, drugs like hashish and other chemicals are very expensive, costing anything between Rs 500 and Rs 1,000. Many farmers in certain districts have begun regularly cultivating cannabis to sell it illicitly to channels that make huge money. Needless to say, sourcing and distributing drugs is a very organised racket and everyone involved does it for the money without caring about the lives of children or adults.

The effects of drug abuse on these children and their surroundings are obvious. Such children are disinterested in taking part in the school’s routine activities such as studies, sports, recreational events and the like. They are constantly trying to run away from normal groups of children and teachers in school. Some of them frequently want to visit the rest rooms/toilets during the period in class. Drug abuse detaches children from mainstream activity, distances them from their families, and leads them to commit petty crime to get resources — such as stealing money, fighting with their parents for extra pocket money and so on.

There are extreme cases where children have said they were willing to kill their fathers in anger for not providing money to buy substances. The families are shattered. Parents get fed up since they don’t know how to respond. There is also the issue of the family’s reputation (izzat) being ruined. In certain cases, parents are willing to hand over the child to the police or law enforcement authorities. Some parents said they were waiting for the child to die. Overall, it is utter misery for the family. The peace of the family is shattered. In certain cases, it ends with death due to acute ill health or the child committing suicide or the child landing up in a ‘remand home’.

Parents, teachers, school administrators, members of society and law enforcement authorities all need to act against the menace of substance abuse in a concerted manner. It has already gained the proportions of an epidemic. In pockets, it is an emergency since there is the grave danger of generations being engulfed by this epidemic. The problem is complex and multidimensional and remedies are not easy to implement. The world at large is struggling with the drug menace.

However, some concrete actions are possible. Probably the uppermost among them is preventing the cultivation, distribution and availability of illicit substances by not only the law enforcement machinery but also by vigilant school administrations and civil society. Even in remote and comparatively smaller rural populations, it is possible to form anti-drug groups that could effectively spread awareness, identify points of distribution and create an anti-drug environment. This includes spreading awareness among parents to spot early symptoms of loneliness, and promote dialogue and engage in some coaching on how to deal with initial stage addiction — through counselling and not scolding, threatening or beating.

Many more civil society organisations / NGOs have to play an active role. Teachers must pre-empt any action that would alienate students from the learning process and develop a relationship of individual care and attention. Discussions must be held with students who are vulnerable to such abuse. Teachers need to develop the capacity to notice early symptoms. The parents and teachers relationships with the child probably exert the deepest influence on the child. In appropriate cases, reasonable threat of law must be communicated.

At a broader level, society needs to develop higher scruples on this issue. Even a criminal like Don Vito Corleone in The Godfather refused to deal with the drug business despite knowing the profits involved! It is a matter of our children’s lives being at stake.