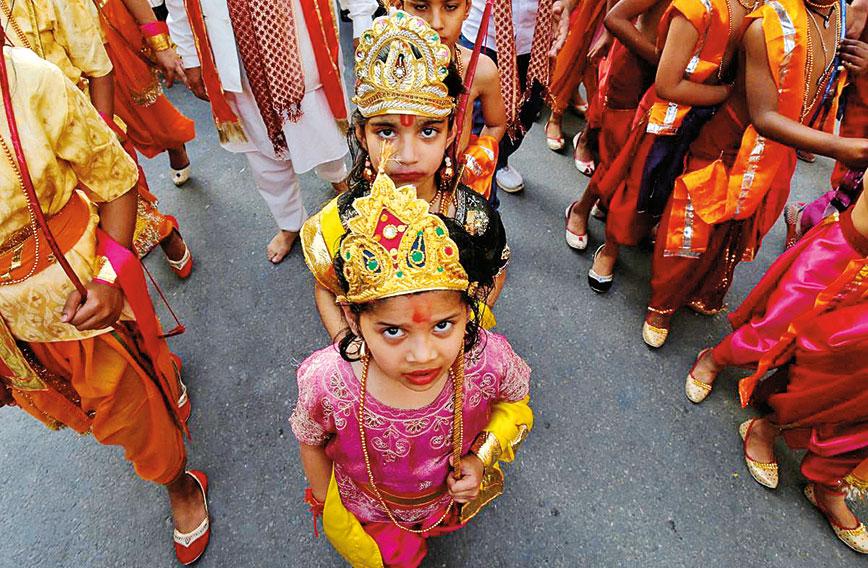 For about 18 years of my working life I lived in an upscale Mumbai neighbourhood and my children grew up during this period. It was very convenient for us when they both secured admission in a so-called premium private school that was barely 300 metres from our house. They studied in that school from nursery to Class 10. While my wife took complete charge of all affairs related to my children, my role was more clerical —filling in all kinds of forms that were required to be submitted to the school from time to time.

During the school admission process, among the plethora of queries we had to respond to, was a question seeking information about our religion. I found it odd and unnecessary. I wrote ‘Not applicable’ in the column. My wife was apprehensive that writing ‘Not applicable’ would adversely impact our children’s admission into a school that we wanted very much as it was convenient for us. I explained to her that (a) nobody reads each and every column (b) in case they do read it, they won’t bother (c) I would love it if they read it and asked us. I would then get a wonderful opportunity to explain why I put down ‘Not applicable’.

As I predicted, the school never asked about it. But the matter did not end at the time of admission. Every year, we had to fill in an updated form at the beginning of the academic year and I would write the same thing. My wife, as a very caring and concerned mother, was worried about the impact this might have on our children. As they grew older, I explained to them the reasons for my response. I said it was not necessary to know the religion of a child unless there was some decision/benefit linked to such information. The children quickly grasped the point. Right from the time they began understanding the world around them, they had not seen any overt religious practices at home. While my daughter was in passive agreement with my point, my son began questioning the relevance of religion very aggressively from the age of six. By the time he became an adult, he had concluded that many conflicts around the world are centred around the fanatical religious beliefs of ethnic groups.

During my childhood, way back in the early 1960s, both in my neighbourhood and in my school the one message that we received was about how India had been attacked several times by Muslim invaders and how we must always be worried about their intentions, and so on. Our Class 4 social science book, titled History of Great People, glorified several greats such as Bal Gangadhar Tilak, the Rani of Jhansi, Subhas Chandra Bose, Vallabhbhai Patel, Mahatma Gandhi, Jawaharlal Nehru, Veer Savarkar, Maharshi Karve, Jyotiba Phule and the like. The most prominent stories were of Chhatrapati Shivaji, Prithviraj Chauhan and Maharana Rana Pratap —with detailed descriptions of how they fought to protect the Hindu Rashtra. This, coupled with huge dosages of the mythological stories from the Ramayana and Mahabharata, had a great impact on my young mind. Lord Vishnu was my greatest hero and in my peer group, we preferred Mukesh, Kishore Kumar and Manna Dey over Mohammad Rafi, just based on the singers’ religions. We hated Naushad and loved Shankar Jaikishan, based on mere religious considerations. Beyond this religious divide there was also a message about caste — I still remember the reaction of my friend’s mother when I allowed our barber to take some water from a bucket I was carrying on my cycle.

And yet, my closest friend in class during my schooldays was Mohammad Daruwala. The house where we invariably stopped to drink water after our evening’s play was that of a family that was said to belong to the lowest caste among Hindus (often referred to as ‘untouchables’). Despite the pure vegetarian culture that prevailed at home, I used to enjoy the egg pakodas that my classmate, Sunil, would bring in his lunch box.

During my college days, almost all my friends  came from diverse communities and strata of society and not just from one kind.  And the same was the case with my children. As I grew older, I began regarding Mohammad Rafi as an all-time great singer of Bollywood and Naushad became among the top three favourite music composers of my choice. The more I thought about life rationally, the more I became an agnostic.

So the question is, how did we rise beyond our neighbourhood ‘sanskar’? How did we ignore the loud messages from our parents, our textbooks and teachers (though it was less from the teachers)? How is it that by 23 years of age, I had become an agnostic?

To begin with, I can attribute it to my parents. While my mother was a God-fearing traditional person, she was not fanatical about imposing her beliefs on her children. My father, while he believed in God, was a rationalist. He disliked all the rituals my mother would perform and was pretty vocal about it. Secondly, while our textbooks were oriented in a certain way, my school (which had over 2,200 children) did not show any visible signs of recognising or promoting religion in school affairs. Some of our teachers were very pragmatic and never encouraged any visible discrimination based on religion or caste in school.  Above all, the kind of education we went through, made us independent and free thinkers. Our rational instincts overtook everything else since we could not find any differences among people based on their religion or caste.

One of the important roles of education is to promote Constitutional values such as democracy, equity, secularism and socialism. Most teachers, education functionaries and members of society don’t have a good understanding of what the word ‘secular’ means. It simply means that the State has no religion. That no decision by the State will be made on the basis of religious considerations. At the same time, the same Constitution recognises the ‘right to practise one’s own faith’ as a fundamental right. Extensive education on this aspect ought to be an integral part of our teacher preparation, our teaching-learning practice and our demonstration of practices in the education system. Only then can we aspire to develop children with a truly ‘secular approach’ in life.