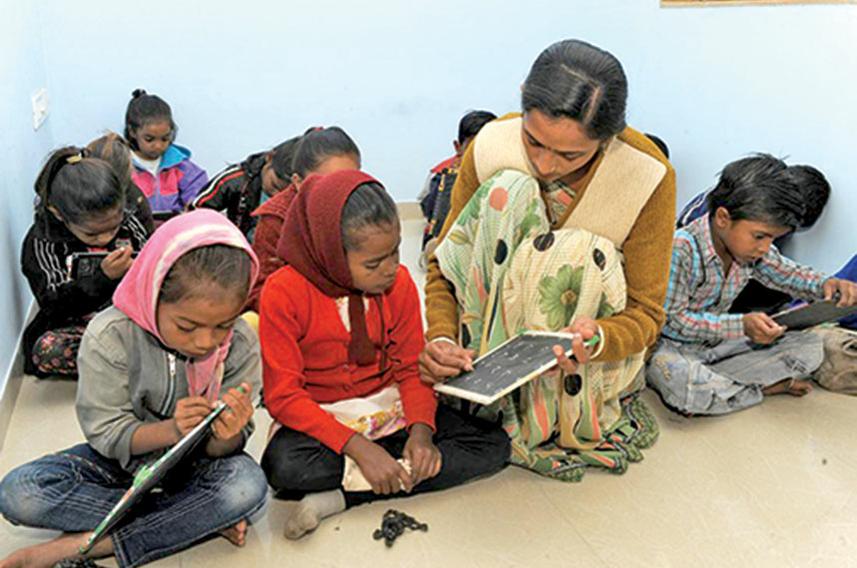 It was 2008 and the commissioner discussed with us the idea of designing workbooks for all government schools in the state to supplement the textbooks which in his opinion had some gaps. We thought the idea was great since it provided us an opportunity to not only develop some quality workbooks but also interact with the three lakh-plus teachers on how to use those workbooks. We developed the workbooks in collaboration with two other organisations and, just when they were ready to be printed, the commissioner was transferred out. The new commissioner expressed inability to print the workbooks since there was no budget.  We were disappointed.

In the meantime, another state learnt about the workbooks we had developed and members of the State Council for Education Research and Training (SCERT) visited us, requesting us to share the new workbooks. We explained that we would be very happy to share the workbooks but had a few conditions/requests for the state. They must create a team of high-quality academics to design workshops to develop teachers to use the workbooks to change their perspective and teaching-learning methods.

Unfortunately, the state took the workbooks and simply printed them to distribute them to all the elementary schools in the state — without developing the teachers for using them effectively. This is the way most actions get driven in the states — jobs such as printing, purchases of equipment and so on are promptly carried out but the issues related to practices, perspective and culture are not addressed. Nor is any effort made to orient teachers to meaningfully use the material developed.

Around six years ago I was invited by a donor organisation to join a panel of three members to evaluate the work of a very large not-for-profit organisation. Since I respected both the donor and the non-profit, I agreed to join. The evaluation included meeting and interviewing several stakeholders associated with the organisation’s work. The members of the non-profit prided themselves on having been associated with curriculum reforms and new curriculum development in two states in India. In order to test their conviction, we asked them why they felt their work of curriculum development was so important when the earlier curriculum had never reached the teachers and educators. We also asked them whether they found any connect between the curriculum and  classroom processes. After much discussion, there was unanimous agreement that even if they revised the curriculum it would be of no significance if they did not reach it to teachers and to the classroom. That involves special effort. A component that was almost always missing in their work and that of the state was implementation of the curriculum.

The past six months have witnessed a heightened debate on the New Education Policy for India. Recommendations from several states, bodies, associations, academics and NGOs have been obtained. A high-powered committee was appointed to listen to people and develop a draft policy. The committee has already made its recommendations public. Critiques are awaited from all stakeholders. Several sub-committees of the Central Advisory Board of Education (CABE) have been simultaneously established to discuss identified areas that range from how to improve the overall quality of public schools to issues related to gender, mid-day meal programmes and so on.

The question that comes to the minds of several people closely connected with education in this country is: What would all this lead to? Is the New Education Policy going to be a panacea for several issues baffling us?

The National Policy for Education, 1986 (modified in 1992) has existed for the past 30 years and included some comprehensive recommendations to implement quality education in India. A closer analysis would reveal that several important policy recommendations have not been implemented by successive governments. The National Curriculum Framework was last reviewed in 2005 and presented some radically different ideas of subject, perspective and pedagogy. However, it was not implemented through necessary modifications in the National Council for Teacher Education (NCTE) curriculum and in-service teacher development efforts.

To strengthen the rights of children and parents, the Right to Education Act was approved by Parliament in 2009 but most schools have not implemented the majority of its provisions even after seven years. The National Policy for Education had dealt with important issues such as goals and objectives of education, connect of education to achieving societal goals, creation of an Indian Education Services, top-quality institutions such as the University Grants Commission (UGC), the All India Council for Technical Education (AICTE), the National University of Educational Planning and Administration (NUEPA), the National Council of Educational Research and Training (NCERT), and the District Institutes of Education and Training (DIETs); management of education, continuous review of institutions’ performance and closing/restructuring them, as necessary; examinations to drive the quality of education; merit-based teacher selection and development and so on. Both the quantitative and qualitative implementation of these critical issues has not happened.

Concurrent to formulation of policies, investments should have been made in universities and schools in education that developed competent professionals who could ensure quality implementation of policies. As a result of failure to do so, we have a serious shortage of high-quality educationists and academic resources who understand education in depth. Several panels during the past 10 years have recommended developing a pool of at least 500 people in every state who could significantly contribute to the education quality in the schools. The recommendations have remained on paper.

Practically every recommendation of policy involves significant people resources, political will to implement the policies and, most important, budgets. All discussions of implementation stop at lack of availability of sustained funds in the states as well as at the centre. It is not a question of one-time funding. Money is needed to create several enabling conditions to implement the spirit of each component of policy.

Education is supposed to develop young minds for the future and, therefore, has to be essentially futuristic. A careful analysis of the future that we envisage is necessary to articulate new policy.

Yes, several contexts of the 1986 National Policy for Education have changed and a review of the policy is needed for today and for the future. However, simultaneously, we have to commit necessary resources, human and financial — if needed, almost four-fold.

Illustratively, more than 10,000 high-quality academic resources are required to be recruited in close to 700 DIETs. It would easily need an additional budget of more than `800 crore each year. And this is just one item. If the government has to implement its own commitment to provide cooked meals of certain nutritional value to every child, you need a budget of at least `25 per meal. This may need trebling the existing budget.

While education should continue to be a concurrent subject, budgets must be made available for each state — irrespective of affordability and income. If we are establishing 30 central universities to develop education professionals, they must be funded in such a manner that they can drive high quality in every aspect of their functioning. The idea of funding them just for five years and expecting them to be self-sustaining later is unworkable. Most developed nations have premier education institutions that run on philanthropy or government support. There is no other way to run institutions — if you want to provide autonomy to such institutions and not exploit the students.

Assuming we are able to finally release an extremely relevant New Education Policy, the danger of the policy remaining on paper (like the earlier one) is very real if we don’t enable its genuine implementation with necessary people and budgets.