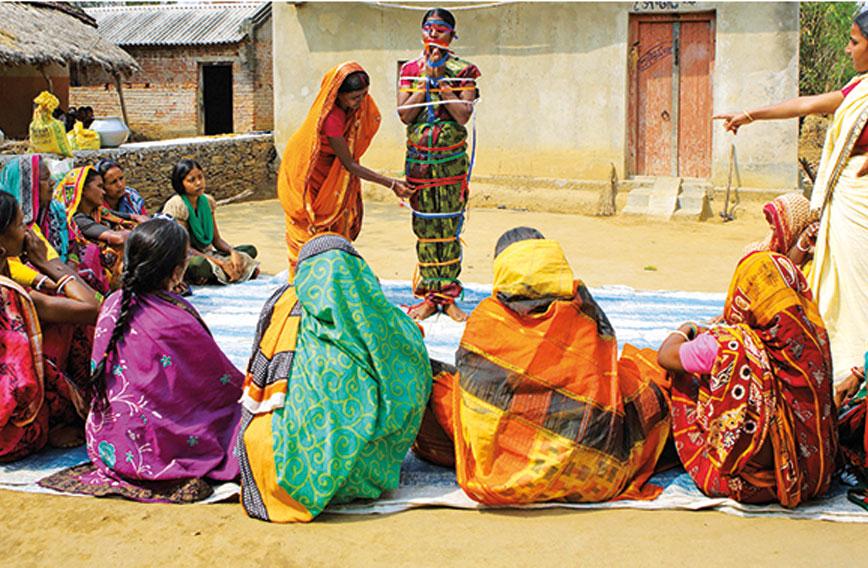 Women talk out domestic abuse with a little help

Rajni was in deep distress. Her husband and in-laws shunned her. Her father and brother had rebuked her. The villagers approved of the jati panchayat’s decision to punish her because they agreed that she had brought shame to her family.

Rajni’s fault was that she had dared to restrain her brother-in-law’s hand when he was beating her. Her brother-in-law felt humiliated. He could not believe that a woman of his house would resist him. He had only been punishing her for her misconduct, he felt.

Three months later, a trained para-legal worker, Reena, came to the village, Udadna, to teach the women, mostly about issues of domestic violence. To support women in distress, Reena used to go to the block headquarters, the police station and other places. But her husband did not want her to go out for work, believing she had relationships with other men. He used to remain inebriated most of the time and, lately, had started beating and abusing her. When she resisted he called the jati panchayat.

Reena was fined `1,000 by the jati panchayat and told to respect her husband and follow his orders. She stopped going out for work. Her husband, however, didn’t stop abusing her. In fact, he became more violent. And the leaders of the jati panchayat did not intervene on her behalf.

Such stories are fairly common at the grassroots.

Reena is from Narayanganj block in Mandla district of Madhya Pradesh which lies in the vicinity of the Kanha National Park. Gonds and Baigas are the predominant tribes living there. Although it is believed that tribal women have more freedom, cases of violence against them are frequent and community customs are primarily biased in favour of the men. The women themselves believe that there is nothing wrong with such norms. They succumb to atrocities without resistance, fearing repercussions if they were to resist.

To tackle domestic violence, PRADAN (Professional Assistance for Development Action) mobilised more than 10,000 women into Self-Help Groups (SHGs) in Narayanganj. The women further congregated in village-level clusters (VLCs) and block-level federations for mutual support and solidarity. Women discuss and resolve issues related to their lives and livelihoods in such forums. An issue that often surfaced was violence against women. Many women had been victims of violence and abuse. The topic generated varying views from the women. Some waved it away, saying it was a common household problem and the women should think of their livelihoods instead. This is the fate of women, we should just bear it, was their response.

But other women said, domestic violence isn’t only about our rights but also about equality and respect. If there is no equality, what is the point of such meetings? Finally, it was decided that domestic violence needed wider discussion with SHGs and at cluster meetings.

PRADAN trained selected women as Gender Sathis in Narayanganj. Topics such as gender and sex, gender and patriarchy, and gender and violence were discussed and debated. The Gender Sathis created awareness. Women who would earlier shy away from discussing these matters now found a safe space in the SHGs and the VLCs to talk openly about such issues.

Gender Sathis reached out to women who were suffering silently. Among them was Reena. Encouraged, she started working as a para-legal worker again. She knew the law. She knew that whatever was happening with her was wrong. Finding support from other women, she filed an FIR under Section 498A of the IPC (Indian Penal Code), a non-bailable offence. Her husband was immediately jailed.

Due to pressure from her relatives and the villagers, Reena withdrew the case after a month. Overwhelmed by the experience, her husband mended his ways. He no longer interfered in
Reena’s work.

Reena’s case was highlighted as a success story. If she could stop violence against her, why couldn’t the others? Taking their case to the jati panchayat served no purpose. In fact, the panchayat’s support of the men and penalisation of the women hiked the men’s impunity. Taking up the matter legally, through the police and the courts, could be an alternative solution.

But whereas women like Reena, who were more exposed to the outside world, could take their case to the police, it wasn’t easy for other women to do so. First, they would be dependent on others for support. Fighting legally involved the hassles of visiting the police station, going to court, bribing, and so on. Officials weren’t always cooperative or sensitised to handle such cases. Moreover, such steps meant facing the ire of their family members. Women wanted to live peacefully with them. They did not want issues about their family and village to go to court. Also, all cases were not of violence. There were varied issues, which could be better dealt with at the community or village level.

Apart from the jati panchayat, there was also the Shaurya Dal at village level, comprising five women and five men. This group had been promoted by the Madhya Pradesh government. Members of the Shaurya Dal were selected by the gram sabha. Their role was to curb violence and atrocities against women and girls, with the philosophy that the solution to such problems lies within the community. But the women were unaware of the Shaurya Dal.

Many cases were taken up, analysed and options decided on. Sensitising men, role reversals and constructive dialogue had a positive impact. The Shaurya Dal was exposed to the police station, the block and district headquarters, and the Women and Child Development department.

(Names of the women have been changed.)

Sumita Kasana is an executive, Research and Advocacy, at PRADAN. Bharti Raghuvanshi is a PRADAN executive based in Narayanganj block.