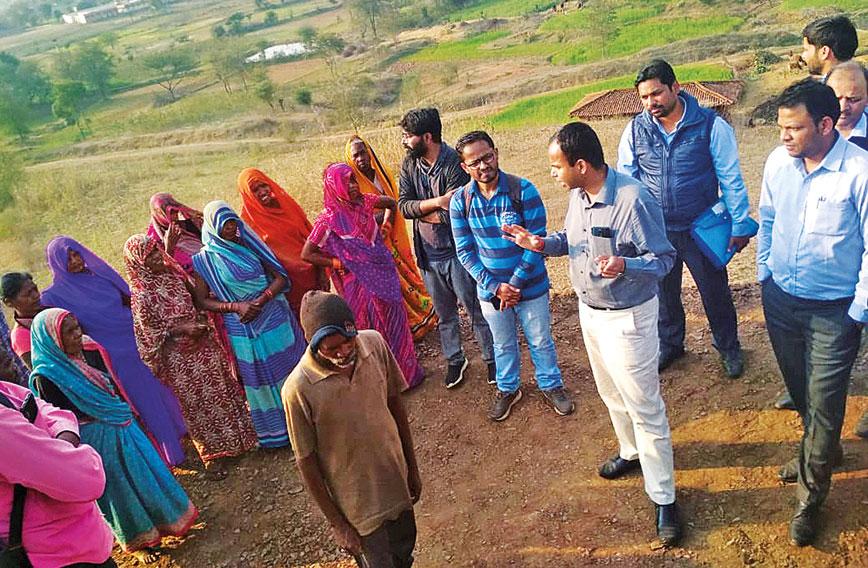 During our transect walk through Chataniha, a village in Singrauli district of Madhya Pradesh, Ramkali and Munni explained how their lands were losing topsoil due to ploughing and subsequent rain. The same issue was raised by many other villagers such as Budhni, Sugmanthy and Bitty Panika in the meeting held after the walk.

We saw rocky barren lands everywhere as we walked through the village. When we asked villagers in the meeting, “khet ki mitti kaha gaye?” (where did the topsoil go?), Munni, with her usual sense of humour replied,  “meri khet ki mitti toh Shanti didi ke paas hain”(soil from my land went to Shanti’s land). Munni’s land is on the upper side of the hillock. Every year her family members plough the land to grow food crops, but with rain all the loose topsoil gets washed away and deposited in the valley, where Shanti has her land.

Eventually the entire research team came up with an innovative solution to address the issues of soil erosion faced by the villagers of Chataniha.

Chataniha is a village in Deosar block of Singrauli  district in Madhya Pradesh. Nearly 80 to 100 years ago, people from the Gond community, who constitute 90 percent of the total population, first settled here. Later,   more Gond families, displaced during the construction of the Rihand dam, were rehabilitated here in the 1950s. The terrain in this part of Deosar is highly undulating characterised by small hillocks with steep slopes, more than 30 percent in most cases, and narrow ribbons of streams in between. However, the Gonds converted the streams into paddy fields by constructing bunds and started cultivating rice for their own consumption. They also used to cultivate some millet, mostly kodo millet and kutki (little millet) on the hill slope.

According to Shanti and other villagers, some upper caste (Brahmin) families came here in the mid-60s. Gradually, the upper castes encroached on the converted paddy fields using their connections at different administrative levels. The Gonds were, by and large, left with the hill slopes. Extensive ploughing on high slopes loosened the topsoil leading to erosion. After 10 to15 years of cultivation only rocks and pebbles remained making the lands unsuitable for agriculture. Villagers had to search for newer patches.

Several interactions with the villagers revealed that they were fully aware of the adverse effect of ploughing on  land situated on a high slope. However, they had no option but to plough those lands to grow crops as it was the only cultivable land they had.  Indrabhan Singh, one of the villagers, said in the meeting, “Pehle to bachna padega, uske baad bhavishya ka sochna padenga. Aap batao hum kya kare. Kheti na hi karenge toh khayenge kayse?” (first we have to survive, after that we can think about the future. You tell us what to do. If we don’t do agriculture what will we eat?). None of us had any answer to this.

Back in the PRADAN office, we searched all possible sources of information to find suitable measures to check soil erosion in a similar topography in the Central Indian Plateau (CIP). We could find options such as plantations or pastures. One of us came up with the option of terrace farming which is practiced in other hilly parts of the country. 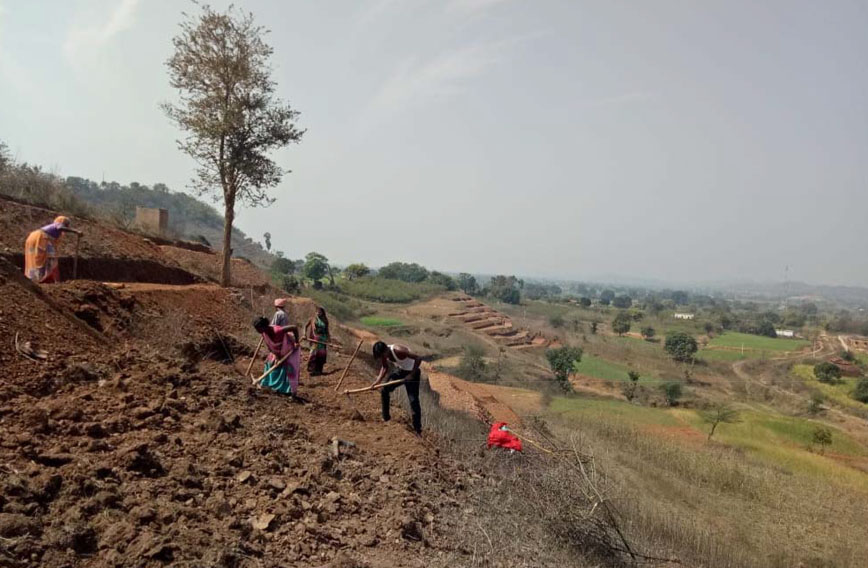 Villagers work together to build the terrace field

We started calculating the feasibility of terracing on Chataniha’s rocky landscape. From calculations we found that the cost of construction would be too high compared to possible returns. We were thinking of creating narrow strips less than half a meter in height for each step of the terrace. The terrace might collapse during intense rain if constructed with a wider strip and more height between strips.

However, that would make it impossible to use a bullock-drawn plough. The bullock wouldn’t be able to move on to narrow strips. If we made wider strips, the height between the strips would be more and bullocks would not be able to climb to reach the strips. So, we almost discarded the option as being inappropriate for Chataniha’s small and marginal farmers.

However, a colleague from Deosar told us that a farmer from Himachal Pradesh, who was the father of one of our colleagues in PRADAN, had come and taught farm-terracing to a few villagers in Sarrah, another village in Deosar. We rushed to this village to see the work there. We were amazed to find that three farmers of Sarrah had made farm-terraces on their land which had a similar slope as Chataniha under the guidance of the farmer from Himachal Pradesh. The vertical portion of the terrace was pitched with grass. That was the fourth year after construction and the entire patch was stable.

Ramswarupji, one of the farmers in Sarrah, said that crop output had increased manifold after he started agriculture on terraces. The soil quality had gotten better. We saw a ray of hope and arranged an exposure visit for the villagers of Chataniha to Sarrah.

The villagers of Chataniha discussed the possibility of experimenting with farm-terracing on a few patches of land in subsequent meetings. They also discussed the specific issues which needed to be looked at in their context. Some of them were:

The first two concerns were difficult to resolve as broader strips would have meant more height between strips. But, higher steps are difficult for cattle to climb and are also more costly. After a lot of calculations and deliberations the village community decided the length and breadth of the steps for the patch they had decided to experiment with. They opted for wider strips that would allow a pair of bullocks to move with the plough. The height between the two strips was almost one meter. However, they came up with an innovative solution for the movement of cattle between strips: they made a small alley on one side of the terrace which the bullocks could climb upand reach the strip above for ploughing.

For stability of the terrace they decided on stone pitching as they had plenty of stones available in the village. Alongside, they explored the possibility of grass pitching and plantation of sisal (Agave sisalana). As the lands here have a very thin layer of good soil, they decided to first dig out the topsoil and store it somewhere on the field. After construction of the terrace, the topsoil was spread on all the strips. 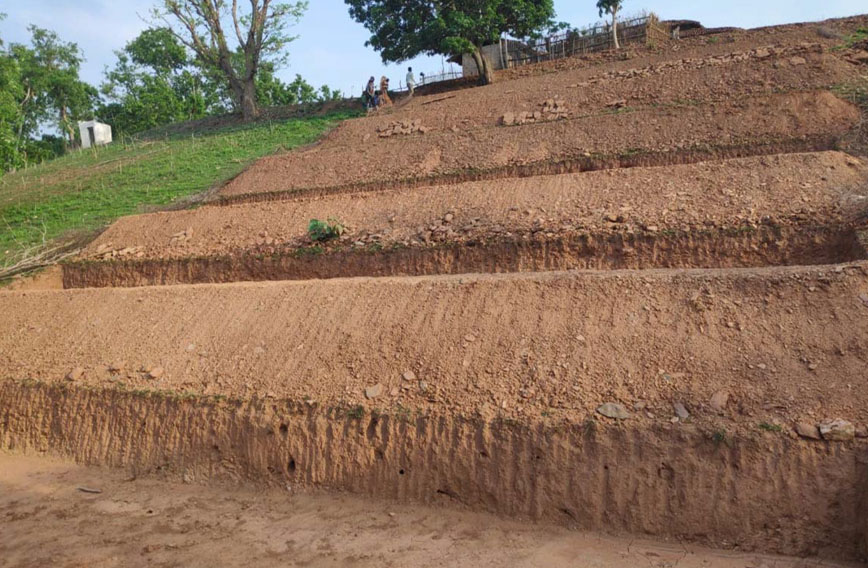 A patch of land that has been terraced

Ramdulare and his wife Lalwa were the first to come forward to try this on their field.  Then, Sugmanty and Fulkali followed suit. Around 13 volunteers of different ages and gender finished four stairs in Ramdulare’s field in two days.

Eventually terracing was done on three patches of land (on two acres) in Chataniha before the onset of the monsoon this year. It is a context-specific model of farm-terracing. Villagers invested their own funds and labour. The PRADAN team and villagers explored the possibility of mobilising funds for better and quicker implementation from different government schemes.

District authorities visited Chataniha and got convinced about the feasibility of farm-terracing. They included it in their shelf of work under MGNREGA. Now, farm-terracing is done in other neighbouring villages in the district. Around 25 farm-terracing structures (on 15 acres) are either completed or ongoing in nearby villages in five panchayats.

The outbreak of Covid-19 has impacted the plan. Nevertheless, the villagers are hopeful that through terracing, the problem of soil erosion could be addressed and soil fertility would increase in the longer run. With more cultivable land, vegetables and cereals can be grown leading to food sufficiency, nutrition and a more stable income.