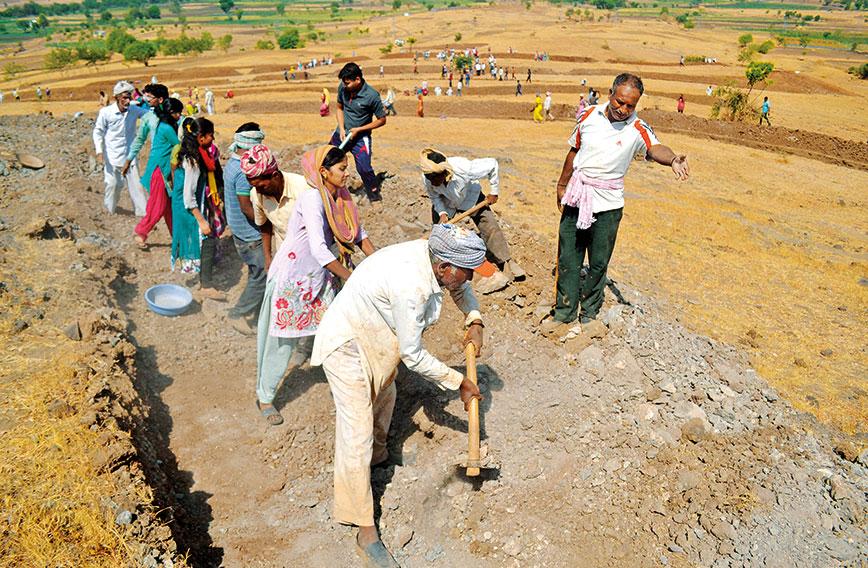 The Mahatma Gandhi National Rural Employment Guarantee Act (MGNREGA) is failing to deliver its promises to the rural poor due to two important reasons. First, because of fraud by state governments, and second, because of the National Electronic Funds Management System (NeFMS) introduced by the central government in 2017. NeFMS transfers wages directly into the bank accounts of workers. The workers have been given no scope to challenge violations of their rights either by the state or the centre.

Young India Project (YIP), an NGO which has been working for 36 years with the rural labour of Andhra Pradesh, adopted a rights-based approach to enable labour to take up the struggle against poverty. We organised unions of rural agricultural labourers to take up land struggles, fight against bonded labour, get homes registered in the names of women, get the SC/ST Atrocities Act implemented and more. In 1986, our unions started a movement to demand legislation for the right to work of rural labour.

Our experiences convinced us that unless rural labour is informed, organised and enabled at gram panchayat level by NGOs, they cannot benefit from the rights given to them. This is because rural labour is the most divided and socially the most vulnerable section of our society and this is why they have no confidence in themselves. Therefore, they need the support of civil society organisations to enable them to benefit from rights and programmes. When MGNREGA was finally passed in 2005, we knew that unless MGNREGA workers were informed and organised at panchayat level, the scheme would fail.

In April 2006, MGNREGA was inaugurated in Anantapur district of Andhra Pradesh and in September that year we were asked to undertake the very first social audit of MGNREGA in 40 mandals of the district. Our field visits identified two major fault lines: minor and major frauds committed by officials and politicians, and that none of the rural poor knew what rights had been given to them and how to demand those rights.

Based on our report, the government of Andhra Pradesh decided that for the time being the state government would take care of fraud. Social auditing was made compulsory in every mandal every six months.

At the end of 2007, the state government held a meeting with YIP and requested us to form MGNREGA unions in the 21 mandals we had unionised. The government gave us funds for two years to train the wage seekers on the rights and entitlements granted in the Act.

On September 22, 2009, the principal secretary met 600 of our MGNREGA union members in Anantapur and decided to adopt YIP’s method of work. The subsequent principal secretary passed a Government Order and created APNA (Andhra Pradesh NGO Alliance), a government-NGO partnership in which the NGOs were given the responsibility of giving rights training and organising Gram Panchayat Samakhyas (GPSs) of MGNREGA workers in every panchayat. And the GPS became a local worker's force which could demand and protect their rights.

By 2014, APNA was covering 425 mandals out of 625 in the state. There was less fraud, and if it did happen, the GPS organised protests. Andhra Pradesh was judged the best MGNREGA state in the country.

In October 2016, NIRD (National Institute of Rural Development and Panchayati Raj) conducted an evaluation of APNA and considered it a pioneering effort by Andhra Pradesh. The NIRD was critical about the performance of a few NGOs in the mandals. It strongly recommended that the APNA model be revamped for better results and also be vested with the authority to monitor the implementation of Acts and welfare programmes in the state.

This is the way MGNREGA should have been implemented by all the states, by creating a partnership between NGOs and the government. But state governments will not allow the creation of organisations of workers in each panchayat because then they cannot commit fraud with MGNREGA funds.

In 2016, even Andhra Pradesh decided to terminate APNA in spite of the NIRD’s positive evaluation report.

On October 6, 2017, the Deccan Chronicle published an article stating that the centre was investigating misappropriation of Rs 146 crore of MGNREGA funds. This was exactly a year after Andhra Pradesh discontinued APNA. Funds intended for rural labour can easily be abused because the workers can’t expose the fraud.

Why did the centre not insist that if the states create organisations of workers in each village strong enough to protect their rights then the centre would transfer funds through the states? Instead, the centre decided to transfer wages of MGNREGA workers directly into their accounts through NeFMS.

But the rights given by MGNREGA involve more than just transfer of wages. The Act gives eight rights and four entitlements. If any of them is not honoured, then who should the workers hold accountable?  NeFMS claims to transfer wages twice a month. But if that does not happen, from whom should the workers demand their wages? These are not abstract questions.

We now present the data generated by our four-month study conducted from December 2018 to March 31, 2019. This study was conducted in six mandals of Anantapur, a drought-prone district. Our study revealed that in Roddam (SC Colony), Madakshira (Bullasamudram), Penukonda (Guntur), Penukonda (Settipalli), Somandepalli (Pandiparthi), Gorantla (Mallipalli), Gorantla (Narsimpalli), and ODC (Venkatapuram), job card holders either received no work, or those who did get work have payments pending. In Madakshira, payments were pending since 2016-17.

We discussed this problem with the bureaucracy from village to state level. They were clueless. When the centre transfers wages directly into the workers’ accounts, bypassing local officials, they cannot help. We have been writing to the Commissioner of Rural Development (CRD), who is head of MGNREGA in Andhra Pradesh. His Joint CRD, in his reply, said that since the centre is transferring wages directly into the accounts, the state government has no control over the matter. He said the centre had cleared wages only up to December 6, 2018, which means already another four months of wages are yet to be transferred.

The workers don’t know what to do. They are losing wages by refusing to work unless their back wages are cleared. If this continues workers will lose confidence in MGNREGA and withdraw, as 500 families have done in Bullasamudram Gram Panchayat of Madaksira mandal. They are SC families and they have lost faith in MGNREGA. This will happen to more and more MGNREGA workers. It is sad, for we struggled for 20 years to get the right to work legislated.

MGNREGA workers are not commodities to be handled electronically. They are human beings who have been given rights. We must enable them to exercise those rights. The introduction of NeFMS has created more problems. If no corrective action is taken by the centre, MGNREGA will fail and the centre and the states will be held responsible.

(With inputs from Ganesh Iyer and Manisha Krishnapurkar)