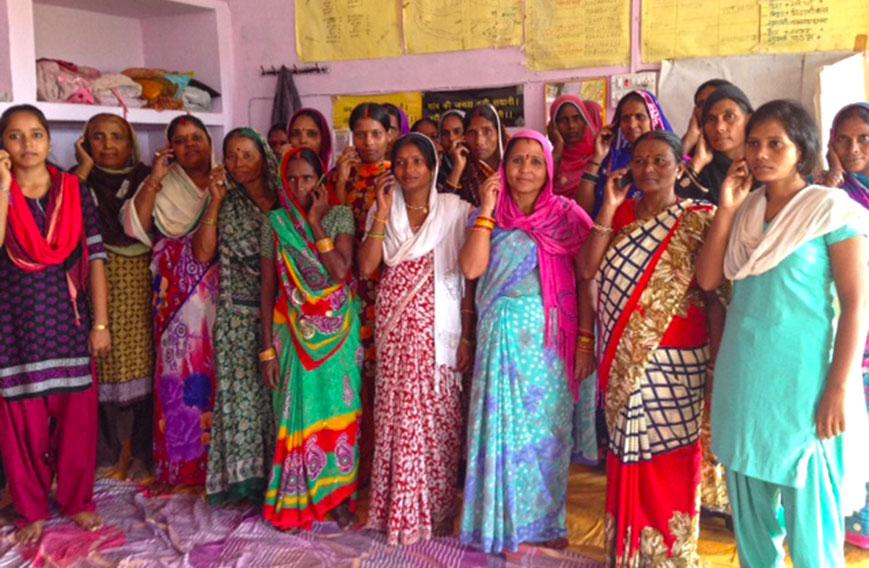 Village women get a helpline

It was a hot and humid August afternoon so Babita decided to take a short-cut to Sirsia Mishra, a neighbouring village in Gorakhpur division of Uttar Pradesh. She walked down a narrow pathway between two lush green paddy fields. Just as she was wondering why the fields, usually dotted with farmers, were so deserted, she was accosted by a man. Although Babita was taken aback by his sudden appearance, she wasn’t afraid. After all, as a community volunteer with the Rajiv Gandhi Mahila Vikas Pariyojna (RGMVP), a non-profit in UP working to empower women and alleviate poverty, she had traversed this path many times to visit the village to organise meetings with women. But when the man started making lewd remarks and harassing her, Babita knew it would be risky to deal with him alone.

Instead of panicking, she quickly dialled Helpline, a special number designated for emergencies by the RGMVP self-help groups (SHG), saved on her mobile phone. Within minutes, five women, all SHG members, reached the spot. When the man saw them approaching, he fled.

With nearly 11.4 percent of crime against women in India being committed in UP, the state ranks a dubious first on the national list, according to the 2014 National Crime Records Bureau. In fact, in 2013-14, UP, which has a 16.8 percent share of the country’s female population, saw an increase of 73 percent over the previous year of cases of assault on women with intent to outrage modesty.

But rural women’s collectives in the villages of Deoria district in Gorakhpur division are combatting this with an innovative idea. They have developed their own helpline so that it can be used by all the SHG members in moments of dire need and to protect themselves and others from sexual harassment and domestic violence. The 240 SHGs, each with a membership of 10-15 marginalised women, know that a chain of support is in place the moment they dial the Helpline.

“Since we formed SHGs with the help of RGMVP and understood the importance of collective strength, we have gained the confidence to tackle sensitive cases of sexual harassment and domestic violence. The decision to create a helpline came up during our meetings when we discussed how members could access help in an organised manner. Now they all know that instead of becoming distressed or frightened, they can get the support of the collective with one phone call. Just this knowledge gives them the confidence to fight for their rights,” said Rita Devi, president of the Bhatparani block cluster of 240 SHGs.

This growing self-belief has led them to take on the police and perpetrators from the higher castes in their bid for justice. In Babita’s case, the women marched into the village and tracked down the culprit. Even on finding that he was from an upper caste, they were not cowed down and demanded an apology. By this time, thanks to the Helpline, the news had reached all members. Over 100 women arrived to lend support and sat in solidarity outside the house of the culprit. Several hours later, when he tried to sneak out disguised as a godman, a vigilant Babita and Rita nabbed him. They called the local police and ensured he was arrested and put behind bars by following him to the police station.

But the drama didn’t end there. Strings were pulled by the family and the pradhan was called to use his clout to free him. To build pressure on the women to give up, pradhans from adjoining gram panchayats were also called. But the women didn’t buckle under this pressure. They knew that if they did so, others would also become emboldened to misbehave under the influence of alcohol. Finally, when everyone realised that the women were not going to give up, an official letter signed by four pradhans stating it was now their responsibility to ensure such an incident would not be repeated was given to the women. Only then did the women call a truce.

“This was a huge victory for us. Now everyone is aware that we will not tolerate any harassment and we can fight to bring the culprits to book,” said Babita.

It was the Helpline which came to the aid of Kamlawati, an SHG member in Narainpur Tiwari village. When members rushed to her house following her call, they found that Kamlawati was abused and beaten by her husband whenever he consumed alcohol. But this time, he had gone too far and they had to hospitalise the battered Kamlawati.

A larger meeting of the SHGs was called and a decision was taken not just to counsel the husband but also to ensure the closure of the alcohol shop. This collective effort paid dividends. “My husband has not raised his hand since then,” said Kamlawati.

The Helpline has also been used to save women outside the groups from the clutches of moneylenders. Tears run down the face of Kamala Devi of Mandanchak village even today when she remembers her ordeal. When she was unable to pay the loan instalment, the moneylender ordered her to carry out a humiliating task with cow dung at his house. When her neighbour, an SHG member, heard about it, she called the Helpline even though Kamala was not part of the collective. “An immediate decision to lend the amount needed was taken by the group and my dignity was restored,” recounted Kamala. Now an SHG member, she has freed herself of debt.  n