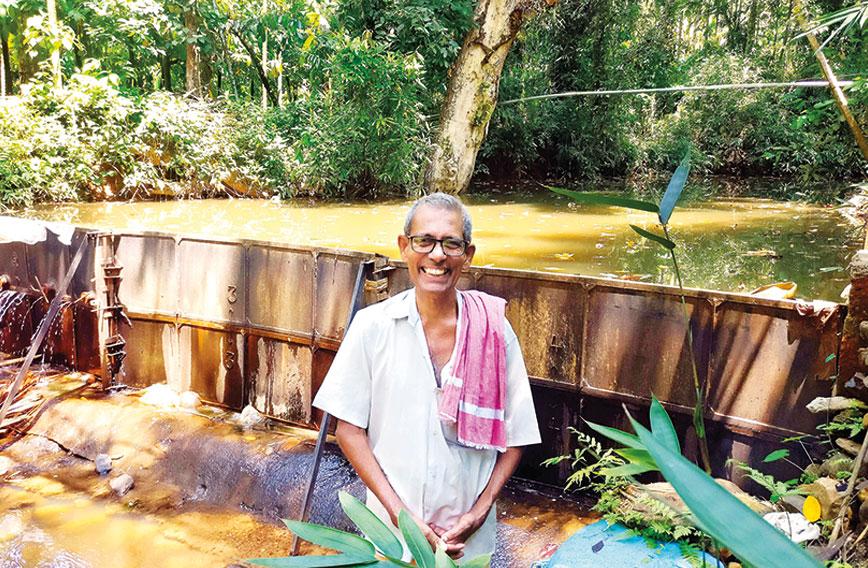 EVERY year A.P. Sadashiva Marike, a middle-class areca nut farmer near Puttur in Karnataka, would construct a katta across a stream that flowed past his gardens. The katta was dutifully made, at considerable expense, without fail every December since his late father’s days.

The katta is a temporary check dam built with local materials like compacted soil, areca nut wood and branches of trees. To build one requires substantial skill. The katta checks the flow of water in the stream and stocks a huge amount by artificially raising water levels upstream.

The benefits of the katta are manifold. Unlike bore wells which devastate groundwater levels, the katta raises water tables. Marike’s earthen tanks fill up and the sub-soil moisture in his gardens increases, thanks to his katta. If he builds a series of kattas across the stream, the water flow will last for one or two months.

The problem is that the katta, though laborious to build, lasts just a season. Fresh soil, brought from nearby areas for its construction, gets washed away in the monsoon. “In the site from where we brought soil year after year, a large hole was created the size of a usual house site,” recalls Marike.

Generally, it requires 60 mandays to construct the traditional katta. Though these kattas are fairly stable, they can’t withstand floods caused by untimely rains. This means Marike has to reconstruct the katta — at much expense.

High labour costs, a shortage of skilled labour, the crab menace and anxiety that the traditional katta might be breached in surprise showers has made farmers look for low-cost and more durable check dams. A number of check dams has now been designed, some by farmers themselves.

Faced with the unreliability of his katta, Marike began to consider how he could reduce his cost of construction and build a more stable check dam that wouldn’t collapse during a flash flood.

A decade ago, he had opted for a check dam built with sand bags. It saved him labour. He built it with just 10 workers. Though the sand bag check dam was an efficient option, Marike sought an even more sustainable model. Wracking his brains, the idea of using mild steel sheets struck him.

He had been to Puttur city and seen mild steel sheets used for making slabs during construction. “That attracted my attention. Why not use this for my check dam, I thought,” he says.

To do so he had to reinvent the way the katta was constructed. A good concrete foundation has to be laid in summer. Marike’s stream is 23 feet wide. A ‘C channel’ is fitted to support the mild steel shutters. A series of shutters made with 150 mm mild steel is placed in front of this, side by side. To withstand the hydraulic pressure, the shutters are placed in a slightly slanting position. A silpaulin (waterproof) sheet covers all these shutters from inside.

The biggest advantage of this type of check dam is that it can easily be constructed or dismantled. Two people can do it in two hours. Secondly, there is no recurring expenditure.

Marike applies mud oil after the shutters are dismantled and taken home every summer. This prevents rusting. The entire check dam, including the concrete foundation, cost him `20,000 in 2013. Eight years later, it is still in good condition.

The trend in Puttur and its surrounding areas encompasses sustainable semi-permanent check dams that can be constructed in half a day.

Jogibettu Govinda Bhat, a farmer in adjoining Sullia taluk, was also interested in a semi-permanent check dam. Along with six partners, he was constructing a traditional katta nearby. The others lost interest. Bhat found himself building his sand bag katta alone. Only a few labourers were willing to lift heavy sand bags. 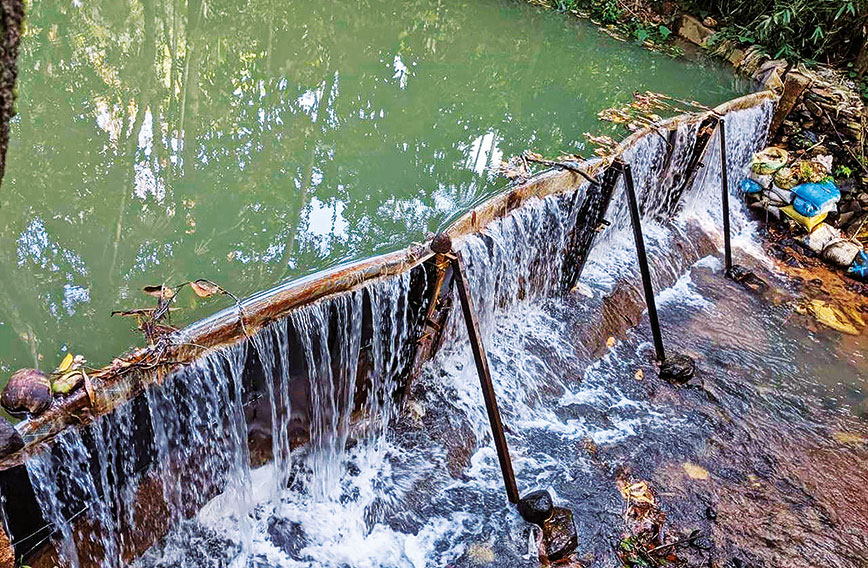 The check dams are stable and can withstand surprise showers

Bhat approached Pathanjali Bharadwaj, owner of Bharath Grama Sampark Nirman, a fabrication company in Sullia. Bharadwaj, an M.Tech from the National Institute of Technology, Karnataka in Suratkal, designed a  mild steel sheet check dam for Bhat which is bigger and slightly different in design and dimension from Marike’s. This is the second year it is being rigged up.

Bharadwaj’s design is unique. The distance between the banks is 32 feet. The check dam has eight shutters, each eight feet in length. There are no concrete pillars in between. Instead, detachable iron pillars are used. Holes are made in the concrete foundation into which these pillars are inserted when the dam is made in December.

While setting up the dam, two shutters 2.5 feet in height are fixed between these iron pillars. Each shutter is convex in shape to withstand hydraulic pressure. Water gets stored to a height of five feet up till 300 metres upstream. One of the central shutters has four pipes and a cap to drain the stored water whenever necessary.

“When we were constructing the traditional check dam with compacted soil and wooden branches, we required 35 to 40 man days. Our wage bill came to a minimum of Rs 20,000. After we shifted to building sand bag check dams, our cost of labour reduced to Rs 5,000 for 10 workers. Today, two labourers can easily erect or dismantle our check dam in half a day,” explains a happy Bhat. The entire structure cost him Rs 1,75,000. He hopes it will last 10 to 15 years.

Bhat’s cousin, Udayakumar Mogape, also a farmer, is impressed with Bharadwaj’s  dam. His family has been constructing the traditional katta for decades. Mogape’s katta has some unique features. It has traditional pillars, locally called gurji, which provide strong support to his katta from behind.

“Yet, sometimes my katta gets breached during the irrigation season because of unexpected floods upstream. My cousin’s check dam is more stable and won’t collapse so easily,” he remarks.

Mogape has already placed an order with Bharadwaj for a mild steel sheet check dam. Next summer he will construct a concrete foundation and build the new check dam, eight feet by 26 feet, at an overall cost of Rs 2 lakh.

“We can manufacture mild steel sheet check dams upto a span of 30 to 40 feet. As the width of the check dam increases, its stability reduces,” explains Bharadwaj. “The foundation has to be carefully constructed before summer ends. We can erect such check dams even if the flow of water in the stream is a trickle. We can design this model upto 10 to 12 feet and manage the shuttering process manually. If the dam is higher we can provide two layers of shutters. Manual shuttering with shutters more than 12 feet is risky.”

The  Kasaragod Development Package (KDP) is a special development programme for the district by the state government. A KDP team consisting of engineers from the Minor Irrigation Department and officers of the Soil Conservation Department visited Marike’s check dam in January last year. After studying it carefully they  approved three innovative check dam designs for mass implementation in the district. Marike’s is one of them.

E.P. Rajamohan, head of KDP, was very impressed by Marike’s check dam. He got one built for the KDP last year. Fabricated at a local workshop, it cost Rs 25,000.

Earlier, the zilla panchayat (district council) of Dakshina Kannada, Marike’s home district, had sent a team hoping to disseminate this design with some fine-tuning. News and videos were circulated widely. But the idea was unceremoniously dropped. The panchayat cited lack of funds.

Due to the unstable nature of kattas and the high costs incurred, semi-permanent check dams are likely to rise in popularity. “There are challenges, though,” says Sajangadde Shrihari Bhat, president of the Neera Nemmadige Padre, a water conservation movement in Padre village in neighbouring Kasaragod district. “A single design can’t suit diverse situations. The type of check dam to be built will be dictated by the stream span, its quantity of water, type of riverbed, the status of its side walls and so on. So, we require different models to suit different streams.”

The Neera Nemmadige Padre held a ‘Katta Utsava’ (Katta Festival) in 2020. It was KDP that picked up the idea. It plans to hold a check dam festival every two years to create awareness and encourage the building of check dams.