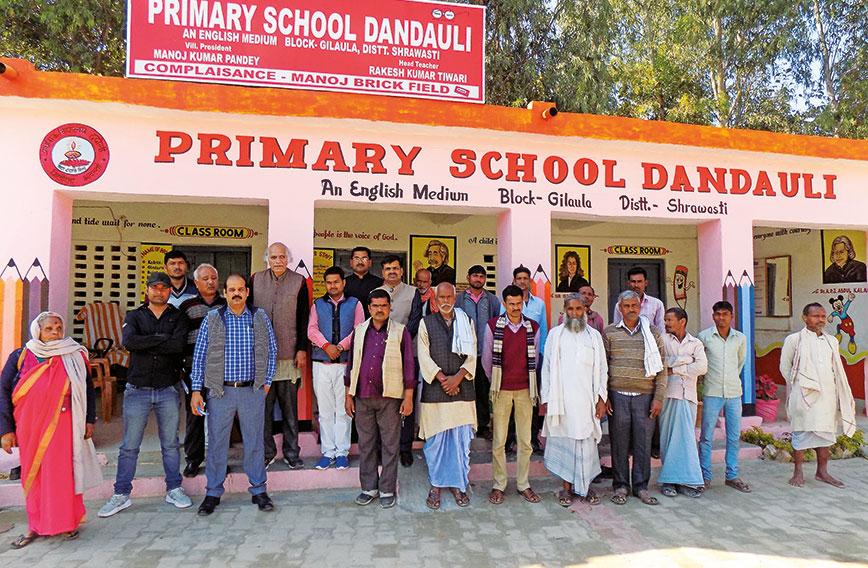 Residents and officials outside a newly renovated school

Shravasti is improving sanitation in schools

Shravasti district is located in the eastern Terai belt of Uttar Pradesh, below the Nepal Himalayas. It has generally been known for very low human development indicators. But in recent years, officials with the support of voluntary organisations are overcoming this tag by achieving good results on sanitation.

Bairagijot is a village where initially there was a lot of resistance to toilets. Anju Chaturvedi, a member of the district-level resource centre for sanitation, says that she faced a lot of opposition from some villagers during her earlier visits. But they persisted and were able to spread some essential messages about the dire impacts of open defecation on human health, and the resistance began to recede. Today this village is mentioned as a place where the progress towards eliminating open defecation is satisfactory.

In Dindauli village, progress was relatively easier because of the support of the pradhan, Manoj Pandey. He says, and other villagers agree, that about 80 to 90 percent of households have been able to construct toilets while others will complete theirs soon. As villagers have shifted towards using toilets, Hamid Ali, a local resident, says the incidence of diarrhea and vomiting has reduced. Krishna Kumari, an elderly lady who looks after an ICDS centre, says this has been a big blessing for women whose security and comfort levels have increased greatly.

Krishna Kumari adds proudly that she made an important contribution to the sanitation campaign with her songs and slogans. And she immediately breaks into song.

The same enthusiastic response towards improving sanitation can be seen in school. The headmaster of Dindauli school, Rakesh Tiwari, points out the many improvements being made in the school, which is an integrated campus that includes primary and middle school classes and an ICDS centre. A playground has been recently set up in a neglected area, classrooms are being painted brightly and now have learning materials, and adequate toilets have been provided. The panchayat has made funds available and takes a keen interest in improving the school, says Tiwari.

The upgrade in another school in Pandeypur village in Jharkusha block is even more impressive. The toilet block and water stations have been better built. A child-friendly toilet has been made separately for smaller children from Class I and Class II. The brightly painted walls not only help to create a cheerful environment but also have important educational content for children of various ages. Students here are well-informed about sanitation messages such as hand-washing. The head teacher, Anurag Pandey, is proud of his achievement and keen to listen to new ideas.

A key role in scaling up sanitation efforts in innovative ways has been played by the district coordinator of the Swachh Bharat Mission, Dr Rajkumar Tripathi. He is deeply committed to sanitation efforts, works hard and is keen to try out new ideas. Unlike some officials, he is willing to concede the shortcomings that exist, and enlist the support of those who can help resolve problems.

One problem is that contamination of water can occur in areas where the water table is very high, and so adequate care has to be taken, by using suitable technology and careful monitoring, to ensure that the rush to build toilets in these areas does not lead to new problems.

Improving training can help too. The Aga Khan Foundation (AKF), supported by UNICEF, has played an important role in training panchayat pradhans, their secretaries and members of sanitation resource training centres on important issues related to sanitation, water and hygiene.

Manoj Soni, a grassroots worker of the AKF, has been a part of the success story of villages like Dindauli. He says, “The CLTS helps us to make the sanitation effort a community effort. In addition, we monitor the situation carefully so that shortcomings can be identified and tackled at the right time.”

Jairam Pathak is the overall coordinator of the AKF effort and has played an important role. He has used his IT skills to design a framework in which any shortcomings of rural toilets, village sanitation committees, and sanitation in schools, the ICDS and health centres can be identified using a set of indicators.

District officials like Tripathi are appreciative of this help as it enables them to get a very realistic picture of the changes spread over a large number of villages on a continuing basis and this can be an important tool for making improvements.

The efforts in Shravasti are showing results precisely because there is room for learning from one another and pooling energy and resources for achieving good results. The success of villages like Dindauli owes a lot to the coordinated efforts of the administration, the panchayat, village committees, and voluntary organisations.

At the same time, some serious problems remain. For example, government schools in villages do not have a sanitation employee. The panchayat sanitation employee or safai karmi is already overloaded with work and cannot attend to the additional responsibility of schools properly.

Another problem is that kitchens where mid-day meals are cooked do not meet the required norms of hygiene. The women cooks who have the onerous responsibility of feeding a large number of children are paid as little as Rs 1,000 per month (Rs 33 per day). These problems need to be resolved soon.