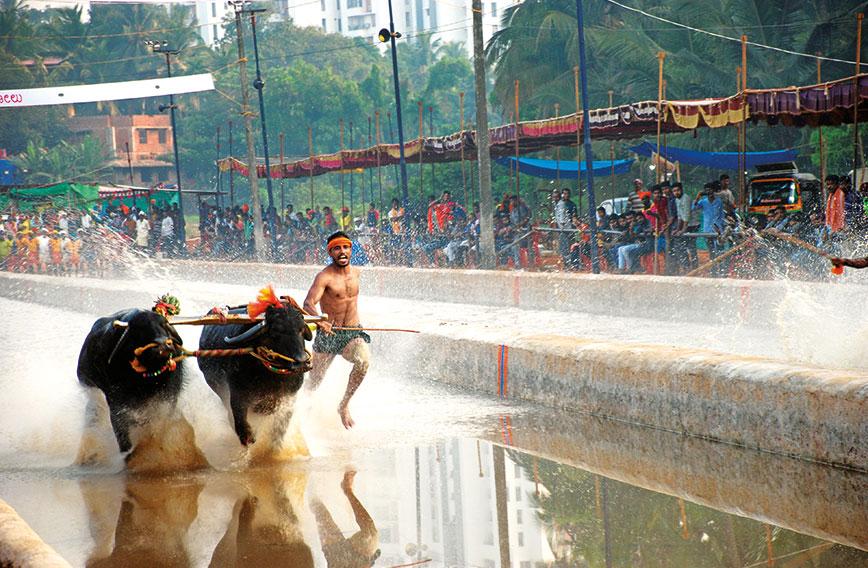 Buffaloes and their jockey race through a slushy track

Kambala gets kinder and more popular

BLARING microphones, blowing horns and the beat of drums heralded the much-awaited Kambala, an annual sporting event in which buffaloes race down a slushy track to the frenzied cheers and chants of spectators.  A  traditional sport, the event took place at the  Goldfinch grounds in Mangaluru this year.

During the racing event, the arena is taken over by a huge, hectic country fair, marked by colour and gaiety. From being a marketing hub for agricultural implements used to spur buffaloes while ploughing, the venue now attracts elaborate stalls peddling everything from toys to food. The air is filled with the chatter of thousands of villagers who congregate here to witness the buffaloes racing to an earthy victory. Men huddle in groups and comment on the animals and the skills of their rider.

Every winter the southern part of coastal Karnataka comes alive with people who gather there to witness Kambala. If you are there during this time, partake in the celebrations and get swept away by the excitement of the races when a strong-muscled farmer surfs his way down the track behind the beasts while balancing precariously on a trailing wooden plank. The prize goes to the swiftest in these races.

Normally, Kambala is held on muddy tracks adjoining a rice field. The 135-metre-long track is prepared by curing with water and made slushy. The jodukare or the twin-racing tracks are considered popular. Water is pumped into the tracks throughout the event to ensure constant flow of fresh water. Toranas or cloth banners are strung across the track at a height of five metres.

The genesis of Kambala can be traced to the fourth century, when the present Tulu region was ruled by members of the Alupa dynasty, who were feudal chieftains called arasus or kings. What began as a royal pastime (arasukambla) metamorphosed into a rich man’s sport with affluent landlords hosting it on specially laid tracks on fields set aside by them for this purpose. They reared the best animals and took pride in winning trophies during the annual racing competitions. Even today, a person who owns Kambala buffaloes enjoys special status in rural society. But this rural sport gained popularity in the early part of the 20th century, when farmers would race their buffaloes home after a day in the fields.

Preparations for the mega event start months in advance. Utmost care is taken to choose the best animals and the selected ones are made to go through rigorous training under a team of specialized jockeys. The valuable buffaloes are pampered and prepared like thoroughbreds. The bovines are fed a nutritious diet of pulses soaked overnight in water, peanuts ground to a paste, chickpeas, coconut mix and rice, given regular massages and hot water baths daily. To make their muscles strong and flexible, they are taught to sit, stand, crouch, bend legs during the training before they are taken to makeshift racing tracks for practice. Some owners even provide a swimming pool for the bovines to wallow in during the heat. Racing buffaloes in training are rarely put to work in the fields.

Decked in colourful ropes covered with tinsel, and with headpieces of silver and brass, the buffaloes are paraded before the gathering to the sound of a brass band and drums. Then two pairs of buffaloes and their jockeys trot up to the starting point on the slushy track and the bovines are spurred into action. The Kambala races have different versions. In one, the man runs alongside the buffalo; in another, he rides on a wooden plough-board attached to a pair of bullocks, literally surfing his way down the track behind the beasts. In another version, a specially designed wooden block is used which lifts and sprinkles the water as it runs.

Dressed in a short lungi and a coloured turban, the barechested rider mounts the wooden plank attached behind a pair of animals while the trainers hold the buffaloes, waiting for the green signal. With the driver’s prodding, the huge animals surge forward and begin to gallop. The race gathers momentum as they speed towards the finishing point, spraying and splashing mud in the air. The frenzied crowd cheers the participant who causes the biggest splash that touches the torana. The riders display their prowess in manoeuvring the plank to produce the tallest and widest splash of muddy water. The performances of the buffaloes are judged on the basis of pace, style, speed and the height and breadth of the water splash created while racing.

Earlier, the prize for winners was a bunch of coconuts and bananas. Today, expensive gold souvenirs are given away to the owners and riders of the winning animals. But it can hardly match the prestige of those who rear and race buffaloes. Modern racing, while retaining some trappings of religion and culture associated with traditional races, has an element of entertainment. While traditional racing was strictly guided by an auspicious day and time decided by a temple priest and was limited to three hours on the designated day, the modern races stretch up to two days, often including both day and night racing with flood lights. A heartening factor is that Kambala is no longer a ‘cruel’ sport as the animals are not goaded to a harsh extent anymore — thanks to the efforts of animal rights activists.

Season: From November to April-end