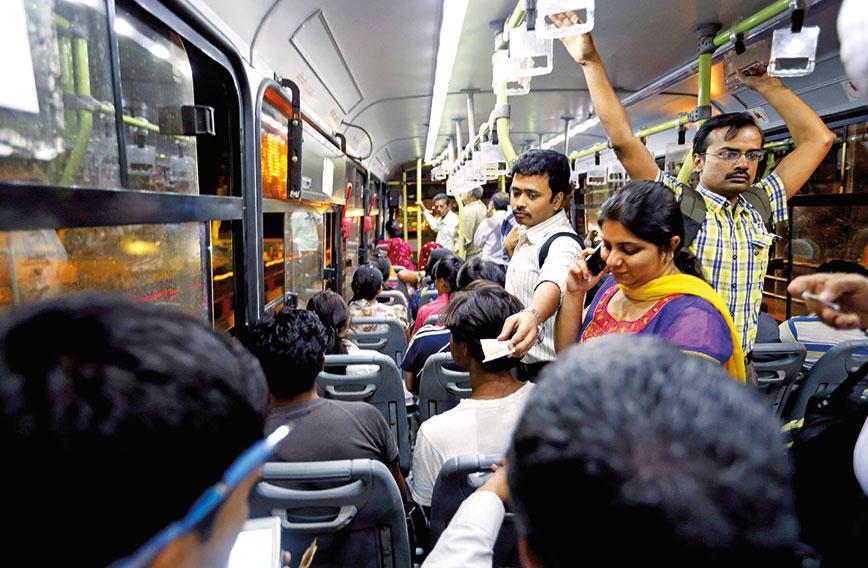 CRUCIAL meeting to get to, and stuck in a traffic jam? That is when you realize how much mobility matters. If in a non-airconditioned bus or in an autorickshaw, the smell of noxious exhaust fumes reinforces the menacing message of the pollution havoc wrought by motorized vehicles in our cities. Despite the compulsory use of CNG by public vehicles in Delhi, pollution is still at dangerous, health-affecting levels. In many other cities, it is possibly greater, made worse by the adulteration of fuel with cheaper kerosene.

Poor traffic management, driver indiscipline, and lack of enforcement contribute to jams, in addition to the sheer volume of traffic. A further problem is improper road engineering, ensuring flooding—often in the very same places — with the slightest rainfall. One has not seen a good study quantifying the massive monetary impact of person-hours lost, fuel wasted, and pollution resulting from idling engines in slow or immobile traffic. There is also the human cost of interviews missed, of ambulances delayed, of mental and physical strain.

The technocratic solution is more fly-overs (or tunnels) and broader roads. The first, unless very carefully planned, only shifts the point of congestion; the second has increasingly taken away all pedestrian space in most cities. Further, after these steps to smoothen flow, the inevitable accidents lead to the addition of speed breakers. The outcome: no time saving, but huge additional expenditure! On expressways, the potential time saved is more than offset by the choking at each toll point.

In light of these issues, what will be the future mobility solutions? With growth and prosperity, are we doomed to face ever greater challenges, especially in cities, as we have seen in the past few decades? There is now hope, from several fronts, that it need not be so.

First, after very many years, there is a resurgence of interest in mass rapid mobility through public transport. Sadly, convenient and cheap bus systems are dying in most cities (Delhi has fewer buses than it did 10 years ago). Lack of funding has meant few new buses, old ones prone to frequent breakdowns, and a downward spiral in quality, reliability and viability. In cities with a “local” train system, this has resulted in a huge additional load on them. Some cities are now getting new buses, but the numbers are abysmally low. The focus has shifted to fashionable, glitzy “metro” train systems. To the extent that these provide quick intra-city mass transport, they are welcome. However, they are limited, expensive and generally unviable even with high fares. They are not quite a substitute for the convenience or low cost of buses, even though they are far more comfortable.

Public mass mobility in cities also needs an efficient bus system, upgradation of “local” trains, and fast trains from nearby suburbs (like the planned Regional Rail Transport System in the National Capital Region). But, to be effective, the rail systems require inexpensive last-mile connectivity and sufficient parking space for vehicles, including bicycles. Since space in cities will always be at a premium, underground and multi-storeyed parking are essential. More important, good footpaths will facilitate walking from station to home or workplace, reducing the requirement of parking space, cutting vehicular pollution, and saving money for commuters while improving their health.

For a variety of reasons, the need for individualized or small-group transport will continue. One can already see this moving to electric vehicles (EV), which will — in just a few years — dominate the motorized two- and three-wheeler market. Many battery-replacement stations and faster charging will give a boost to EVs. The phasing out of the internal combustion engine, using polluting fossil fuels, is clearly on the horizon.

Hydrogen as a fuel for cars is some years away, but one can already foresee its use for trains and trucks in a decade or less. Shipping may also move to hydrogen. The skies too may see a new version of the hydrogen airships of old, especially for goods transportation. Hopefully, whether powered by electricity or hydrogen, freight trains will become the preponderant means of goods shipment, rather than the inherently less efficient road transportation. Meanwhile, much of inter-city transport may move from air and road to
rail, thanks to high-speed railway. For this, too, the last-mile connectivity (as also a more positive station experience)
is important.

Drones have already been tested for commercial use, both in-city as well as to farther and remote areas. Your orders for biryani or books, as also medicines for your relatives in a village, will soon be delivered by drones. In a few years we could also see the launch of “drone taxis” and, substituting “cars in every garage”, there may be drones on every roof-top.

We had noted some of these advances in an earlier column (Civil Society, April 2022). Yet, as always, these technological solutions will work only in the context of the right societal context. This requires total-system thinking, with people at the centre. The transition to a more sustainable city lies in better town planning. For example, housing within walking distance of workplaces; priority to pedestrians, not motorized transport; broad, comfortable footpaths; covered walkways and road crossings for pedestrians; multi-storeyed buildings at Metro/rail stations for offices and high-footfall places; dedicated, non-encroached bicycle tracks; adequate numbers of parks, gardens and playing fields.

These and other regulatory or policy measures — e.g., levies that encourage hiring and sharing (pay-per-use, or mobility as a service), rather than ownership of cars — would take us to a less stressful and polluting future: a sustainable one in which mobility matters, not menaces.