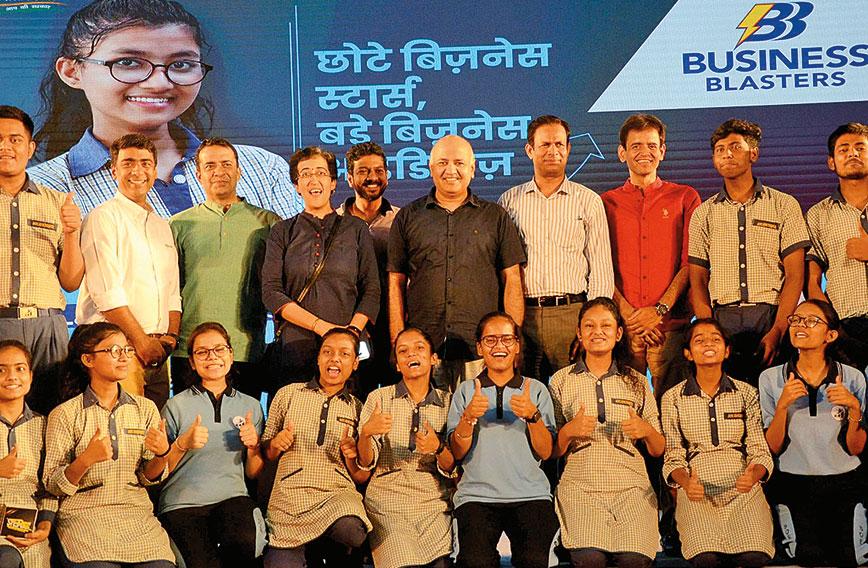 The AAP government in Delhi encourages students to become entrepreneurs

DEMOGRAPHY has, for some years now, been recognized as a driver of various key parameters of a nation. A country with rapid population growth, for example, could benefit for many years from a “demographic dividend”. This is because the ratio of working age people to dependants (the non-working age groups) begins to increase and can trigger faster economic growth. China and other East Asian countries experienced this; now, India too is very well-placed in this regard. Of course, deriving the full benefit requires that workers have the necessary education and skills: something that we need to ensure.

A large youth population can also be a source of entrepreneurship and innovation, as the young are known to be less risk-averse and more likely to break new ground. Therefore, in the tech era, when start-up enterprises are a catalyst for economic growth and jobs, having so many youngsters is a huge advantage: one more demographic dividend. In India, we are already seeing the fruits of this through the upsurge in start-ups and the success of so many innovative ideas.

Looking ahead, though, there are other aspects of demography that we need to be aware of and to plan for. The latest data (from the fifth round of the National Family Health Survey, NFHS-5), collected over 2019-21, shows that the country has reached a total fertility rate (TFR) of 2.0, just below the replacement level of 2.1. In simple terms, the implication is that we are now headed towards zero growth. However, past momentum means that the total population will continue to grow for some years yet, and we might stabilize only at about 1.6 billion, overtaking China in the next two years to become the most populous country. Thereafter, with lower TFR, the population will begin to decrease and is estimated to reduce to one billion by 2100. So, the many who worry about the problems of an ever-growing population can sleep easier.

Worries about a burgeoning population may be greatly allayed by the figures from NFHS-5, but in the short to medium term — as the population continues to grow — there is a need to focus on livelihoods and job creation, healthcare, education, skilling, and infrastructure. A more granular look at the data reveals that while some states have had a low TFR for some years, in a few others it is still high. For example, while all but five states have a below-replacement-level TFR, the figures for Uttar Pradesh and Bihar are yet as high as 2.35 and 3, respectively. Given that these are populous states with an already-large base, high growth there translates into huge absolute numbers. These states are continuing to add many millions to their population each year, and the number of job-seekers is exploding. Already, the lack of livelihoods in most of the eastern states has led to large-scale labour migration — first to farms in Punjab, and now to urban job hubs (Delhi/NCR, Mumbai, Bengaluru, etc.), as also to other areas, including distant Kerala (special trains from Kerala to Assam are but one indicator). Figures apart, further visual evidence of this was seen in very tragic scenes of return migration in the early days of the pandemic.

Juxtapose the demographic data of population growth with economic data and one foresees a growing problem. Data for a 25-year period shows that in 2018-19, the relative per capita income (per capita state GSDP as percentage of the national average) was a dismal 32 percent in Bihar and 53 percent in UP, both being marginally lower than their relative figures for 1993-94.  On the other hand, the figures for Tamil Nadu and Kerala were 153 percent and 162 percent, both being
higher than 25 years ago. Karnataka was as high as 168 percent, from just 88 percent (i.e., below
the national average) in 1993-94. Again, figures apart, on-ground visibility provides the stark contrast between some of the eastern states and the southern ones.

In spite of their efforts, the low base and other problems indicate that the eastern states will continue to lag for many years yet. On the other hand, with continuing robust growth in the more prosperous states, given their better infrastructure and existing industrial-business base, the absolute disparity with the east may well increase. As a result, job opportunities will be far greater in the “advanced” states. At the same time, given the demographic dynamics, the working population in these states will begin to decrease, leading to shortage of workers. As a result, the demand-supply imbalances in both regions will lead to even greater migration from the east.

Large-scale migration, that too on non-seasonal (unlike that related to farm labour) and long-term bases, will change the population composition in many a town and city. This will have deep implications for the socio-cultural arena. Many—especially blue collar and semi-skilled workers—are likely to be males who come alone, leaving the family in the village or town of origin. This has both social and economic impacts. Those living without the anchor of a family are known to be more prone to temptations: alcohol, drugs, and crime being amongst the negative ones. Of equal consequence may be the effect on the home village — especially on families and neighbours — of the migrant worker: as money and experiences flow from the migrants to their homes, they will have both economic and socio-cultural effects. One other impact of large-scale migration will be on the political scene. Indicative of this is the wooing by political parties of “purabiyas” (from east UP and Bihar) in Delhi. On the other hand, there is also an “othering” or demonizing in some cases (e.g., of Biharis by a party in Mumbai).

Whatever one’s perspective, we cannot ignore the impact that future large-scale migration — a result of demography and economics — will have on the social, cultural, economic, and political fabric of the nation.