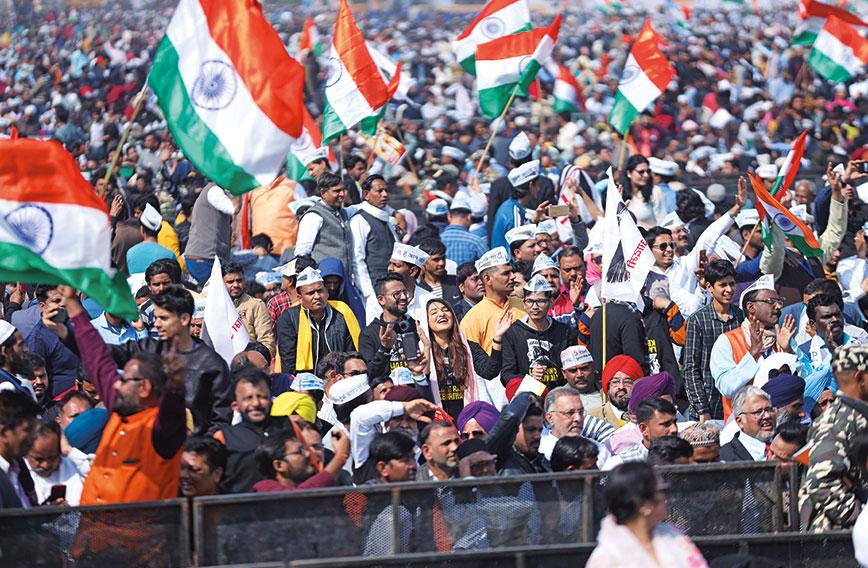 Importance of being AAP and earnest

It was clear to anyone moving around a bit in Delhi before the elections that the Aam Aadmi Party (AAP) would be coming back to office. Much before voting day, people had pretty much decided to give the young party another chance because of better government schools, water and sewage connections, free rides for women in safe buses, cheap electricity and ready availability of healthcare.

The Congress under Sheila Dikshit had also done a lot. But the five years under AAP were seen as being transformational. The changes it had brought had been exciting and palpable. It had promoted equality and access on a scale that didn’t seem to exist earlier.

So it is that in the popular perception government schools have become not just better, but as good as private ones. Surgeries are now possible for the poor at the best hospitals at no cost. Mohalla Clinics offer the reassurance that medical help is at hand. Consumers also no longer feel squeezed by power companies and water supply has improved.

The hallmark of AAP has been its earnestness. It has displayed levels of energy and responsiveness not usually found among Indian politicians in power. This has, of course, primarily served to keep its voters on the hook. But it has also brought into its fold an array of professionals in search of an opportunity to reform public life and make a contribution to better development.

AAP’s big successes have been in Delhi. It has failed to make significant inroads in other states. But its image as a clean and forward-looking party has also come to increasingly resonate with people elsewhere in the country. In the Delhi election AAP was seen as an antidote to the BJP’s communal agenda, hate speeches and muscular governance, which sought to stifle any form of dissent. The AAP victory that followed was closely watched and widely celebrated by growing numbers of people fearful of democracy being in danger.

AAP went to the electorate in Delhi asking to be judged on the basis of its performance over the past five years. It could do so because of a reputation assiduously built to win popular support. At the party level it had determinedly remained in touch with its voters. In government it unleashed a host of freebies and policy innovations to make itself irresistible. 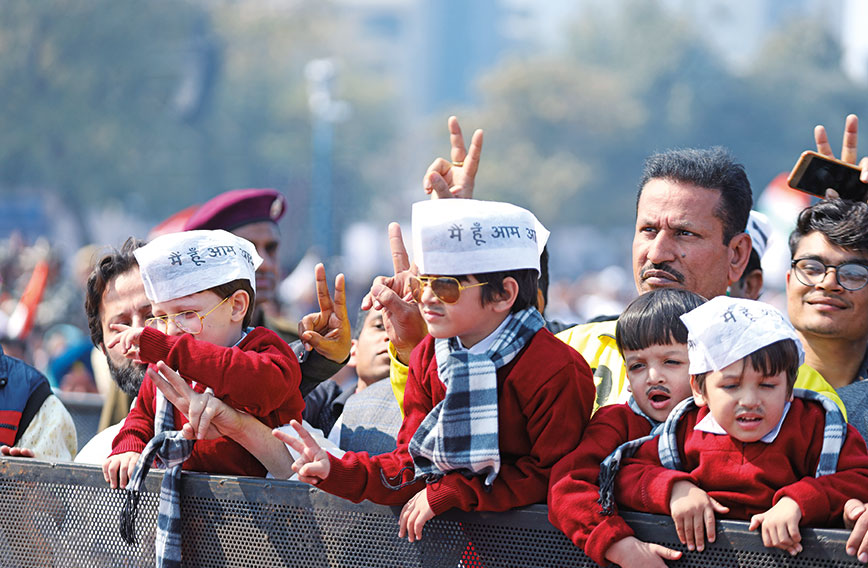 The owner of a cyber café near our office at South Extension in south Delhi tells us the local MLA is always on hand, just a call away. Go to him with a problem and he will solve it.

Similarly, in Greater Kailash, a constituency in which you would expect the BJP to be popular among the upper classes, the MLA from AAP has a serious fan following because he at least listens and is approachable even if he can’t get every problem resolved.

Next door, in Malaviya Nagar, the MLA was dogged by controversies in the early part of his term, but when it came to re-election he was once again the popular choice because he had made himself available to residents right through his term.

In areas like Burari, an extremely poor part of the city in the northwest, it is a big thing when piped water turns up and sewer lines get laid. In slum after slum it is much the same story. Where improvements have not come people believe that they will with AAP around.

Both the middle class and the poor have voted for AAP. But AAP’s appeal is strongest among the poor, who constitute a third of the city. Long denied basic amenities and at the mercy of local mafias, the poor believe AAP is their ticket to empowerment and better standards of living.

As a party, AAP’s great strength has been in being able to combine higher skills and expertise with grassroots politics in ways that make people feel their lives are changing for the better.

An entrepreneurship programme in schools, to reinvent the way the young see employment, has been devised and implemented by professionals who work with AAP in the spirit of serving a larger good.

At Rajokri, in the southwest on the border with Gurugram, a pond, which had become a receptacle for sewage and garbage from nearby homes, has been transformed into a water body and a natural sewage treatment plant. Residents can now sit out at the spot when earlier they would stay away from it.

In east Delhi, a similar initiative is underway. A start-up has been commissioned to innovatively use technology to process sewage flowing from homes into open drains to rid it of heavy metals and other contaminants before putting it back into the ground to recharge aquifers.

Much of AAP’s work in the five years that it has been in power has been imbued with the spirit of activism. Its ideas have been new and refreshing, compelling people to see the difference between the young party and established ones like the BJP.

While the bigger initiatives like free bus rides for women, cheaper power and Mohalla Clinics have made headlines, several other measures which benefit people and show them that the government is working for them have been below the radar of the media and observers. They have paid dividends during the elections.

Parties in power tend to yield to the enticements of office. By all accounts, it hasn’t happened in AAP. Its strength continues to come from its volunteers and their enthusiasm. But certainly its top leaders have become shrewder in their political moves as can be seen in how they tied the BJP up in knots during the recent elections.

When we meet Manish Sisodia in his office, he is in jeans and sneakers. He has none of the accoutrements of being the deputy chief minister. The same is true of Arvind Kejriwal despite the power he wields as chief minister and the enormous celebrity status that is bestowed on him.

Their simple personal styles are a powerful statement of what the party stands for.  Both Sisodia and Kejriwal share a past in social activism. Most famously they were part of a much larger campaign for a right to information law. Then came the anti-corruption movement with Anna Hazare at the helm, which finally launched them in politics. 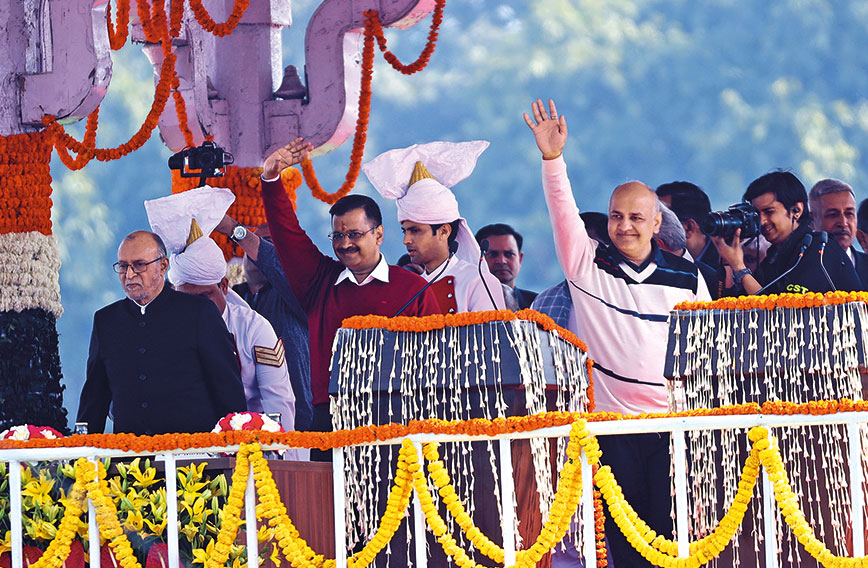 But much earlier, Kejriwal, through Parivartan, an NGO he headed, campaigned to get people their rations in Delhi, holding public hearing after public hearing to expose corruption at ration shops. He once set up a table outside the passport office to counter the sway touts had over passport applications.

Street-level experience as activists has held Kejriwal and Sisodia in good stead. Their understanding of local issues runs deep and dates back to the years when they struggled against daunting odds to take on entrenched local interests.

As Kejriwal’s NGO became part of the right to information campaign, public hearings were held to make contractors accountable for municipal works and assets.

We, at Civil Society, covered several of these public hearings, mostly in remote corners of the city. By encouraging people to speak up about the quality of road repairs or the replacement of hand-pumps or why rations hadn’t been distributed, damning locality-level information became available on development and services in Delhi.

For instance, a public hearing in Sundernagari in December 2002 revealed: “In eight cases of road construction analysed, against the two layers of stone aggregate that was reportedly put (and paid for) before the bitumen mix was laid, according to the residents, only one layer of stone aggregate was put in six cases and not even one layer was put in the remaining two cases.”

This experience is the foundation on which AAP’s policies and programmes are shaped. They also define AAP in a way that attracts people of all ages and classes who are fed up with the established parties and politicians who lack the vision and determination to bring meaningful change. 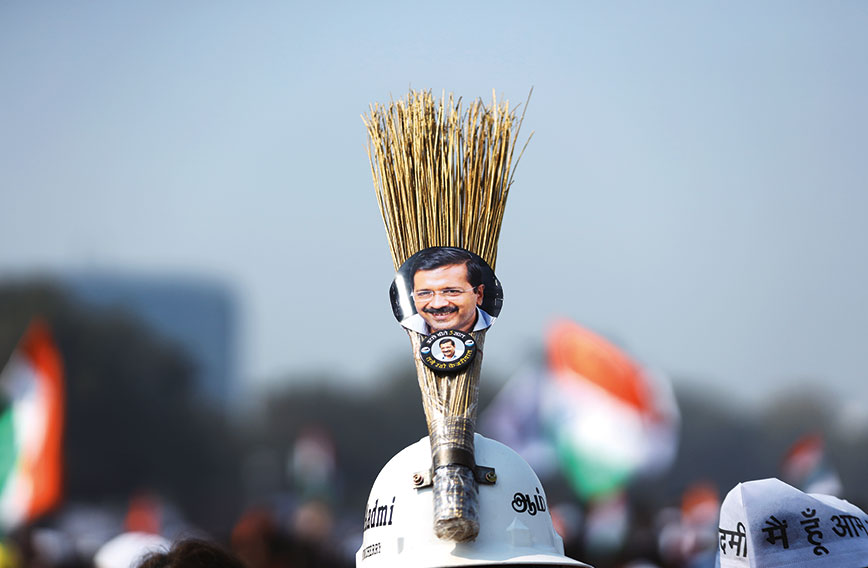 Critics of Kejriwal accuse him of overvaulting ambition. It is said he used fellow travellers in groups like the Mazdoor Kisan Shakti Sangathan (MKSS) and National Campaign for People's Right to Information (NCPRI) to build a political career for himself. To many his grip on AAP is a matter of concern. He is seen as building a personality cult as opposed to a democratic party. It hasn’t been forgotten that co-founders of AAP like Yogendra Yadav, Prashant Bhushan and Shanti Bhushan were summarily thrown out of the party.

Kejriwal’s strategic references to himself as being a good Hindu and saying that the party’s victory had the blessings of Hanuman have been criticized. Nevertheless, Muslims and other minorities voted overwhelmingly for AAP and there seems little doubt about the party’s secular credentials.

AAP’s freebies for water and power are also criticized. They are seen as mere ploys for retaining power. In the long term they would almost certainly be unsustainable. Where would the money come from? While good for bringing in votes, they shouldn’t be confused with long-term development strategies.

The critics say that the AAP government is confusing populism with governance. For instance, its record in complex tasks like curbing pollution and augmenting bus fleets has fallen far short of expectations.

Nevertheless, building a new party hasn’t been easy. Electoral politics is a minefield. Kejriwal has shown that he has the ability to negotiate the minefield and survive on his own terms. AAP has had to use every stratagem available to it to survive. But it has stuck to decency. Going forward it will have to review many of its populist initiatives. But for now, AAP has the luxury of basking in the success of its electoral triumph.