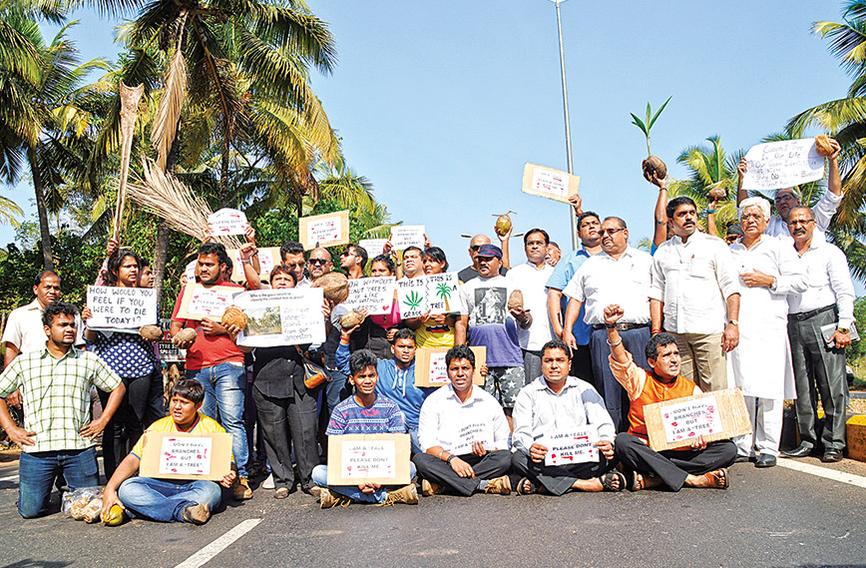 In Goa, where an argumentative mindset is part of the local identity, there are always two sides to a story, sometimes three. The coconut tree issue, which catapulted the Goa Forward Party (GFP) from one MLA to three, is one such story.

For much of the debate, which started in December 2015 when the then Bharatiya Janata Party (BJP) government decided to strip the coconut palm of ‘tree’ status, the approach has been to save this ubiquitous tree or at least give the impression of saving it. Goa without its coconut trees is like the US without the Grand Canyon.

So, when the GFP found itself in the new government, thanks to some deft political manoeuvres by Chief Minister Manohar Parrikar, it was time for a solution, even a symbolic one.

About a month ago the GFP and the BJP released a common minimum programme, which, among other things, promised to re-designate the coconut palm as the state tree. All seemed hunky-dory and the symbolic issue appeared headed for a symbolic solution. It was then discovered that Goa already had a state tree — terminalia elliptica, or matti as it is commonly known.  Nobody knew about this and it took former forest minister Rajendra Arlekar to remind the government that it already had a state tree.

So, what happens now?

The government, and particularly the GFP, finds itself in a bit of a spot. In order to make the coconut tree the state tree it first has to denotify the matti and cabinet approval is required for this. Said Vijai Sardessai, President of the GFP: “The government has the power to review and we can have a new state tree.”

But this is easier said than done. The former forest minister has a different point of view. He explained that there is no need to declare the coconut tree the state tree as it already enjoyed that status. “When we think of Goa we think of the coconut tree. The tourism department uses it extensively to promote Goa as a destination, so there is no need to declare it the state tree,” he said.

The former minister foresees a problem in elevating the status of the coconut tree. “First, the government will have to take a decision to denotify the matti tree and then declare the coconut tree as the state tree.” This could prove to be difficult. Sardessai said, “The promise to make the coconut tree a state tree is part of the common minimum programme and it will be implemented.” He did not say how long it would take.

Miguel Braganza, secretary of the Botanical Society of Goa and former agriculture officer, agrees that the move to declare the coconut tree the state tree is symbolic but adds that it will make a difference to the people. “Ninety-nine percent of the people don’t know anything about the matti tree. Not all foresters know about it. The coconut tree, on the other hand, is easily recognised and is therefore symbolic.”

In any case, giving the coconut palm state tree status is largely symbolic because the real problem lies elsewhere. Goa’s coconut production has remained stagnant over the last 15 years. Between 2000 and 2015 the total number of nuts produced fluctuated in the narrow range of 125 to 129 million nuts per year. More important, the figures did not rise after the coconut tree was brought under the Forest Act in 2008 by the Digambar Kamat government. The conclusion is, the debate on the coconut tree tends to remain in the domain of symbolism and no government felt the need to go beyond it. 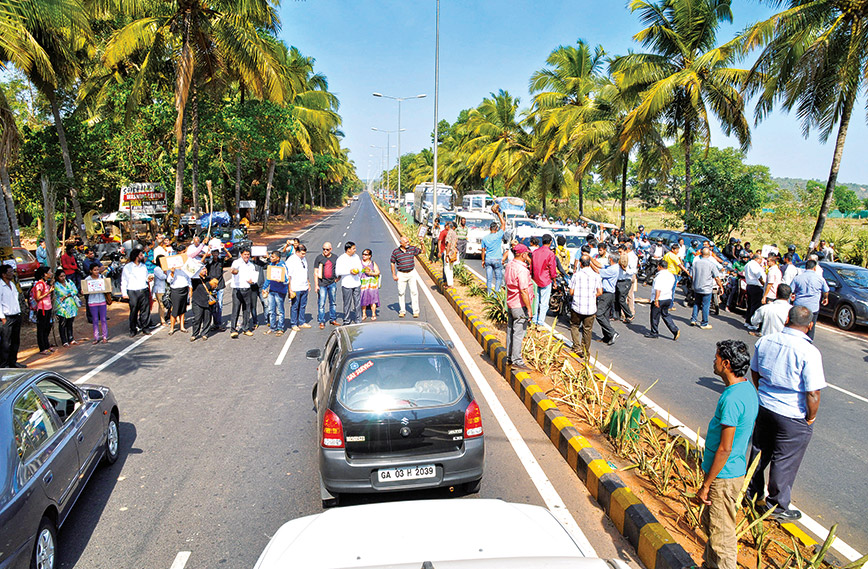 A busy road blocked in protest

At the heart of this story is economics. Coconut tree planters are not getting enough for their produce. Second, the yield is as low as 27 to 30 nuts per tree per year. What they ought to get is at least 135 nuts per year. “The yield is poor because hardly anyone takes care of trees. Fertiliser has to be put at least once in three months, but here, once the tree grows it is forgotten,” lamented Braganza.

No wonder planters prefer to sell their property to either builders or industrialists. In fact, it was a project to set up a brewery in the village of Amdai in Sanguem taluka that started it all. When it became known that over 500 coconut trees would have to be felled to make way for the project, people woke up. Then came the amendment and people put two and two together and the fate of the government was cooked.

“The project had nothing to do with the amendment,” argues Arlekar who spearheaded the amendment. “The process to amend the Forest Act was started by the previous minister in response to demands from planters.” But few believe him.

Goa has a large and thriving tourism industry. Government statistics show that at least 50 lakh tourists, both foreign and domestic, visit the state every year and it’s no wonder that there is a huge demand for tender coconuts which fetch a price of up to Rs 35 a piece in the market.

If planters shift to tender coconuts they could earn at least four times more. But this is not happening because of a mindset that places kernel above water. “They are not reacting to the market,” explained Braganza who was recently called by a planter in Merces, which is about three kilometres from the capital of Panaji.

“The planter was earning about Rs 20,000-25,000 per pluck and had an offer of Rs 80,000 for tender coconuts. He called me because he was worried if plucking tender coconuts would damage the tree,” said Braganza. “So there is a psychological block.”

No one seems to be addressing the economic side of the story and it would not be out of place to say that the coconut tree has gained little from political vicissitude over the last 15 years. It never enjoyed any status under the Forest Act and no one really bothered about it. Then, in 2007 the Goa Bachao Abhiyan started an agitation after coconut trees were felled in a village called Nauxim. The then government understood the political implications and in 2008 brought the coconut tree under the Forest Act. “It was still not a tree, but it was brought under the Act to prevent cutting,” explained Braganza. And that is where it remained until January 2016.

The government needs to go beyond symbolic gestures. Braganza is of the view that if the benefits extended to mango growers like a subsidy of Rs 2 lakh per hectare was extended to the coconut planters, it might inject some hope. However, the key lies in reacting to the market conditions and beating cheaper imports from neighbouring states.