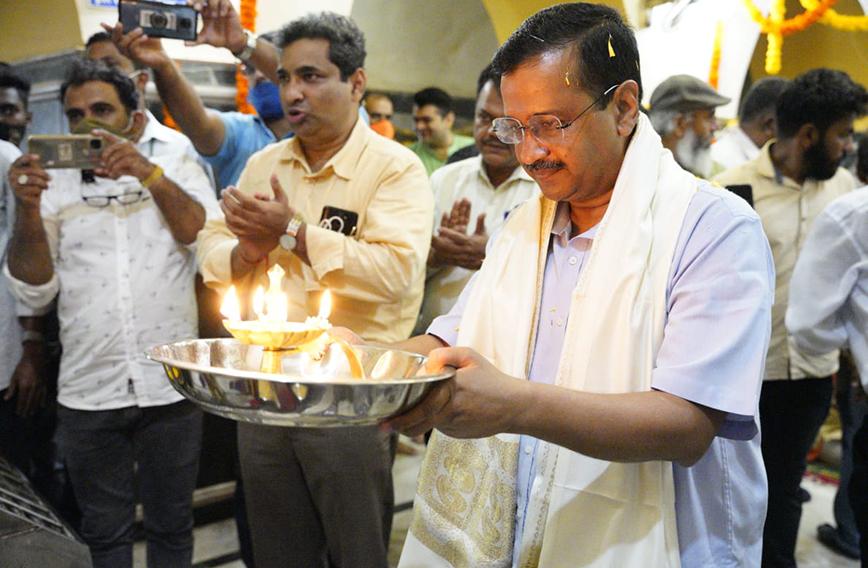 Everyone is in Goa now!

The tiny state of Goa has been making national headlines. Assembly elections, normally predictable, are now an exciting affair.

The Aam Aadmi Party (AAP) and the Trinamool Congress (TMC) are the surprising contenders for power in the state, each fighting all 40 seats.

Both parties have trekked across the country from Delhi and West Bengal. Their record of clean governance and development has found resonance among Goans.

They also have doughty leaders in Mamata Banerjee and Arvind Kejriwal who not just promise alternative politics but have shown that they can defeat the BJP and the Congress.

Banerjee and Kejriwal are streetfighters and a David vs Goliath contest has popular appeal. But is this enough to get people to vote out their traditional parties?

Key to the success of the AAP and the TMC will be how much of a local presence they have been able to build. It will also matter how fed up Goans are with decades of sub-optimal governance. Are they in the mood for a drastic change?

Slowly, but surely, the election juggernaut has begun its lumbering roll. When Mamata Banerjee arrives on October 28, it is as a giant killer having withstood a brutal Narendra Modi and Amit Shah offensive in West Bengal just months ago. She is going to be a star attraction.

Other political heavyweights have been camping here quietly, like P. Chidambaram of the Congress. He has been put in charge of the Congress in Goa and is literally camping here to ensure that the fiasco of 2017 is not repeated. In that election the Congress won a majority, but the BJP acted with lightning speed and cobbled together a government under Manohar Parrikar.

This time, however, the mood is decidedly different. In many ways AAP and TMC are setting the agenda and forcing the bigger parties to respond.

If Banerjee brings star value, the TMC has also been doing a lot of serious groundwork.

AAP was an early mover in July, when Arvind Kejriwal announced that every family would get 300 units of free electricity. This created a huge buzz and both the Congress and the ruling BJP were forced to react. Later in the month the state’s power minister, Nilesh Cabral, picked up the gauntlet and had an open debate on the issue with his Delhi counterpart, Satyendra Jain. With charges and counter charges flowing free and fast and statistics thrown in for good measure, at the end, it was difficult to ascertain who won or lost. But the ruling BJP was rattled. A fortnight later on August 15 Chief Minister Pramod Sawant announced that every family would be given 16,000 litres of free water per month. In October he told the House that 56 per cent of families had benefitted from the scheme.

Then in September Kejriwal was back with a promise of 80 percent reservation of jobs in the private sector for sons of the soil, a monthly remuneration of Rs 5,000 for families affected by closure of the iron ore mines and those in the tourism sector hit by the pandemic.

He also promised that every family would get one government job and jobless youth would be given a dole of Rs 3,000 until they find jobs. Once again AAP was back in the news, even though these promises had already been tried and tested in some form or the other in the State. Luizinho Falario, is probably the grandfather of the ‘80 per cent reservation of jobs for sons of the soil’ scheme which he suggested nearly three decades ago when he unveiled the first industrial policy for the State.

The father of doles is probably the late Manohar Parrikar who launched the Dayanand Social Security Scheme in 2002 with a monthly grant of Rs 5,000 to deserving senior citizens. In 2012-13 he first announced a dole for jobless youth and revived the scheme in 2018.

Over a month ago, I-PAC (Indian Political Action Committee) led by Prashant Kishor, the mastermind behind the spectacular return of Mamata Banerjee to power in West Bengal, arrived in the state without much fanfare. The 400-strong team got down to work and presently has two highly qualified members camping in each of the 40 constituencies. The job of the constituency-level teams is to identify movers, shakers and influencers and convince them to join the party. It is apparent that they are looking for people who matter and can make a difference in the constituency and on the political structure. Then, came the big ticket move. In the last week of September, Navelim MLA and Congress leader Luizinho Faleiro joined the TMC.

As far as political moves go, this was very Goaesque in the land of sun and sand and swaying political loyalties. Faleiro's switch, however, was different and in every way jaw-dropping because he had remained loyal to the Congress ever since the merger of the Goa Congress with the Congress after the language agitation.

Subsequently, Sanguem MLA, Prasad Gaonkar pledged to join the party once the term of the Assembly ends. Vijay Sardesai’s Goa Forward Party is also reportedly in talks with the TMC and so is the MGP. Both won three seats each in the last elections.

The buzz created around the entry of Faleiro into the TMC’s moves were not lost on AAP and a few days back Kejriwal welcomed the once-formidable Congress leader Dayanand Narvekar into the party fold. A prominent lawyer, Amit Palekar also joined the party in the presence of Kejriwal.

This is the TMC’s first election in Goa. For AAP it is the second time. In 2017, AAP contested in 38 seats. It garnered 6.27 per cent of the votes (57,420) but forfeited its deposit in 38 constituencies. AAP candidates succeeded in crossing 4,000 votes  in one constituency.

Goan politics has numerous cases of MLAs leaving one party to join another midstream and the electorate has, by and large, been accommodative. Goa’s most volatile decade was between 1990 and 2000 when chief ministers came and went in quick succession. Parrikar first came to power after engineering defections in the Congress, even while supporting a government put together by another set of defectors. He fell from power when the Congress re-engineered defections. The present Sawant government got a boost in the arm when two-thirds of Congress MLAs merged with the BJP. Besides this, politics in the state is personality based and that is why the NCP with 2.2 per cent of the vote has one seat (Churchill Alemao) in the Assembly.

While the TMC and AAP attempt to position themselves as the main challengers to the BJP, the political question that begs an answer is, can any one of them completely replace the Congress, which, although facing an existential crisis at the Central level is still a force to reckon with in the State? On the other hand, it would be foolhardy to dismiss the BJP even though Sawant will be facing his first Assembly election as leader of the BJP.  The BJP has a formidable base but Sawant is not Parrikar.