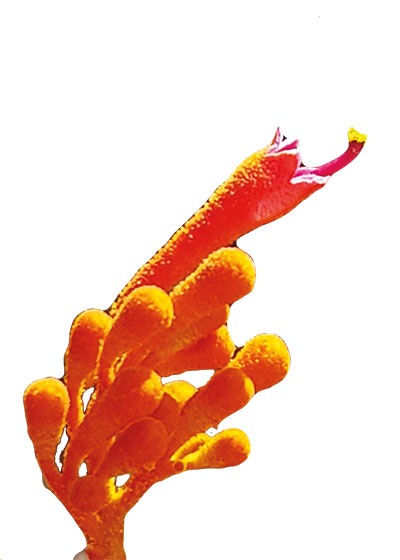 The Scarlet Sterculia or the Bonfire tree, also known as Sterculia colorata Roxb, is a medium-sized tree with beautiful, large, showy leaves. Its tender leaves are spectacular. This deciduous tree sheds leaves in winter but its flower buds arise immediately after its leaves fall. Its orange-yellow flowers are dramatic as they quickly grow from bare stems. The whole inflorescence including the tree’s stalks are covered with colourful velvety hair. Since its flowers are large and showy, the tree adds a brilliant look to gardens and avenues.

The Bonfire tree is a comparatively rare tree found occasionally in the Deccan hills, in the lower altitude of the Western Ghats and in parts of Assam, Meghalaya, Odisha, Madhya Pradesh. In Assamese it is called Jori-Odal, in Kannada Bettada Hatthi, in Malayalam Malamparatti, in Marathi Kaushi and in Tamil Malaiparutthi. The Bonfire tree is used in Ayurveda, homoeopathy and folk medicine for urinary disorders, mental problems and jaundice. 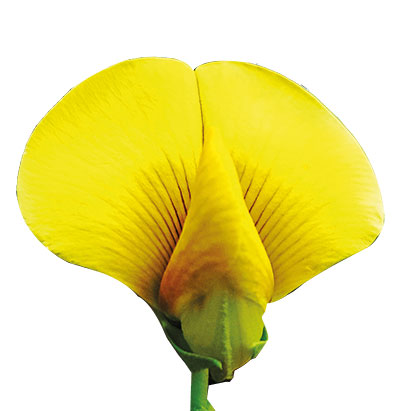 Rattle pod or Crotalaria retusa L., is a herb which reaches one metre in height and has many, clearly radiating branches near the ground. The appeal of this unique herb lies in its extraordinary inflorescence that attracts numerous pollinators especially colourful butterflies. If you are looking for flowers that thrive in the scorching sun and heat then this herb is your best choice!

Rattle pod can be grown in containers too. Every end of its branches is ornamented with 30-cm inflorescences with amazing yellow flowers. Its large petals look elegant with purplish lines and pinkish-orange backs. These flowering branches slowly transform into rattle sticks with many inflated attractive pods. These pods on maturity turn black and create an amusing sound when shaken.

In Hindi Rattle pod is called Ghunghunia, in Gujarati Ghughra, in Kannada Gijigiji, in Malayalam and Tamil Kilukiluppai and in Telugu Giligicha. According to ethnobotanical studies this herb is used against poisoning, fever and respiratory complaints. 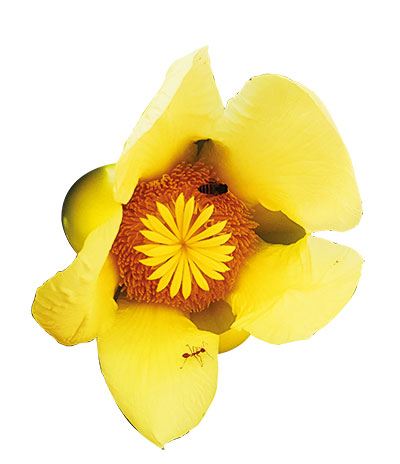 The Elephant Apple tree or Dilleniaindica L. is a large evergreen reaching 30 metres in height. The characteristic features to identify this tree in the field are its ranchlets which have V-shaped leaf-scars. The Elephant Apple tree’s leaves are strikingly large and prominently corrugated with impressively imprinted veins. The tree's flowers are  conspicuously large, up to 20 cm across, and very showy, with huge white pendant masses of stylar branches surrounding deep golden yellow stamens and petals.

These trees will look absolutely spectacular in avenues and in landscaped gardens. The tree’s fruits are large, up to 12 cm across, unique and technically a false-fruit where the yellowish-green sepals play the role of mimicking fruits. Seeds are many and embedded in fibrous, edible pulp. These fruits are reported to be a good source of food for herbivores especially for megaherbivores such as elephants and hence the name ‘elephant apple’.

The tree grows in moist forests almost throughout India. Known as Bhavya in Ayurveda, it is used to tackle respiratory and central nervous system disorders and also considered to be a digestive drug. In Hindi the tree is called Chalta and in Kannada Kalthega. 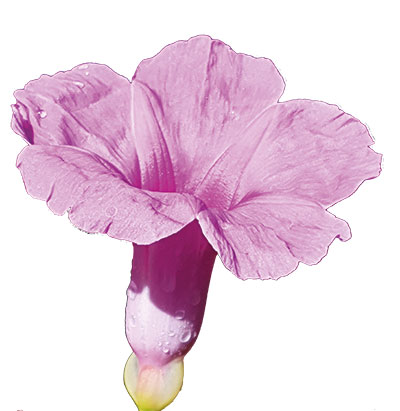 The Giant potato or Ipomoea mauritiana Jacq plays a  prime role in providing better health to women. The Giant potato is a tuber-bearing vine with beautiful bell-shaped, pinkish-purple flowers belonging to the Morning Glory family, Convolvulaceae. Its flowers are  pinkish-purple, funnel-shaped, up to 6 cm across with narrow tubes five cm long.

The Giant potato usually grows in open areas in moist deciduous forests. It has also been found in riparian vegetation, lowland forests and in grasslands throughout warmer parts of India. It is also cultivated for its medicinal tubers. The tubers are used to moderate menstrual discharge and often prescribed to increase secretion of breast milk. The Giant potato is also prescribed in case of debility after delivery and to increase weight.

The Giant potato is called Vidari or Ksiravidari in Ayurveda due to its lactation-inducing properties. In Malayalam and Tamil it is called Paalmuthukku. In Kannada and Telugu it is called Bhumi chakkaragedde and Bhuchakragedda, respectively. In Hindi and Marathi it is called Vidarikand or Bhuyikohala. 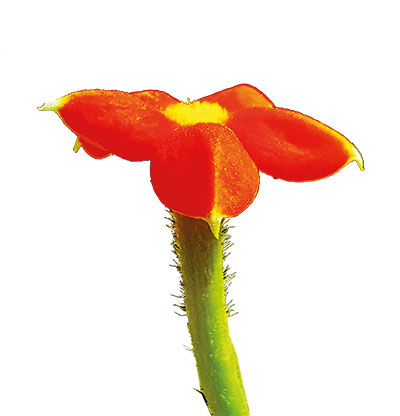 Plants of ornamental value are generally grown in gardens to increase the aesthetic features of landscapes. The ornamental features of such plants may not necessarily be flowers but could also be brightly coloured foliage, curious looking fruits, unusual forms and textures
of barks/stems and so on. Mussaendafrondosa L., belonging to family Rubiaceae, is one such wild beauty that can be spotted even at a distance due to its very shining, large, leaf-like floral part.

It is called Bellila in Kannada, Vellila in Malayalam and Shruvati in Sanskrit. In English, it is called  Flag Bush or White Lady.

This wild beauty also has several medicinal uses. Its leaves and flowers are crushed and applied externally to heal wounds. Its shining leaf-like bracts are boiled in water and the water is used as shampoo for cleansing hair. It is also used in the treatment of jaundice. The juice of the plant is used to treat eye infections. The decoction of the leaves can be taken orally to get rid of intestinal worms. Bellila is a common plant which grows in moist deciduous forests and in the evergreen forests of the Western Ghats. 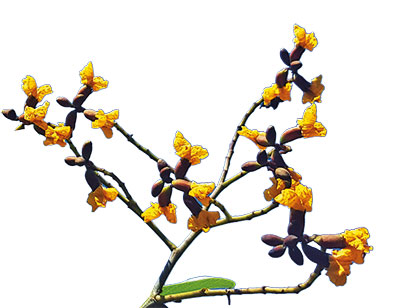 Indian tradition is known for its close connect with nature and the respect it accords to Mother Earth. In this tradition, nature is seen as superior to man. Trees are held in high esteem. One such tree which is deeply appreciated is the Benga also known as Pterocarpus marsupium Roxb, belonging to the family Fabaceae.

The Benga tree reaches a height of 18 metres. Its trunk and branches exude a bright red resin. The tree’s bark is rough and longitudinally fissured. Inflorescences are panicles, terminal or axillary, up to 15 cm long. The Benga’s flowers are two cm across and golden yellow. The bright yellow flowers interspersed with dark-coloured flower buds and stalks resemble a tiger’s coat, hence the name Vengai in Tamil and Venga in Malayalam. In Sanskrit the tree is called Asana and in English it is known as the Indian Kino tree. Kino means medicinal resin. This resin is used for the treatment of bleeding and diarrhoea. The tree’s bark is extensively used to tackle diabetes. Its leaves treat various skin problems. The tree is found in mixed jungles and in the dry deciduous forests of southern and central India.