Observing intoxicated butterflies flitting from flower to flower is one of the most soothing sights in a garden. Most garden aficionados therefore look for plant species that can attract these fanciful little creatures. One such nectar-yielding species is Rotala aquatica Wight, commonly called Fringed Flower. Known as an ‘amphibious’ herb since it can grow both in shallow water bodies and on land, this slender herb with its creeping stems and rooting usually at lower nodes, bears gorgeous flowers. The fringed flower with semi-succulent, shining, four-angled stems has tiny leaves. Loads of fringed pink flowers are a feast for the eyes especially against sunlight. This flower forms a lovely ground cover holding down soil and gentle marshy slopes. Emerging between little boulders, the species can also be exploited as an alternative to grasses.

Anjani in Marathi or Memecylonumbellatum Burm.f. is one of the most beautiful trees during flowering. It is a small tree, reaching 25 feet, which blooms twice a year. 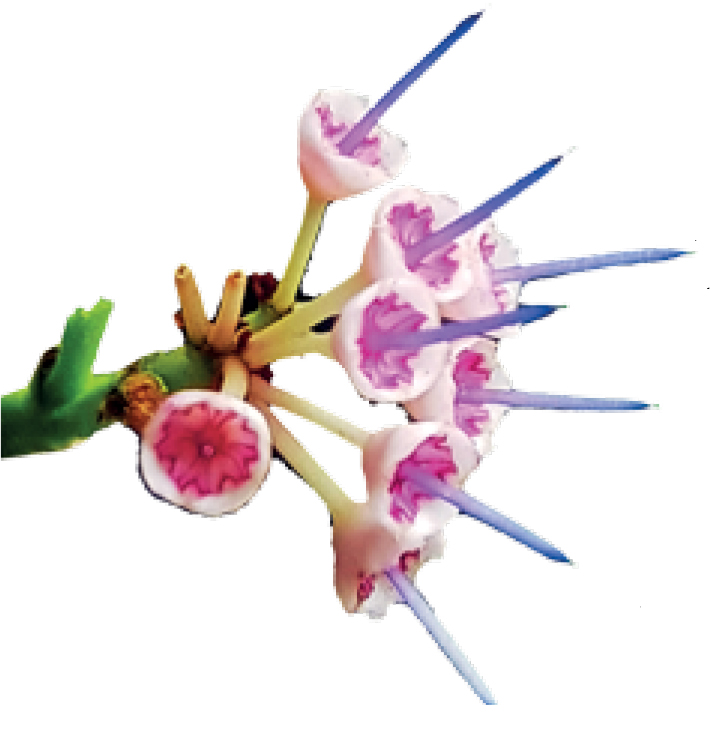 This tree proves that there is nothing more spectacular than sighting a flowering tree in full bloom. Anjani puts forth dazzling heads of bright blue flowers amidst colourful clusters of flower buds. It definitely creates memorable landscapes. This small tree can be used to create lovely focal points in smaller spaces. The flower highlights walkways in landscapes when planted on both sides. It is used in our traditional systems of medicine to treat gonorrhoea. It is commonly known as the Delek Air Tree in English, Anjan in Hindi, and Kaaya or Neimaram in Tamil. 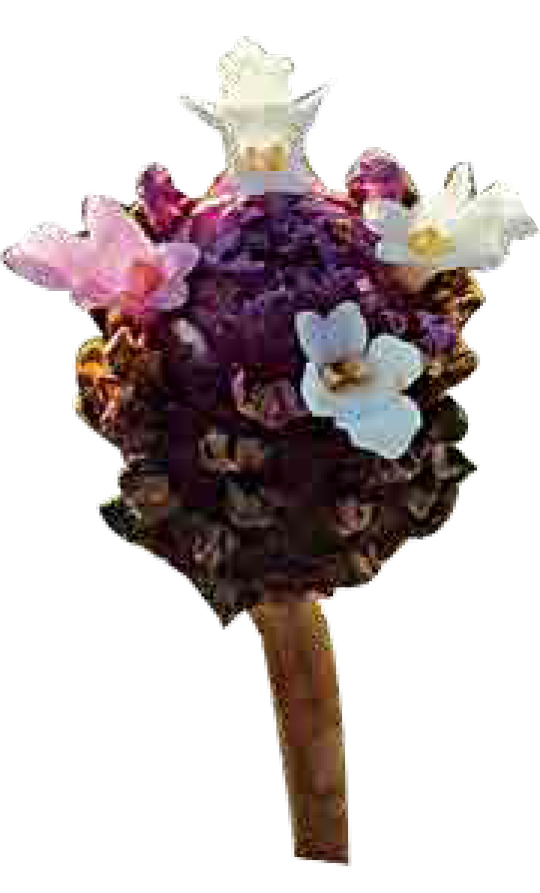 Phyla nodiflora (L.) Greene, popularly known as Jala Pippali in Ayurveda, is a marshy plant that grows at the edges of water bodies. It is found almost throughout India. Jala Pippali is often grown ornamentally as a ground cover plant. The plant’s inflorescence consists of a purple centre encircled by small white-topink flowers on the periphery and thus mimics a matchstick. Hence it is often called 'match weed' ! Interestingly, this wetland species does not demand much water. It is a perfect choice for any style of garden. You can grow this plant not only for its beauty but also to harvest ‘pippalis’ (inflorescences) for their gentle curative properties as a hair tonic. These beautiful inflorescences can be enjoyed almost throughout the year. Jal Pippali can be planted in hanging pots, allowing its stems and flowers to droop and create a splendid look! Common names in India include Bukkan in Hindi, Poduthalai in Tamil, Hole Hippali in Kannada and Ratolia or Vakkan in Marathi. 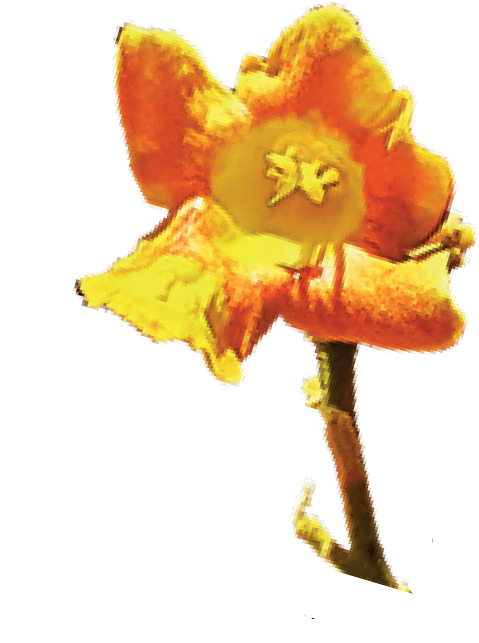 Gambhari (Gmelina arborea Roxb) is popularly known as white teak in English. Gambhari is a handsome, fast-growing, moderately-sized deciduous tree reaching 20 metres in height. This tree is leafless from February to April but is adorned with bunches of lovely flowers, which are large and yellowish-brown, on branched panicles. The flowers produce enormous amounts of nectar, helping in producing high quality honey. Gambhari is native to India. It is found in the sub- Himalayan tracts and in Uttar Pradesh, Punjab, Dehradun, Odisha, West Bengal, Assam, Madhya Pradesh and southern India. The leaf juice is considered a good mouthwash to treat ulcers. The flowers and fruits are beneficial for treating leprosy, anaemia, ulcers  and  constipation. The flowers are also believed to be aphrodisiacs and are used as a hair tonic too. The plant is known as kumizh in Tamil and Malayalam, shivani in Kannada and gummadi in Telugu. 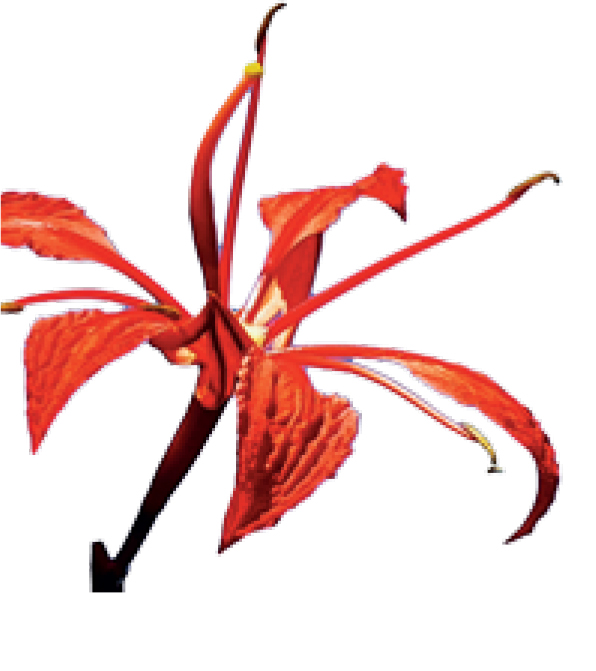 Flowering vines can add colour and beauty to any untidy spaces or grungy structures or brighten up a trellis. These large vines can also provide privacy and screening if utilized diligently! Scarlet bauhinia or Bauhinia phoenicea is one such liana in the wild that can replace many species of exotic and invasive climber species that are extensively used in our gardens! It is endemic to the southern Western Ghats (Karnataka, Kerala and Tamil Nadu). This vine has been assigned red or ‘vulnerable’ status by the International Union for Conservation of Nature (IUCN). It is an exuberant, fast-growing climber which climbs up to 20 m. As a heavy climber, it needs strong support and should not be planted with other slender vines. Sprawled on compound walls, it brings an earthy feel to a house. The brightly-coloured, tender leaves with prominent reticulations of veins are particularly eye-catching. The beauty of the scarlet flowers makes this climber iconic to landscapes. This native liana adds fabulous speckling and unusual morphology to gardens, transforming them into tropical bouquets. 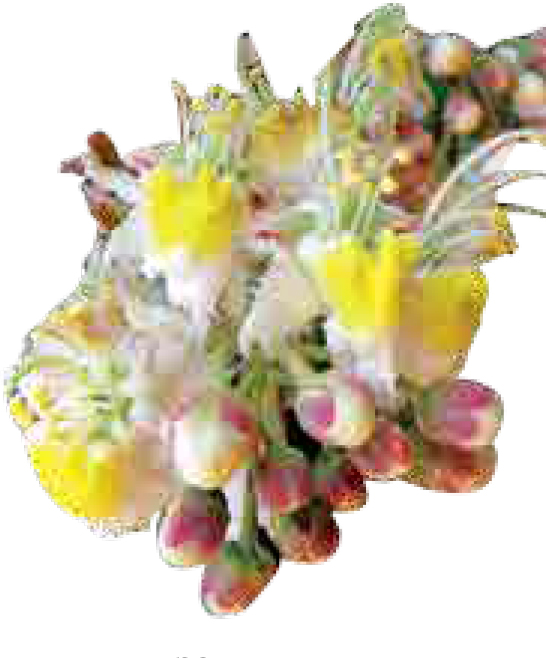 Hiptage benghalensis (L.) Kurz, traditionally known as Madhavi Latha, is a perennial evergreen liana. It is native to India. Madhavi Latha has shiny green foliage, white fringed petals and one median yellow petal, creating a wonderful burst of colour. The flowers bloom abundantly and intermittently throughout the year and emit a mild fragrance too. This climbing species can help cover less attractive spots and is ideal for large spaces as it sprawls all over quickly! Though it is a liana, it can be clipped to form a small tree with very little canopy. White petals with bright yellow petals in the centre contrast with its shiny green backdrop, making it a picturesque climber. Being a dominant species indicating dry areas and a type of salt-tolerant soil, it can be grown in drought-prone areas as well as in coastal climates. Its fruits are samaras with three spreading, papery wings that help seed dispersal on the wind. It is useful in treating cuts and wounds, relieving burning sensations, bronchial complaints, coughs and ulcers.