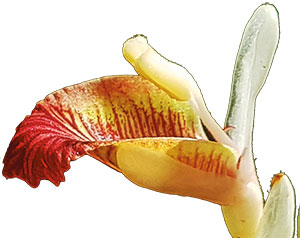 Alipniacalcarata (Haw.) Roscoe is a perennial shrub known by its trade name, lesser galangal or snap ginger. The shrub’s rhizomes and stalks are aromatic. Shoots are very long, shiny, and have inflorescence of 10 to 15 cm long lax spikes which droop if large. Flowers are large, leathery, white with red blotches at the base and beautiful streaks throughout. The blooms are long-lasting and beautiful hence the plant is used as an ornamental flower as well as a cut flower. With long, striking leaves and lots of long-lasting, red flowers, this ginger is one of the best accents in a shady landscape. Snap ginger is useful as a tall informal hedge or as a screen or a backdrop. It can also be used as a border hedge. It is quite popular for its medicinal uses against cough, asthma and fever. 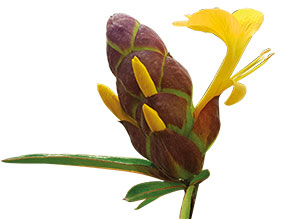 Hop-headed barleria is a much-branched under-shrub which reaches up to 1.5 m in height. Its stems are armed with spines and inflorescence consists of axillary and terminal spicate clusters, many-flowered, up to 10 cm long. Flowers are bright yellow and borne on spine-tipped, leaf-like bracts. It is found to grow occasionally along hedges and neglected areas near habitations, open forests and rocky habitats throughout India. This spiny shrub is hardy, drought-resistant and capable of tolerating full sunlight. It thrives in almost all types of soil.

The plant has bright yellow flowers which emerge sporadically from cone-like inflorescences, surrounded by green leafy bracts. It can be planted in groups in a flower zone or to form borders or as clumps. Hop-headed barleria is a lovely addition to the collection of xerophytes. Planting it intermittently or in a continuous row in a well-maintained lawn will enhance the surrounding landscape. Since it is armed with spines, it can protect itself from grazing animals. Planting it along fences and edges can protect the entire garden. Traditionally, it is used against herpes and poisonous bites. 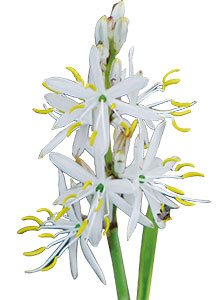 Safed Musli is a popular medicinal plant endemic to the wet forests of peninsular India. It is scientifically known as Chlorophytum borivillianum Santapau & R.R. Fem. As the genus name Chlorophytum (chloro means green and phytum means plant) indicates, it is an evergreen, perennial plant.

Safed Musli reaches up to two feet in height and has a tuft-like appearance. Its roots are tuberous. It has compact foliage with seasonal beautiful, dense, star-shaped white flowers. This plant can primarily be used as a ground cover due to its short-stature, clump-forming habit and dense, shining foliage. Its drooping leaves make it perfect for hanging pots.

Safed Musli is a medicinal plant suitable for an indoor environ with low-light conditions. It also looks stunning if planted in a mass on well-maintained lawns. As a border plant, this species can be used to define the shape of thematic layouts. Its dense rooting system and covering foliage can be employed to prevent soil erosion. Its arching inflorescence starts rooting when it touches the ground and new leafy plantlets are produced. This is a unique feature of Safed Musli. Hence, it is also called a ‘walking plant’. The specific epithet, chlorophytum borivillianum  indicates its native range — Borivali is a suburb of Mumbai.

The roots are used as an aphrodisiac. Regular intake of its root powder in milk is reportedly useful against impotency and premature ejaculation. Under IUCN, this species has been tagged as ‘critically endangered’ due to its high-volume trade and reduction in its natural population. 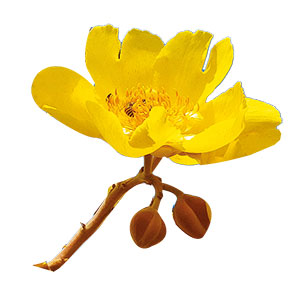 The buttercup tree, also known as Cochlospermum religiosum (L.) Alston, is a medium-size deciduous tree. The crown is usually asymmetrical with a few trunks or branches dominating it. The leaves are broad, palm-shaped and appear at the ends of the branches.  The tree blooms when leafless and looks like a big bouquet of flowers. Flowers are large, up to 10 cm across, and have an appealing charm due to their bright colour, size and magnitude. The tree’s brilliant display is composed of a multitude of lotus-like golden-yellow blooms borne in terminal flower clusters. It is a fast-growing ornamental tree for tropical climates and a perfect backyard specimen. The tree is widespread in dry forests, rocky hill-tops and also grows close to cliffs of savannahs. The specific epithet, religiosum, derives from the fact that its flowers are used as offerings in Hindu temples. 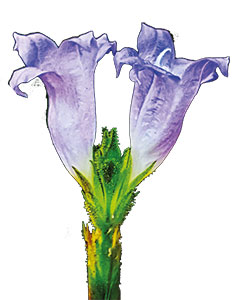 Stenosiphonium cordifolium (Vahl) Alston is a type of kurinji flower endemic to peninsular India and Sri Lanka. The plant reaches two metres in height. Its leaves are almost lance-shaped, and shining white underneath. Its upright growth makes it a salient border plant.

Its flowers are strikingly bluish-white, tubular, arising as dense clusters on the axils of leaves. This kurinji’s bushy habit and profuse flowering makes it a wonderful focal point for  landscapes and an eye-catching addition to borders and clumps. It prefers full sun to fairly high temperatures and is a fast-growing native shrub which does not require even regular watering. It is a beautiful shrub that enlivens the garden with its lovely blooms. The shrub’s numerous stems and flowering twigs make it an ornamental addition in native gardening. It can be planted as a single specimen, a regular clump or as a running hedge. To create privacy or a good screen, this tall shrub can be planted compactly. 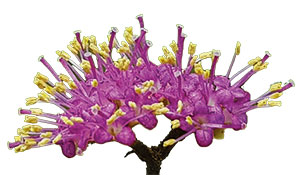 Velvety beauty berry is a lovely shrub or small tree which reaches a height of eight metres. It is endemic to peninsular India and Sri Lanka. Velvety beauty berry’s biological name is Callicarpa tomentosa (L.) Murr. Its branchlets, leaves and inflorescence are very soft to the touch. The shrub’s terminal leaf-buds are used as wicks for lighting lamps and its dense hairy leaves are lighted by applying a little oil on them.

It is believed that the Pandavas used these leaves as fire torches during their exile hence the tree is also popularly known as ‘Pandavara Batti’. Velvety beauty berry is best suited to urban lanes and gardens. It can grow well within its boundaries. Its flowers are bright pinkish-white with numerous yellow stamens making it a pictorial patch in any garden. Its mild look can grace any landscape. With many branches and a slightly broad crown, this tree is ideal for a patio. Although its native range is considered the Western Ghats, it grows well in an urban environment too. Velvety beauty berry is used to treat liver disorders, fever and skin diseases.