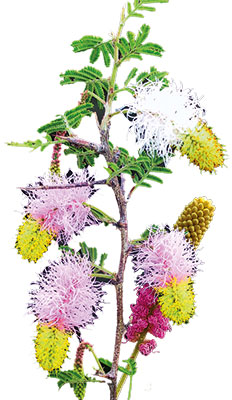 The Kalahari Christmas tree or Dichrostachys ciinerea is a Christmas tree for desert areas. It grows from a shrub to a small tree, four metres tall. Kalahari Christmas is also popularly known as Princess’ Earrings and Painted Thorn Bush. The flowers of this tree are white and yellow or pink and yellow and are born on cylindrical spike inflorescences that resemble lanterns. The flowers blossom for more than six months.

Hence, this species is ideal for any garden or landscape. The tree bears thousands of mildly fragrant flowers in numerous inflorescences. The aroma that floats in the air is enchanting. As it is a handy tree 12 to 15 feet high, it is suited to small spaces and can also be grown in larger containers outdoors. Kalahari Christmas is a well-known medicinal plant used in the Siddha system of medicine. Its leaves and pods are used as fodder and its wood is used to make simple agricultural implements. 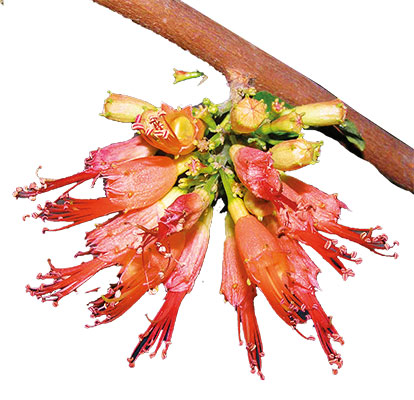 In summer the Fire Flame Bush is swathed in crimson red flowers and looks aflame hence its name. The plant is also called Dataki. Its scientific name is Woodfordia fruticosa (L.) Kurz.

Dataki is a deciduous shrub up to 10 feet tall with a surfeit of branches. Flowers can be seen in groups of six to 16 in the axils, two to three cm long, with conspicuously exerted stamens and styles. Its corolla tubular is distinctly toothed, alternating with long floral appendages. Stamens are orange-red. Dataki grows throughout India in deciduous forests, at an altitude of 1500 m above sea level.

The roots are known for their curative properties against rheumatism. Dataki is a dye-yielding plant species. Yellow dye is extracted from its twigs and red dye from its petals and used as paint and to dye silk. This species has appeared in the Red List of IUCN due to its high-volume trade.

The plant is called Datiri in Malayalam and Tamil, and Dhataki in other languages. 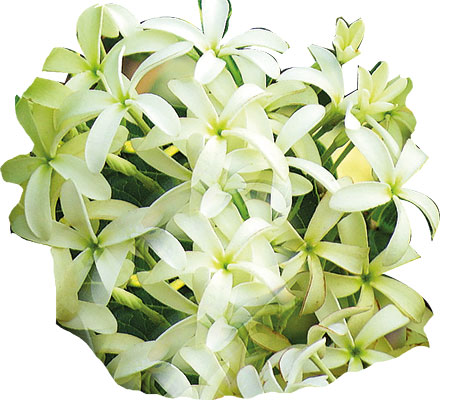 Bitter Oleander or Holarrhena pubescens is a small, latex-bearing, deciduous tree with mildly fragrant white flowers, reaching 12 to 15 feet. Bitter Oleander is called Kutaja in Sanskrit and also Conessi. A small tree, it is ideal for urban gardens because it understands its boundaries. It is also a brilliant patio tree with many branches and a little broad crown.

Bitter Oleander flowers profusely from April to July. It has bright white flowers with a mild fragrance. Though the tree is of wild origin, it performs well in the urban environment. It can also serve as an effective screen or taller hedge if it is planted in a continuous row.

The tree is well known for its bitter bark which is used to treat skin problems like psoriasis, eczema, blemishes, rashes and skin infections due to blood impurities. Bitter Oleander grows in open deciduous forests along hilly tracts up to an altitude of 1250 m. It is also found in mixed forests and clearings.

The tree is called Beppale or Kodasige in Kannada, and Kotakapala and Kuda in Malayalam and Marathi, respectively. In Tamil it is called Karuppalai and in Telugu, Tella Pala. 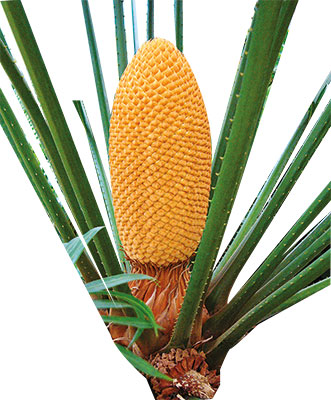 Gymnosperms are one of the oldest groups of plants on earth and fondly known as living fossils. Queen Sago or Cycas circinalis L., is one such cycad of gymnosperms well known for its medicinal properties mentioned in our traditional medicine heritage. It has aphrodisiac properties and is considered a symbol of longevity.

Queen Sago is a handsome, palm-like, evergreen tree which grows up to 12 metres. Its unbranched trunk is cylindrical with persistent leaf-scars. The plant has a large crown of compound leaves which are one to three metres long. Leaflets are about 60 to 100 pairs and arranged oppositely.

It is a dioecious plant which means it has separate male and female plants. Both male and female cones are strikingly beautiful and therefore this Cycas can be used in almost all landscaped gardens.

Owing to its medicinal properties, Queen Sago is traded in high volumes. The tree is endemic to southern India and confined to the Western Ghats. It is an endangered tree. According to the IUCN, 70 percent of its population has vanished due to habitat loss and high-volume trade.

Queen Sago is known as Madana Kama poo in Tamil, Madan mast ka phul in Hindi, Madan kamakshi in Telugu and Hintalah in Sanskrit. In Kannada it is called Goddueechalu and in Malayalam, Eanthapana. 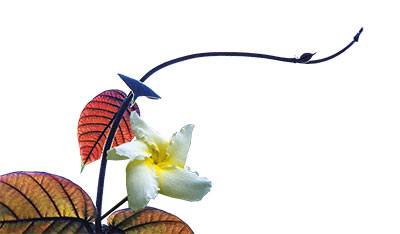 The Frangipani vine, or C. fragrans (Moon) Alston is a large, woody climbing shrub which can reach the top of the tallest tree. It has flowers in cymose clusters, bisexual, large, up to 10 cm across. Its corolla is white with a yellow throat and very fragrant.

Frangipani flowers almost throughout the year but profusely from May to July. The vine sports clusters of exuberant blooms with a rich aroma that will make your garden fragrant.

Even without its showy flowers, this climber is eye-catching with large shiny, velvety-hairy leaves and prominent, raised veins. It is a glorious, greenish-white beauty that can light up a dull garden. It is also a great backdrop for lawn gardens. In the wild, this species prefers to grow in the moist deciduous to semi-evergreen forests of the Western Ghats and northeast India.

The roots of the plant are primarily used to treat intermittent fevers, skin diseases, leprosy, constipation, cardiac debility, bronchitis, jaundice, cough and diabetes. In Sanskrit, Frangipani is called Murva or Morala, in Hindi it is known as Garbhedaro. Its Kannada name is Chandra hoovinaballi. 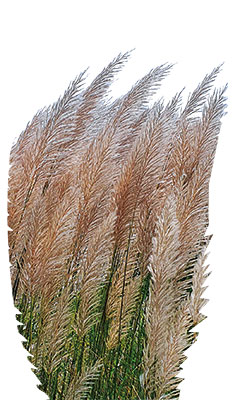 Exotic species of tall grasses are often used by Indian horticulturists and landscape architects as focal points, screens and accents. The best among them is our native grass Saccharum spontaneum L., popularly known as Kans grass or, in English, as ‘wild sugarcane’.

Kans is a tough and tolerant grass that can withstand any weather and grow up to 12 feet tall. It flowers almost throughout the year with its wispy good looks intact. A large grouping of this tall grass effectively blocks an unpleasant view. Its long inflorescences, whether during flowering or in fruiting, form a shiny silver cascade against the landscape. Kans grass can be grown along water bodies or walkways or as a huge clump on lawns. It can also be planted to prevent soil erosion. In south India, it is considered sacred. Leaves of Kans are used for thatching and making brooms. It grows wild along the banks of streams and canals,  on sandy soil, in paddy fields and marshy areas throughout India..