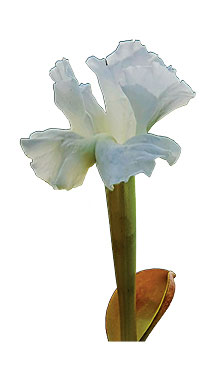 Dolichandrone atrovirens (Roth) K. Schuman., popularly known as wavy trumpet, is endemic to India. It is a medium-sized tree which attains a height of 10 to 15 metres. Dense foliage makes this tree lovely. Flowers appear in summer and fruiting continues into the next flowering season.

The flowers are large, white and trumpet-shaped. Fruits are dehiscing capsules, up to 30 cm long, beautifully twisted and speckled. The plant is comparatively fast-growing. It is much appreciated for its eye-catching foliage, and is especially suited for avenues, driveways, patios and outdoor recreation areas. The branches form a medium-sized canopy and provide shade. As the leaves create a lot of litter in summer, they make the soil fertile. In Kannada, wavy trumpet is known as udi mara, in Tamil as poombaadiri and in Telugu as oddi. It is used in traditional systems of medicine against diabetes, anxiety and as a rejuvenator. 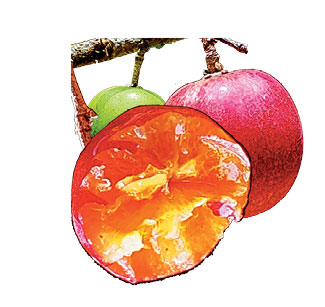 The Indian cherry or Indian plum is a joy for any garden owner. An edible landscape is both fun and functional in an urban space. Growing fruit trees, that too wild and native, as part of a frontyard landscape enhances it.

The fruit ripens early in the monsoon season and lasts for another four to five months. It is important that these berries yield fertile/viable seeds for further propagation. Adding this small tree in an edible landscape is aesthetically pleasing due to its shining foliage and gleaming fruits of various colours. The leaves and fruits are used in traditional medicine for diarrhoea and bronchial complaints. The tree is botanically known as Flacourtia jangomas (Lour.) Raeusch. It is called mullu sampige in Kannada, rubikka or lololikka in Malayalam, vaiyankaarai in Tamil, paniamla in Hindi, heitroi in Manipuri and sruvavrksha in Sanskrit. 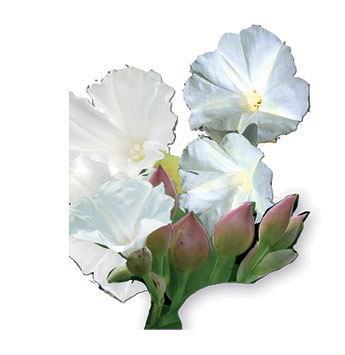 Trivrit or Operculina turpethum is a low vine commonly recognized by its flamboyant clusters of vividly hued, large flowers. It has strikingly untainted white, trumpet-shaped flowers, dark-green heart-shaped leaves and slender, purplish-green twining stems. The stems entwine themselves around their props. On closer look, one notices the twisted four-angled stems.

It is a large climbing shrub which exudes a milky sap when injured. Fruits appear as cones and later unfold as lotus flowers. The four black seeds are enclosed within the bloated, transparent, floral parts. Trivrit’s natural habitats are hedges in coastal areas and wayside thickets up to an altitude of 900 m above sea level. Flowering and fruiting can be seen in all seasons.

Trivrit is predominantly used as a tonic for the liver. It is also an effective laxative and is used to relieve chronic constipation. Trivrit also helps combat obesity. It is botanically known as Operculina turpethum (L.) S. Manso. In Hindi, it is called nisoth, in Kannada tigadeballi, in Telugu tigada, in Malayalam trikolpakonna and in Tamil sivadhai. 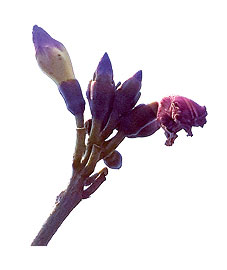 Shyonaka, botanically known as Oroxylum indicum (L.) Kurz (Bignoniaceae) is one of the 10 ingredients of Dasamula arishtam, a potent combination of the dried roots of 10 plants used in Ayurveda. It is decreasing alarmingly due to heavy trade in the critical part, the root.

Shyonaka is a medium-sized, deciduous tree that reaches almost 10 metres in height, with an irregular, linear crown. Its stem has many persistent leaf scars and the bark is prominently dotted with lenticels. Leaves are large, up to six feet long, with many leaflets. The leaves with jointed leafstalk wither at the base of the tree and look like a heap of broken bones, hence this tree is commonly known as broken bones tree.

Shyonaka is a beautiful tree with few branches, most noticeable in autumn when its leaves shed. But its bell-shaped flowers and sword-shaped fruits remain. The flowers, which open at night, are large, purplish-red outside and creamy yellow inside, about six cm long and 10 cm broad. The fruits are large, up to 100 cm long, brown, flat and woody, open along the sides and split into two parts at the time of seed dispersal. The seeds are plentiful, thin, flat and with a whitish, transparent wing. In Malayalam shyonaka is known as palakapayyani and in Tamil it is called vangamaram and venpadiri. 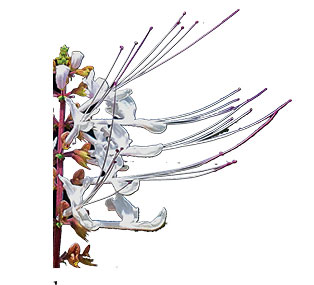 Cat’s whiskers is scientifically known as Orthosiphon stamineus Benth. It belongs to the tulsi family. It is a fast-growing perennial herb, 30 to 60 cm tall. Inflorescence is in close-whorled, pyramidal kind of racemes at the end of the branches, up to 20 cm long and six cm broad at the base and narrower towards the end. The flowers are white or pinkish-purple, about three cm long. Stamens are very prominent, longer than the corolla.

The peak period of flowering and fruiting of cat’s whiskers is between April and July. Attractive shiny white bundles of stamens jut out from the shorter flowers and catch the attention of a variety of butterflies. The dark-green, shiny leaves create a wonderful colour contrast, making this an attractive under-shrub. It can be planted in groups or to form informal borders, as clumps on rockeries or even in containers. It looks amazing as a continuous hedge on a lawn.

The leaves are said to have diuretic properties and increase uric acid excretion, therefore the ‘Java tea’ prepared from these leaves is used for kidney and bladder diseases. Most vernacular names available in different languages are just a translation of cat’s whiskers: poochameesa in Malayalam, poonai meesai in Tamil, bekkina meesai in Kannada, mutri tulsi in Hindi. In Ayurveda, it is considered a substitute for tulsi. 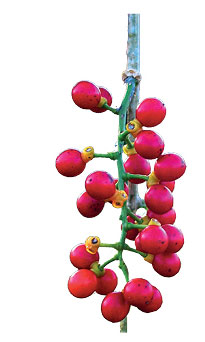 Guduchi or Tinospora cordifolia is a perennial, dioeceous climber. It is also referred to as amrta or ‘divine nectar’ in Ayurveda. The climber’s matured stems produce long, thread-like aerial roots. The leaves are heart-shaped. It is grown for its dense foliage rather than for its flowers. However, the female plants are worth seeing during fruiting. As it is a hardy plant, it can be planted any time of year. Temporary supports, such as sticks or twines, should be provided. It creeps up vertically as well as horizontally. Hence it can be planted to spread on walls or sprawl along fences, as a trellis or be allowed to hang down from roofs. In Hindi, it is known as giloy, in Malayalam as chitramrtu, in Kannada as amrutha balli, in Tamil as seendhil and in Telugu as thippatheega.