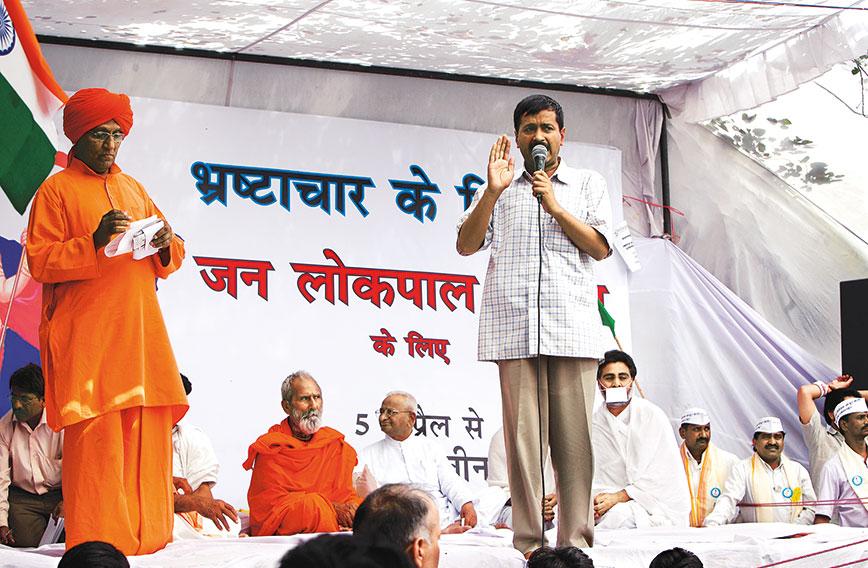 Social activism or politics by other means? 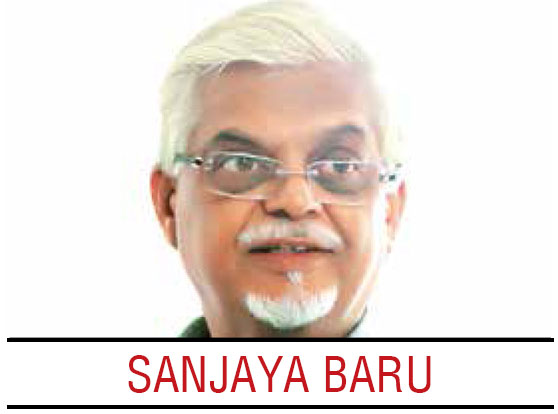 After India won independence from British colonial rule, the principal architect of that great civil society movement, Mahatma Gandhi, wanted the organisation that enabled this historic achievement, the Indian National Congress, (INC), to be dissolved. He would have preferred a new political party created that would contest elections and seek to form a government. In the event, the INC chose to convert itself from a movement into a party and form the first elected national government of Free India.

Other such civil society movements chose different routes into politics. The Hindu Mahasabha and the Rashtriya Swayamsevak Sangh (RSS), created the Jana Sangh as a political arm of their movement which would participate in electoral politics.

Whether a civil society movement should directly participate in electoral politics or support from the outside such political formations that favour their cause has remained an open and important question in the political life of democratic societies.

This question came up in a big way in Delhi when Arvind Kejriwal chose to convert the India Against Corruption (IAC) campaign into a political party, the Aam Aadmi Party (AAP) and seek office in the state of Delhi. Many IAC idealists opposed the move, while others supported it. Before AAP there were other such attempts by civil society organisations to become political parties. Lok Satta, a Hyderabad-based organisation led by a former IAS officer, Jaya Prakash Narayan, was one such. The answer to “bad politics is not ‘no politics’ but good politics”, declared Lok Satta, justifying the creation of the Lok Satta Party.

The Lok Satta Party declared that it was a political party with “a back-to-basics, pro-citizen ideology that stands for individual rights, economic freedom, and social justice. It is a party that is not trapped in the legacy of the system. It is a party with a comprehensive approach to politics and governance using transparency, decriminalisation, electoral reform, a citizen’s charter, and legislative and judicial reform.”

Apart from the direct entry of a civil society organisation — commonly referred to as a ‘non-government’ organisation (NGO), or a voluntary organisation — into such direct political engagement with governance, we have also witnessed the spectacle of several civil society activists opting to become “advisers” to mainstream political parties with a view to influencing government policy and governance systems. The most important such experiment at the national level was the National Advisory Council (NAC) set up by the United Progressive Alliance government in 2004, under the chairpersonship of Sonia Gandhi. Prominent NGO activists like Aruna Roy, Dr Shantha Sinha, Dr Jaya Prakash Narayan and Dr Jean Dreze were members of the NAC.

It is not surprising that all these experiments have brought to the fore the question of the politics and political motivations of civil society groups. The present Bharatiya Janata Party (BJP) government has focused on this question, seeking information on the funding of NGOs. While the BJP government has been more forthright in pursuing this issue, the issue itself is an old one.

In the early 1980s, Prakash Karat, who went on to become the general secretary of the Communist Party of India (Marxist), wrote a seminal essay questioning the very credentials of the NGO movement, especially such NGOs as receive financial support from outside the national border. Karat alleged the foreign-funded NGOs were implicitly, if not explicitly, promoting the agenda of imperialism.

To quote, “There is a sophisticated and comprehensive strategy worked out in imperialist quarters to harness the forces of voluntary agencies / action to their strategic design to penetrate the Indian society and influence its course of development. It is the imperialist ruling circles, which have provided through their academic outfits the political and ideological basis for the outlook of a substantial number of these proliferating groups in India. By providing liberal funds to these groups, imperialism has created avenues to penetrate directly vital sections of the Indian society and simultaneously use this movement as a vehicle to counter and disrupt the potential of the left movement. The Party has to take serious note of this arm of imperialist penetration while focusing on other instruments and tactics of imperialism. An ideological offensive to rebut the philosophy propagated by these groups is urgently necessary, as it tends to attract petty bourgeois youth imbued with idealism.” (Prakash Karat, The Marxist, 1984.)

Several non-Marxist radicals active in civil society organisations rejected Karat’s interpretation and sought to provide social justification and intellectual legitimacy to NGO activism. There was much self-criticism on what NGOs ought to be all about and in an influential essay on this issue scholars D.L. Seth and Harsh Sethi argued: “The
last two decades have witnessed a veritable mushrooming of NGOs in India. What, however, is inadequately appreciated is that the conversion of voluntarism into primarily a favoured instrumentality for developmental intervention has changed what was once an organic part of civil society into merely a sector — an appendage of the developmental apparatus of the state. Further, this process of instrumental appropriation has resulted in these agencies of self-activity losing both their autonomy and political-transformative edge. What is required, therefore, is to reorientate voluntarism from a framework of subserving the needs of delivery to one promoting self-governance in the widest sense.” (D.L. Seth & Harsh Sethi, Voluntas, an international journal of voluntary and non-profit organisations, November 1991.)

These two-decade-old interventions remain relevant even today, even as several other views on the role of NGOs have emerged. This debate will continue. The fact is that the so-called “NGO sector” is not a homogenous social entity. There are literally hundreds of thousands of NGOs across the country with varying agenda and they will continue to sprout and dissolve. Questions will continue to be raised on their funding, on organisational transparency, and so on. The fact is that NGOs have emerged as an element in India’s social, economic and political life and will not go away.

At least one important reason for the mushrooming and growth of NGOs has been the generalised disillusionment with party politics at the gram and mohalla level. Apart from the Communists and the BJP, few political parties have grassroots cadres actively engaged in socially meaningful work. Regional and caste-based parties are even worse. In states like Tamil Nadu, Andhra Pradesh, Uttar Pradesh and Bihar, the state-level political parties, mainly caste-based, do not inspire young people. This dismal situation is unlikely to change though the national parties have been trying to build a politics of social engagement at the grassroots. Initiatives like Swachh Bharat can be important catalysts for social mobilisation at the community level, drawing young people into mainstream politics. However, if this model does not succeed, new generations of political activists will remain attracted to locally active NGOs.

There is no point in going into the rights and wrongs of this phenomenon. The fact is that NGOs have come to exist. Many have become politically active and will remain so. The fact also is that all governments, irrespective of their ideological orientation, will subject NGOs to greater and closer scrutiny. If civil society won a victory against the State through the Right to Information Act, the State has responded by seeking greater transparency in the funding and functioning of NGOs.

Going forward, the interesting political question is whether a new national political formation can come out of the current phase of NGO activism. After all, the Congress party and the BJP were products of civil society activism of a different era. There are other political parties that came out of civil society activism in different parts of the country and have remained confined to small pockets of influence. In recent times, the best example of such stunted growth is that of AAP. It tried to grow out of its Delhi base, contesting elections in Punjab, Haryana and Goa but these efforts have only been partially successful. AAP has not shown the ability to grow beyond its base in Delhi.

Neither Narayan’s Lok Satta Party experience nor Kejriwal’s AAP experience will discourage other political activists in future from using the civil society route to political relevance.

Given this reality of Indian politics, what civil society organisations will have to be mindful of is their manner of functioning. Mainstream political parties and the agencies of the State will demand greater transparency in the functioning of NGOs. Especially such NGOs as have links to international NGOs, foreign funding organisations, global corporations, religious organisations and the corporate sector.

The changes in company law requiring Indian firms to devote a certain percentage of their profits to ‘socially responsible’ activities have created a new bridge between the corporate sector and NGOs. How this evolving relationship will influence politics and social activism remains to be seen.

What the AAP experience in Delhi tells us, as indeed the experience of the INC did in the early 1950s, is that when an activist enters government one has to function within the parameters set by the Constitution and the institutional codes and rules. As Prime Minister, Jawaharlal Nehru had the same problem dealing with many Congress party activists, especially the hardcore Gandhian Satyagrahis, as the institutions of governance have had in dealing with AAP activists in government. Nehru drew a line between social activism and the running of a government. Kejriwal has not been able to do so.

Civil society activists who imagine that once in power they can mould governmental institutions to their will are soon disappointed. The Indian State has evolved to a level of maturity and stability that sees newly elected political parties who come to power promising radical change in the way government functions being soon absorbed into the system and finding their options limited.

The ability of the apparatus of the State to absorb a challenge to its authority and ensure continuity is a sobering corrective to civil society enthusiasm — for ‘politics by other means’. Which is one reason why many NGO activists prefer to function within the sphere of civil society rather than enter institutions of government. The decision of many such activists to withdraw from the NAC and return to their respective fields of social activism testifies to this.

In short, even as civil society activists will remain engaged with mainstream politics, entering the mainstream from time to time, a large number of such activists may prefer to remain within their chosen sphere of activity, challenging the institutions of the State rather than seeking to manage them.

What the AAP experience teaches us is that if mainstream political parties are unresponsive to the demands of civil society — be it on issues like corruption, or the environment — then someone or the other from among the activists will try to challenge the existing order and enter mainstream politics to effect change. How effective such intervention will be remains a matter of conjecture.