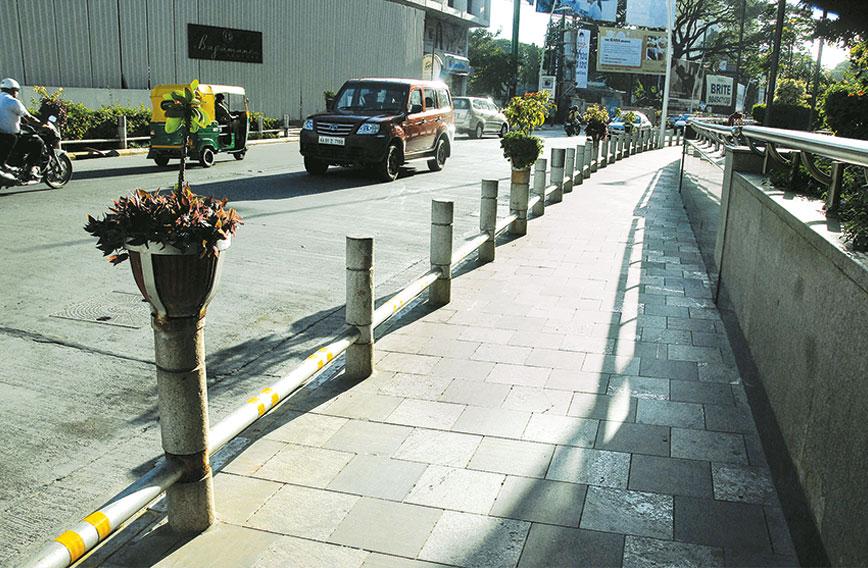 A road in Bengaluru improved with private sector collaboration 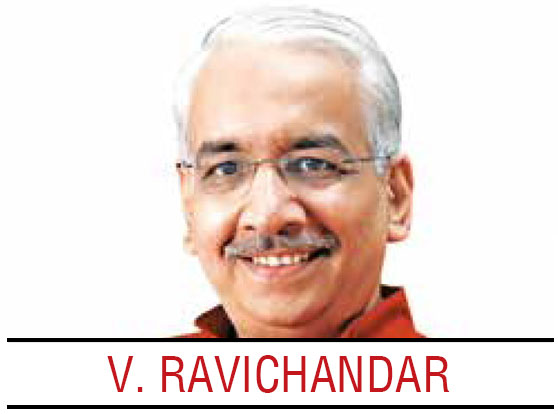 India is a rapidly urbanising country. Its 373 million urban population in 2010 is expected to touch 814 million by 2050. The built-up surface area used in urban India, estimated at 46,600 sq km in 2010, is expected to quintuple to over 258,000 sq km to accommodate the doubling in population.

We need to reimagine the way Indian cities are managed to cope with this vast expansion and its accompanying onslaught of problems like housing, sanitation, transportation, solid waste disposal, healthcare and so on.

What is needed is flexibility, speed, professionalism and consultation in dealing with problems. The current ‘business as usual’ model of managing our cities and towns is untenable if quality of life is to improve.

A government committee estimated that India needs `9.2 trillion (at 2010 prices) over two decades for basic infrastructure provisioning. There is, first, the challenge of finding the money. When and how it gets raised, we must ensure it is spent on infrastructure that makes our cities sustainable.

It is important for local governments to make up for their deficiencies by working closely with citizens to tap into fresh ideas and expertise. I have seen such initiatives deliver results across cities through the City Connect platform. (Disclosure: I was involved in catalysing them.) Three examples show that such public-private collaboration —  where private involvement is pro bono — can yield good outcomes for the city.

Pune City Connect decided to hire urban professionals on its rolls and lend them to the Municipal Corporation to address its human capacity challenges. The successful `200 crore bond issue was enabled by one such finance expert working closely with the corporation’s commissioner as they navigated the public bond issue with financial firms.

The new age Tender SURE roads, built around pedestrian and lifetime cost principles, is now a reality in Bengaluru with 50 km of roads under execution. This was evangelised by Bangalore City Connect which provided the design manual and the designs for the first seven roads and was implemented by the city’s corporation.

I would like to propose 10 gamechangers which can transform the way in which we think about and manage our cities and can, perhaps, save them from irreversible chaos.

Plan urban expansion sustainably: Developed countries face the challenge of a deteriorating inner city needing urban renewal while the suburbs tend to be planned in a more organised (though not necessarily appealing) manner. Many Indian cities experience uncontrolled expansion at their periphery with no overarching plans in place and weak administrative structures for plan clearances. Consequently, multiple projects materialise sans any concern for adequate road networks, connectivity, water, sewerage, and so on.

The regional authority needs to proactively intervene in planning the extended urban areas with environmental sustainability at the heart of its plans. This would typically involve an outline
plan for road networks, open spaces, services provisioning and, most important, respect for land contours, water bodies, forests, and the like, protected through a Regional Structure plan with clear ‘no development’ areas specified.

Fix civic problems with guidelines: City authorities tend to have an ad hoc approach to addressing the pressing problems of the moment. These are normally ‘band-aid approaches’ and the problems recur. The government needs to embrace sound guiding principles to address common civic woes. For instance, the government needs to invest in multiple modes of public transport, pedestrian facilities and motorable roads as its core focus to improve traffic flow. The emphasis must be on moving people, not vehicles. Unfortunately, most cities focus on catering to the rising demand of private vehicles which is unsustainable.

Further, governments need to give up their project obsession and adopt an outcome orientation. In resolving transport and traffic, this will result in setting up a Transport Authority to align all the agencies to a common goal. In a similar vein, garbage management needs segregation at source and decentralised waste handling and processing. One can lay out guiding principles for most civic problems that should guide government action.

Replace master plans with spatial plans: Existing planning frameworks for cities are land-use based master plans (static in nature), development control regulations (which are often violated) and have proved to be weak instruments to tackle the several challenges and needs of the city. Further, the current master planning exercise is unable to integrate activities across the various silos of government agencies be it water, sewerage, transport, energy or the  environment, nor effectively provide space for citizen participation. They are merely regulatory in nature, imposing conditions on plots, but are not proactive or action-oriented to serve the needs of an area or neighbourhood.

Plans need clear outcome goals around sustainable living indices. At the city level, identify key strategic projects and align agencies and city priorities to make it happen through inter-agency cooperation. At a decentralised level we need negotiated plans between elected representatives and citizens starting at the ward level and moving up the chain with zonal and corporation plans. The plans need to be updated on a regular basis based on changing dynamics and requirements of the city.

Design a city-region framework: If a city is to be liveable, its extended region must develop in a manner that reduces the pressure on the anchor cities. Else any incremental fix will lead to a further influx of people, resulting in deterioration of the quality of life. State government leaders tend to think in terms of satellite town development. It needs to go beyond just that. One envisions a ‘rurban’ (rural-urban continuum) area that encompasses six to eight other urban clusters within a region with the state being split into a set of contiguous regions.

The state will have a set of such regions, each with a major anchor city. The future lies in having ‘live and work’ clusters that are urban nodes within the regional network. Any two nodes in the network should have high-speed connectivity (rail and road) that allows travel (including airport access) within two hours. The political leadership and the system will need a huge mindset change since such a plan challenges all conventional thinking about jurisdictional boundaries, administration planning and more. The constitutionally mandated Metropolitan Planning Committee (MPC) should be the vehicle to manage the region.

Strengthen mayors: India’s urban governance is stricken by a weak and fragmented administrative structure in which elected municipal bodies operate with little autonomy from the state government. The one-year, titular, revolving mayor (as the post exists in many cities) is detrimental to the management of the municipal corporation and should certainly be done away with.

Our municipalities are yet to become vibrant institutions of self-government. There is an immediate need to institute urban governance reforms that provide for political, administrative and economic empowerment of our city governments. A five-year mayoral term with the mayor as the head of the corporation with a mayor’s council supported by the municipal commissioner is suggested. The mayors could be directly elected or be mayors-in-council elected by other councillors. City government empowerment is key.

Relook at archaic laws: Most cities in India are governed by a single Act for municipal corporations and a single State Town & Country Planning Act. And laws like Stage and Contract Carriage Acts are used to cement government monopoly on public transport, shutting out technological innovation. We need custom solutions (laws) to account for varied requirements across larger, mid-sized and smaller cities. A one-size-fits-all law will not work.

Reimagine governance, administration: Three-tier city governance and administration architecture is suggested for mega cities. Increased decentralisation at corporation and ward level and integration across multiple agencies across the city is necessary. The Greater City Municipal Authority (GCMA) headed by a directly elected city mayor needs to be the apex body at the city level which acts as a local planning authority and integrator/coordinator across corporations and parastatal agencies in the city space.

The city corporations  are part of the decentralised solution so that elected representatives are closer to their constituents. Ward committees need to be representative and strengthened for deeper decentralisation and citizen participation. Given the multiple civic agencies involved, coordination arrangements are necessary at the city level. There is also need for a City Finance Commission to ensure equitable finance is available across the multiple corporations.

The key focus needs to be on setting up a professional cadre of human resources with specialists manning tasks that need deep domain knowledge. Training of existing resources is necessary but this will take time and considerable effort. Lateral recruitments at senior levels with professional qualifications and experience is imperative if the overall mission is to succeed. A separate cadre of professional urban services professionals is an idea whose time has come.

Set up a City Economic Development Agency: Cities are engines of economic growth. The global practice is to have a city-level Economic Development Agency as a Special Purpose Vehicle (SPV) in a public-private partnership. It draws on the private sector’s know-how to attract investment and is assisted by the government at the backend. Economic development is about knowledge and skill-enhancing; it builds long-term assets.  Providing basic services can be a tremendous economic development opportunity. The informal economy has high growth and development potential and must be encouraged for inclusivity.

There are multiple ways to facilitate land procurement for public purposes — town planning schemes, land pooling schemes, notified areas scheme, transfer of development rights, cluster development and joint development are some of them. An optimum hybrid mix needs to be evolved, based on local conditions.

These 10 points are not necessarily an exhaustive set of solutions to solve our urban conundrum. But they represent ideas that have not been tried in any meaningful manner across the country. Some can be addressed in the immediate short term and others will take much longer and face political obstacles in execution. Meanwhile, urban woes continue to mount daily. It’s time to act now!

V. Ravichandar is a self-described civic evangelist who has engaged with urban issues for nearly two decades on a pro bono basis