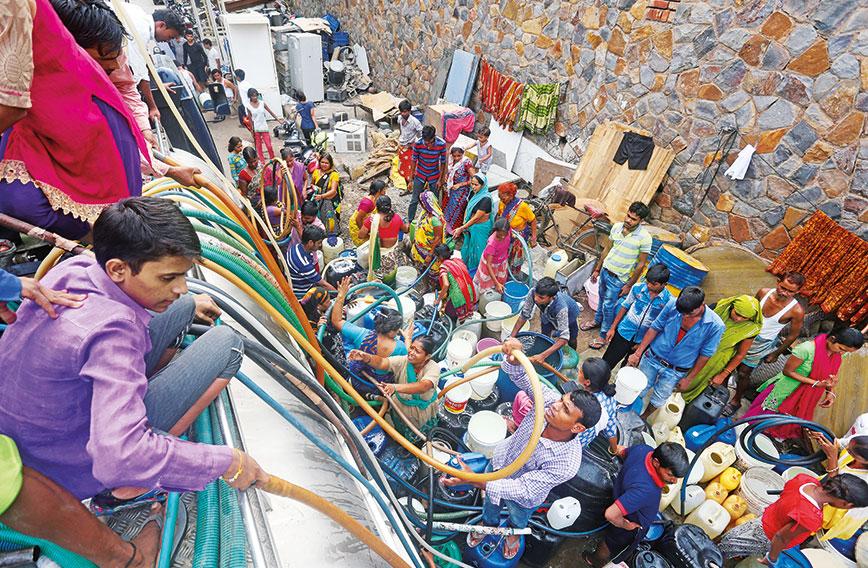 Cities have enough water, they just don’t see it 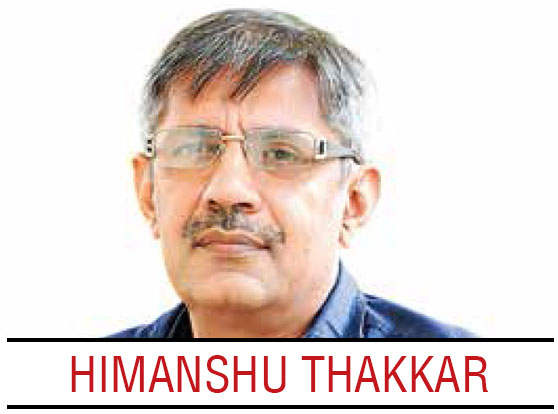 The great Mughal ruler, Akbar, built the city of Fatehpur Sikri in the 16th century to be his new capital. Within 13 years, he abandoned it. The reason? Lack of water. It’s a story that the late Anupam Mishra often cited, saying, “Let us not be as foolish as Akbar!”

At the end of his TED talk in 2009 on Rajasthan’s marvellous water-harvesting structures, Anupamji received a standing ovation. He was then asked the relevance of those structures today. With his characteristic clarity, he replied, They teach us to use our local resources wisely. ‘Harvest the rain that falls’ is the principal lesson we learn that is relevant even today. And please don’t insult everyone by saying that even dams like the Sardar Sarovar harvest rainwater!

Recently, the Government of India (GoI) think tank, NITI Aayog, came out with a rather dire
water management report, warning that India is now suffering its worst-ever water crisis and it is going to get yet worse. That warning is timely and apt, although the report suffers from flaws relating to what it includes and excludes in deciding its Composite Water Management Index for various states.

The NITI Aayog report has not properly emphasised either rain or rivers. Regarding rain, the report asks the states: “Whether the state has any framework for rainwater harvesting in public and private buildings?” If yes, you get full marks; if no, you get zero! So 20 of the 22 states that reported on this got full marks.

No questions were asked about actual implementation!

The report says in three different places that at least 21 cities will have no groundwater by 2020, though all are based on media reports! Comparing the NITI Aayog report to the United States Geological Survey (USGS) report, which came out in the same week, shows how inadequate the former is.

Possibly, the NITI Aayog wanted to warn India of a Cape Town Zero Water day scenario. But its  warning won’t work since it isn’t backed by any credible research. Besides, as we saw in the case of Shimla, we don’t get any warning until the crisis is upon us. By the time we get to know, we are already in a soup since the water is over. And even then it’s the high court that has to step in to give directions to the state government.

Himachal Pradesh Chief Minister Jai Ram Thakur was busy advocating a long-distance, high-energy and capital-intensive water scheme based on the Kol Dam on the Sutlej river, that the World Bank was also pushing. He was not interested in looking at harnessing local resources such as rainwater and local streams by implementing catchment protection for streams, ensuring treatment of sewage through decentralised Sewage Treatment Plants (STPs), taking demand-side management measures, reducing losses and stopping unjustified water use.

But Thakur is not alone. Most chief ministers and city managers are looking for the same easy, lazy, unsustainable, expensive and destructive options. Delhi, Mumbai, Bengaluru, Chennai, Hyderabad, Ahmedabad, Indore, Bhopal… every city looks for the same kind of long-distance, costly options that have massive impacts and cause conflicts. The Mumbai Metropolitan Region (MMR), in fact, wants a river link, namely, the Damanganga-Pinjal river link, at the cost of tribals, forests and the environment, when it has 2,400 mm of rainfall that it won’t harvest, nor treat its sewage to recycle it.

In 2014, SANDRP released a report, “Dams in Tribal Belt of Western Ghats for the Mumbai Metropolitan Region”, asking if the MMR really needed more of these dams. The then Mumbai commissioner did tell NDTV in response to our report at the time that, indeed, Mumbai did not need any of these over-a-dozen new dams being proposed. But the current state government, that came to power on the bandwagon of Maharashtra’s massive ‘Dam Scam’, is now pushing those same scam-ridden projects, egged on by the investment-focused Union Water Minister Nitin Gadkari.

The recent campaign in Delhi to save thousands of trees for infrastructure is very good news. But Delhiites also need to say that their city  does not need the Renuka, Kishau or Lakhwar Vyasi Dams on the Yamuna or the Sharda-Yamuna river link. Delhi’s then water minister, Kapil Misra, did say so at the inauguration of the biannual India Rivers Week in November 2016, but his government is yet to endorse that statement as its consistent official stand.

Bengaluru, as water activist S.Vishwanath argues, does not have to depend on water drawn externally “if it chooses to”. Bengaluru receives around 3,000 million litres of rainfall every day on average and it draws 1,350 million litres externally per day. “So, even if we manage to harvest half the rainfall, we would be able to meet the city’s need,” he says. He has launched a million wells’ recharging scheme in Bengaluru to make the city water-sufficient.

It is clear that India’s urban water footprint is increasing in multiple ways. Rapid urbanisation, predicted by experts, is just unfolding and per capita demand is going up. Cities are also generating sewage equal to 80 percent of the water they consume.

City water managers are looking at big storages for dependable supplies of water, mostly far away from cities. Such storage created behind big dams has huge social and environmental impacts, besides massive economic costs and increased disaster risks. There is competition for water allocation from such sources, which are either existing, under-construction or to be constructed. Allocations for cities at a considerable distance thus creates conflicts and can cause potential disruption in water supply — as Delhi frequently faces, including in the summer of 2018.

It’s not just in arid areas that cities are looking for long-distance water sources. It’s happening in high rainfall cities like Mumbai too. Not one city in India is able to treat even half the sewage it generates. Not even the national capital. This mostly untreated sewage is polluting rivers and even groundwater in many places.

Usually, cities are unable to cater to the water demand so many people end up using groundwater through their own bore wells or indirectly through tankers who typically source their water from groundwater — mostly on the fringes of the city.

Alongside, cities cover up or concretise open spaces, destroy local water bodies and nearby forests. For example, the Delhi Ridge or Yamuna floodplain; in Mumbai, the city’s mangroves, the Sanjay Gandhi National Park or the Mithi and other rivers; in Bengaluru, the lakes; and in Kolkata the East Kolkata wetlands.

The combined effect of groundwater overuse, concretisation and destruction of forests leads to depletion of groundwater levels, depriving water-scarce settlements of a fallback mechanism during times of water scarcity. Groundwater depletion can have wider implications on surrounding areas and rivers flowing through cities.

The neglect and deterioration of wetlands, lakes, water bodies, and floodplains, concretising of surfaces, reducing water percolation, encroachment, and silting and non-maintenance of the drainage system, reduction in flood-carrying capacity of rivers in cities, and the impact of climate change means that the frequency of such crises is likely to increase in the coming years.

The proposal that riverfront development, like what has been done for the Sabarmati in Gujarat, is the solution for urban rivers is clearly misleading and misconceived. The Sabarmati has not been cleaned or rejuvenated. Its pollution has merely been transferred downstream of the city. Concrete channels have killed the Sabarmati as a river. What is left is just a concrete channel, not a river. The water that is seen in this channel in Ahmedabad
is not Sabarmati water but Narmada water, to which the city of Ahmedabad has no right. The encroachment of the riverbed and floodplain for real estate development is clearly an invitation to disaster. Globally, society is moving towards giving rivers more room. Reviving rivers is not a luxury. It is essential and possible to rejuvenate our rivers.

Even a city like Pune with at least five rivers flowing through it is considered hugely vulnerable to floods because all its rivers are facing silting, drainage congestion, pollution and encroachment — significantly, by the government despite repeated judicial orders.

At a recent meeting in Pune, participants emphasised that India urgently needs a National Urban Water policy that would guide our cities to manage different aspects of their urban water components in an optimal way. India’s National Water Policy of 2012 is clearly unable to play that role, because it lacks necessary content. We need a policy that focuses on various aspects of the urban water sector and helps to meet current and future challenges.

The 'Twelfth Five Year Plan Working Group Report on Urban Water' correctly said in 2011 that rainwater, local water bodies, rivers, groundwater aquifers and treated sewage are key resources that need to be exhausted before any external long-distance water option is considered. In this range of components, reduction of transmission and distribution losses, disallowing unjustifiable and unnecessary water-intensive activities and demand-side management measures will also play a key role. Alongside, there is need to educate policymakers and  decision-makers, including ministers and bureaucrats, that freshwater supply is limited, since a lot of people seem to believe and behave as if it is unlimited.

A key component of a Smart Urban Water Policy would be participatory, transparent, accountable governance and the right to water. The public health cost of the water pollution that cities create and leave untreated is unaccounted, massive and unacceptable. It is invariably borne by the poorest. Unfortunately,  those responsible get away as if discharge of untreated sewage and its implied costs are normal and nothing to worry about.

It is clear from the experience of the past over four decades that the prevalent option of having massive, centralised STPs is not working. We have better options: decentralised sewage treatment and eco-friendly options such as bioremediation, constructed wetlands and in-situ treatment. Such options are not only low-cost, low-capital and land-intensive, but also help make recycling of treated sewage feasible.

The GoI has a Smart City programme with massive investments. One expected it to define a Water Smart City and come up with a National Urban Water policy that would provide a roadmap for cities to become water-smart. But the Smart City programme has no such norms or policies. The cities included in it are unlikely to become examples of a water-smart city. It is not particularly smart to underestimate or ignore the cost of this policy vacuum that our urban water sector operates in.

Himanshu Thakkar is with the South Asia Network on Dams, Rivers  and People