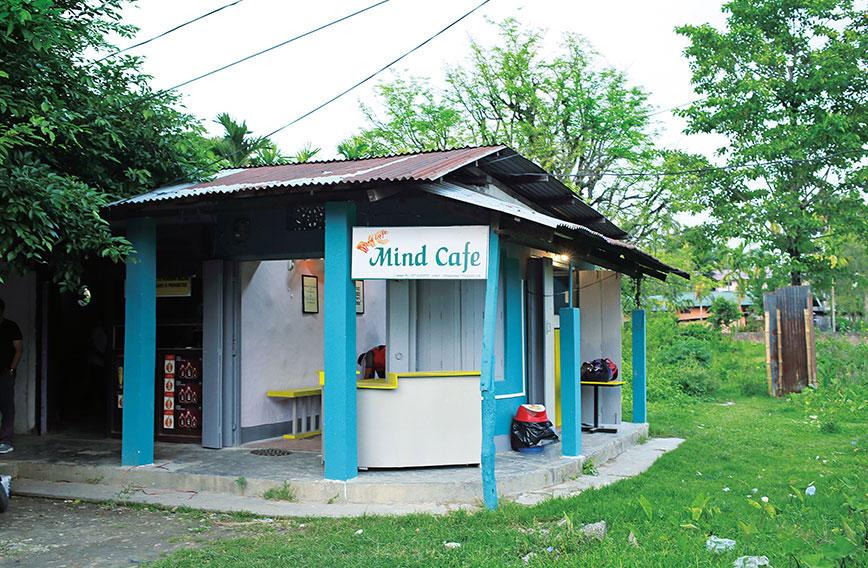 15 years and a new menu every month

When we are asked to talk about our magazine, which is more often these days than in the early years, we sometimes compare ourselves to a gourmet restaurant with original recipes and faithful customers coming back for more.

To be small and accountable and free of mega ambitions is a welcome return to basics in times when we are besieged  by fake news and fictional  ‘likes’ and ‘views’ on the Internet, not to speak of doubtful numbers for TV viewership and print circulations.

Civil Society was dreamed up in the belief that small media is needed to drive new ideas and look at our  world differently. If journalists could revise their notions of size and reach, they could gift themselves the freedom to do meaningful and engaging stories and thereby be more useful to society.

The ‘gourmet approach’ calls for  innovation, quality and integrity. For skilled journalists it is an opportunity to refurbish the standards of our profession in much the same way as a passionate chef raises the bar for good cooking.

In 2003, when we began, we could see the civil society space emerging in an impactful way. Agents of change, in NGOs, businesses and government too, were coming forward to fill gaps in the country’s development. As journalists we felt drawn to telling these stories using our big-media skills and created a magazine which sought to be lively and anecdotal in style and visually powerful. It was decided that we would look at problems but focus on solutions. Our search would be for what was working and why.

We decided to celebrate change and the lives of people making it happen. We wouldn’t ignore what was wrong and the many inequalities that existed around us, but we wouldn’t dwell on them because enough was already known about them and there was little that we could add. Instead, we chose to put our energies and our extremely limited material resources (think money) into examining ideas and initiatives that were delivering results or had the potential to do so. If written up simply and packaged attractively they could be easily shared. Going forward, such ideas and initiatives could perhaps be emulated, adapted and scaled up.

It concerned us that as India went through economic liberalisation, our lives had come to be shaped by information that flowed from a few chosen sources. There was less and less that journalists were telling India about India. Success was being narrowly defined. Achievers were of a kind. Anyone outside this circle had, for all practical purposes, ceased to exist. We were of the view that as a country we were closing our options and becoming less competitive. Managements in big media houses preferred to conform and opted for the tailored look. Readers got what advertisers wanted. Elsewhere in society — outside the media — only a few chosen and predictable positions prevailed. You either had to be ‘this’ or ‘that’. If you weren’t on TV or on a few editorial pages you counted for nothing.

But democracy is strengthened by small voices and efforts. Journalists are needed to capture them so that they don’t go unheard. We felt we should step out and lead by example. In the past 15 years, appearing as we have month after month without missing a deadline, we have produced a few thousand stories which might never have been otherwise written. The faces on our covers are those that would never had made it into print. The people we get to are mostly surprised that we want to spend time with them and publish their stories.

We are delighted to have been able to do this. Our journalism has taken us to the furthest corners of the country and, through this magazine, the most improbable of connections have been made between rich and poor, empowered and powerless.

An example is the Mind Cafe, pictured here, and to which you are cordially invited. We found the Mind Cafe in Tezpur. And what were we doing in Tezpur? We were there to check out a certain Dr Nilesh Mohite, who at 32 is a young psychiatrist and a Maharashtrian, but instead of pursuing a career in a big city like Mumbai with wealthy patients, he works among tribal people of Assam. Two of Dr Mohite’s patients, both young women and suffering from schizophrenia, supervise the cafe, which is the sum total of a few tables with coffee and tea and Maharashtrian snacks on offer.

Dr Mohite hopes that at the Mind Cafe mental illness will come out in the open, be  discussed in daily interactions and finally lose some of its stigma. It is a tiny initiative but important nevertheless. Tezpur has a mental health hospital and college and yet large numbers of poor tribal people go unserved for want of psychiatrists. It gives us some idea of the huge challenges in public health that India faces and has hardly begun to address.

Dr Mohite has joined Dr Sunil Kaul, who for the past 18 years has led the Action Northeast Trust or Ant. Among other wonderful initiatives, Dr Kaul has for the past 10 years  run a mental health camp in the remote and strife-torn Chirang district where Bodo tribes have been seeking a homeland. Dr Kaul, who is a general physician, has bravely kept the camp going without a psychiatrist. Dr Mohite is the psychiatrist he has been looking for.

Ant and Dr Mohite are in this year’s Civil Society Hall of Fame whereby we celebrate ordinary Indians trying to make a difference. Others in the Hall of Fame are Dr Prakash Vinjamuri and his wife Dr S.V. Kameswari from Telangana, Dr Jogesh Kumar from Rajasthan, and two agricultural scientists from Kerala, Dr C.R. Elsy and Dr Prasanna Rajendran. The five are profiled in this issue.

Dr Vinjamuri and Dr Kameswari have, for the past 18 years, been campaigning in rural Andhra Pradesh/Telangana against the widespread medical malpractice of conducting hysterectomies when they are not needed, especially in young women for whom it means being condemned to early menopause. The couple go from village to village (for many years on their own and now with the support of the Telangana government) explaining to rural women the importance of the uterus and why its removal is justified only in very few circumstances.

At the other end of the country, in Rajasthan, Dr Jogesh Kumar has transformed a primary health centre (PHC) of the government at Gida in a remote corner of Barmer district. He was sent there five years ago on his first posting and found the PHC in a state of collapse. Today it is a shining example of what state-run healthcare can be like. Such is the demand for quality healthcare that Dr Jogesh is a local hero.

We found Dr C.R. Elsy and Dr Prasanna Rajendran in Kerala. Both have featured in our magazine before becoming entrants to the Civil Society Hall of Fame. They are examples of what agricultural scientists working in the government can achieve for farmers through vision and persistence.

Dr Elsy, who heads the Intellectual Property Rights (IPR) Cell in Kerala Agricultural University,  has worked with just a couple of young assistants to help farmers get Geographical Indication (GI) status for eight unique crop varieties such as the much loved Chengalikodan banana, Pokkali and Kaippad rice and the Vazhakulam pineapple. In the pipeline are Marayoor jaggery, the Kuttiyattoor mango and others.

Dr Rajendran has brought about sweeping changes at the agriculture research stations in  Malappuram and Wayanad. Both were beset with the problems that afflict government facilities. Dr Rajendran has transformed their work culture and made them generate revenue. With a young team of professionals, he has reached out to farmers to extend agricultural services and has created livelihood opportunities.

At Wayanad, Dr Rajendran has successfully started a flower show which generates almost Rs 1 crore in entry ticket sales from thousands of visitors. Wayanad has now been declared a ‘Special Floriculture Zone’. Under him, the agriculture research station has done extensive water harvesting and taught farmers as well.

Agriculture and healthcare are burning issues of the day. Seminars and conferences have experts wrestling with solutions. Theoretical frameworks and policies are important but there can be no substitute for action. Many of the bigger solutions we need are to be found at local level where purposefulness and pragmatism deliver results.

The Civil Hall of Society Hall of Fame has completed eight years. It is perhaps the most perfect expression of our magazine’s slogan: ‘Everyone is Someone’. It reaches out to thoe who are routinely overlooked. The exceptional people who are this year’s entrants should be feted and consulted for the valuable experience they have and the bigger role they can play in taking India forward.

Our partner for the Civil Society Hall of Fame since its inception has been the Azim Premji Foundation. We also have a wonderful jury:  Dr R. A Mashelkar, Aruna Roy, Nasser Munjee, Harivansh, Dr D.P.S. Toor, Vir Chopra, Gautam Vohra and Darshan Shankar. They are each public spirited individuals who have had a long and affectionate association with our magazine.

In addition to the Civil Society Hall of Fame we have in this issue 16 special articles by on the voluntary sector. The contributors come from diffrent walks of life. They come from government and industry and the social sector itself. So much has happened in the past 15 years that it is difficult to be comprehensive. We’ve settled for an eclectic collection of articles well aware of the fact that some areas haven’t been covered.

We are especially touched by these writers, all busy people, setting aside time to pen serious and insightful pieces for this anniversary issue. And delivering on time too! Together they make a rare collection.

Making a magazine like Civil Society sustainable takes time and even with 15 years under our belt it isn’t easy. We remain always inches away from business failure. But we measure success in innumerable ways. It gives us great satisfaction to have paying subscribers and advertisers who see merit in our mission. The advertisers have been persuaded by us to go beyond mere numbers and put a value to original journalism. It is great that decision makers in companies have gone the extra mile for us.

Journalism for us is all about connecting with people — those whom we write on and those who read us. We draw our strength from both. It has taken time but Civil Society has grown into a large community. In an old fashioned way it is a business that goes beyond commercial considerations to take journalism back to its social moorings.

Being small and under-capitalised has been a strength because it has forced us to be alert and inventive at all times. But the lack of money has also been frustrating and prevented us from hiring,  increasing coverage, shooting  videos, marketing ourselves more widely and so on. Yet, when we weigh it all up and ask ourselves whether it has been worth it, the answer is yes.