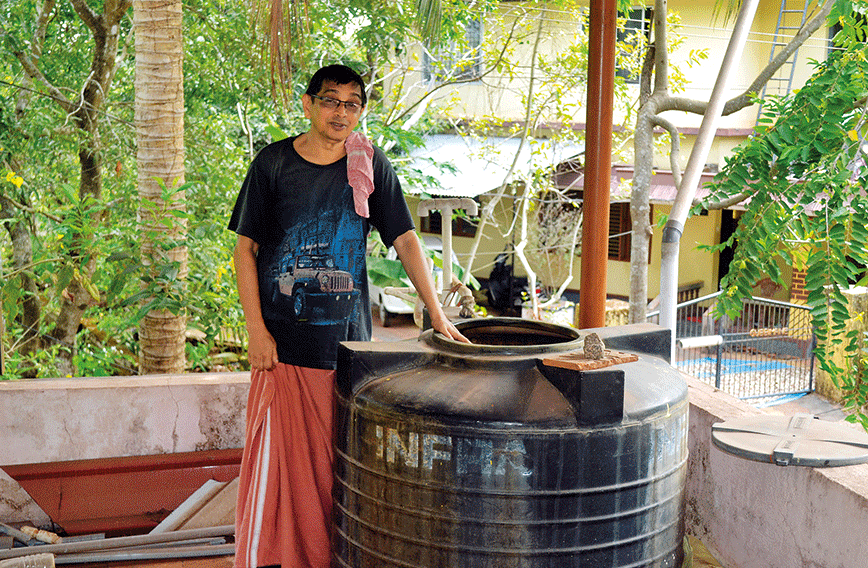 C.N. Shastry with his tank in which he stores piped water | Photograph by Shree Padre

In Dhanvanthari Nagar, 14 houses have worked out an exemplary water system, worthy of emulation. They source water from one bore well and use it with care. Every family gets an equal amount of water at a nominal price. This system of sharing and caring has built cordial relations within the community. And they are all very proud of their water management system.

Dhanvanthari Nagar is in the suburbs of Kasaragod. Before the monsoon broke, there was drought in Kerala. But these families faced no water shortage. They got their quota of 1,000 litres every day for 15 minutes through their pipeline in their compounds.

Dr U. Maheshwari, a retired professor, recalls vividly how the idea of sharing water started. The late Ravikumar, his neighbour, had started digging a bore well in his compound. When neighbours saw the drilling truck arrive, they rushed to his house. They pleaded with Ravikumar not to dig a bore well for himself. “Let us dig a common bore well nearby and share the water equitably,” they suggested.

Ravikumar agreed. That’s how the Dhanvanthari Nagar Development Society (DDS) was formed to share water in 1997. The families living here jointly bought two cents of land for the bore well and constructed a pump house.

“All of us were worried that if each one of us started digging a separate bore well, a water competition would begin and affect cordial relations,” says Dr Maheshwari.

Out of 14 families, 10 have open wells. But this year, just two bore wells yielded water till the end of summer. The rest had dried up.

All the houses are connected via a pipeline to the bore well. Each pipeline has a gate valve near every house. Residents open the valve at a stipulated time and fill up their water tanks.

The DDS has a governing committee to oversee water management. Every year they elect a president, a secretary and a treasurer. Each house is represented by two members. A general body meeting is held once a year. Rules have been framed and are displayed in the pump house.

The 14 houses are divided into four sections. There is a fixed time table for water supply. The first resident on the pipeline’s journey fills water by opening the valve for 15 minutes and then intimates the next house. After all the residents have received water, the pump is switched off. “We really don’t measure the water. There may be slight variations in water pressure too because the houses are at different elevations,” says C.N. Shastry, a retired professional.

Adjustments are made if there is a power cut.  If a family is on holiday, they can ask one of their neighbours to fill up their tank while they are away. But they can’t get more water to make up for the days they were not at home. “If one of us goes out to attend a family function we request our neighbours to help,” says Shastry. But households can get more water if they are celebrating an occasion or holding a function.

There are two categories of bore well water users — those who use the water throughout the year and those who access it for six months. Some families have an open well. They draw water from December to May. Initially, there was a three-month category but that was subsequently cancelled.

Residents of this colony are a well-educated group. They comprise professors, lecturers, bank managers, advocates and senior professionals. When Dhanvanthari Nagar was established, only five or six families lived here. That number increased to 14.

Dhanvanthari Nagar is situated on a lateritic hill top near Uliyathadka, a small town. Houses in the colony are built in a haphazard way and sizes of plots vary from nine cents to 36 cents. Each house in the vicinity has a bore well. A few families with open wells have a bore well too, just in case their open well turns dry.

Residents bought land from a single landowner. He assessed each buyer’s background carefully before selling, says Shastry. “Although we became neighbours by chance, some of us knew each other for many years. For example, four of us worked in the same college,” says Dr Radhakrishna N. Bellur, a professor.

Surprisingly, the colony doesn’t have a residents welfare association (RWA). The DDS is their only grouping. They have extended their pump house and added a meeting room where social events are held.

The initial group of residents pooled Rs 5,000 each to set up the infrastructure of their water system: land, bore well, pump house, pipeline, and so on. The families who arrived later paid a higher fee, decided by the committee. Currently, each family pays just Rs 50 as maintenance fee.

The first settler here was Dr Kamalaksha K., secretary of the DDS and a retired principal. “From the start we consciously opted for traditional open wells and not bore wells. We realised that the bore well culture would result in competition between neighbours and end up in excessive use of water.”

So far things are running smoothly. “The biggest advantage is that our relations are cordial and you can see it reflected in our pleasant smiles. Water isn’t a cause of friction,” says Dr Kamalaksha K.

There could be some trouble brewing, though. “The system has worked satisfactorily so far,” says Ganesh Prasad P., a government officer, with a sigh of relief. “But, of late, the daily routine of directing water to the tanks of some members at a particular time seems inconvenient for them. We don’t know how long things will continue to work smoothly.”

Most residents travel for work. Water is released in the morning or evening. If a family misses their turn, they have to wait until water has been distributed to the other families or for a lean period in between.

Recently, some new residents wanted to join the water sharing system but the DDS turned down their request because they aren’t sure how much water they can spare. Six more families have now settled in the vicinity and they have dug four bore wells.

A member of the DDS too has dug a bore well in his compound. Other members point out that “there was an unwritten understanding that we shouldn’t dig independent bore wells”. But the member says he is very elderly and can’t stick to a fixed water time table.

A few families who live here are tenants. They would probably be disinterested in water conservation activities. Old-time residents are also apprehensive of an areca nut garden that has come up in the vicinity. It might pump up a considerable quantity of water, they fear.

Dr Bellur, Dr Kamalaksha K. and Shastry have also carried out water recharging measures in their respective compounds. This has helped them too. Unfortunately, this example of in situ groundwater recharge is not being emulated by other families.

Such a system of bore well sharing is unusual. It could be replicated across the state. Residents are deriving many indirect benefits from it.

“If we had dug a separate bore well, we would have ended up spending `1 lakh each and there would have been no guarantee of a dedicated supply. Now we know the quantity of water we get is limited, so we use minimum water,” says Dr Bellur.

Individual bore wells would have dried open wells in the colony a long time ago. Sharing and caring for water has helped residents retain a reasonably high water table at a time when groundwater is depleting all over the state.