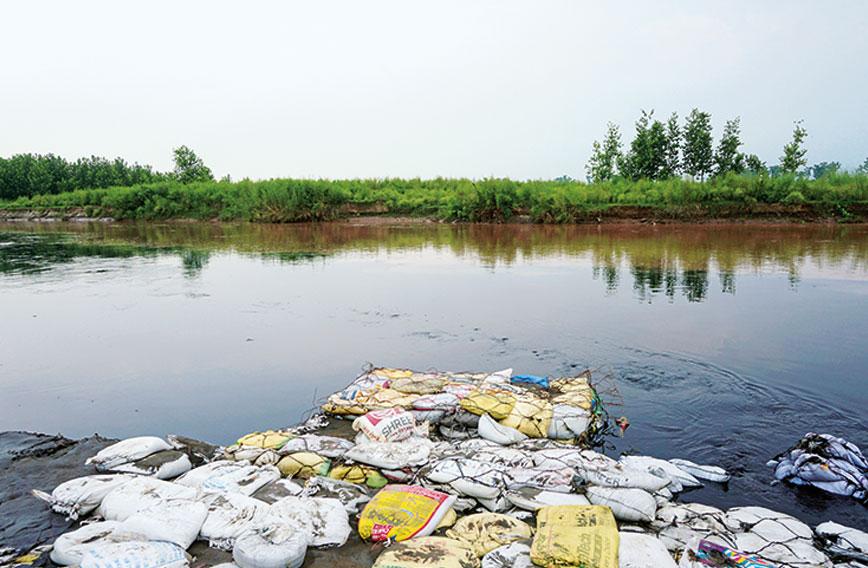 The Budda Nala continues to be a receptacle for chemical wastes, sewage, dairy effluents and garbage.

Ludhiana's curse on the Budda Nala

IT is a bustling industrial centre hardwired for making money. Known for its mills and exporters, it is not uncommon to find a Ferrari or Bentley inching along on its crowded streets. A civic movement is the last thing you would expect in Ludhiana, but in the past couple of years socially conscious citizens have been trying valiantly to be heard amidst the commercial hurly-burly of the city.

Their big concern is the Budda Nala that flows for 14 km through the city and then goes on to join the Sutlej. As it passes through, it becomes the receptacle for chemical wastes, sewage, dairy effluents and garbage.

The nala turns black and is an embarrassment for Ludhiana, but more significantly the pollution that goes into the nala compromises the quality of water in the Sutlej, one of Punjab’s principal rivers, which it joins after it leaves the city.

The Sutlej is a source of drinking water for some 10 million people further downstream in Punjab and Rajasthan. Ludhiana’s reckless dumping of wastes is therefore creating a health hazard on a much larger scale.

The sources of pollution are textile mills, dairies and the city’s sewers. As the contamination of the nala has grown, concerned citizens have come together to find a solution.

They have been talking to the mill managements and dairies and petitioning the state government in Chandigarh but the path for them is not just steep, it is also tricky.

Just when they seem to have made some headway, thanks to the National Green Tribunal, they realize entrenched interests have actually run rings around them.

For instance, a `600-crore plan for channelizing and treating wastes has been passed, but its details weren’t shared with the public. Instead, it was posted online among other government tenders.

Says Jaskirat Singh, a software engineer who has played a key role in raising objections: “It is a 500-page document and there is very little discussion on water and water quality. It is entirely focused on the civil work: cement quality, iron quality and so on. So, I told them that this is a drinking water problem, this is an environment problem, this is not a civil engineering problem.”

He was also aghast to find that the whole project was supposed to be headed by a civil engineer with 10 years’ experience. “It is still so. I suggested that some environmental scientist or water scientist or a public health specialist should head this project,” says Singh.

He adds: “We told them the biggest problem is that industry waste and domestic waste is getting mixed up. And that is mixing up the accountability of  the Ludhiana municipality and the pollution control board with neither wanting to be held accountable. That cannot continue because that has been the root of the problem. But they have again created a big sewage treatment plant (STP), which will cost about `250 crore.”

The plan says that 20 percent of the STP’s capacity will be for handling industrial waste, which Singh says is wrong. The costs of maintaining and running the STP will be borne by the municipal corporation, using taxpayers’ money. Also, the previous STP got damaged because of chemicals in industrial waste.

Singh laments the attitude of industry. Units want to remain where they are, scattered all over the city, when it would be much better if they were put in three clusters and their wastes were treated at source. It is the same problem with dairies, which don’t want to be relocated or invest in treatment facilities.

The Budda Nala is actually fine till it enters Ludhiana. In fact, its flow is lean for 14 km before entering the city since it serves canals along the way. The problem begins in Ludhiana where the flow swells, but with sewage and chemicals.

Interestingly, Ludhiana does not depend on the Budda Nala. It draws its drinking water from underground. The nala could contaminate aquifers but most people live at a distance from the nala. The people who live near it are poor and don’t count for much.

“In Ludhiana we use underground water. We have plenty of it with the Himalayas giving us a lot of mineral water. We are using our underground aquifers. We are creating polluted water out of that and we are throwing it into the river and that water we’re sending across to our brothers and sisters in other cities for them to drink. We are a bunch of fools, actually,” says Singh in exasperation.

It is perhaps not the only example of short-sighted governance in Ludhiana. When Tirupur in Tamil Nadu brought in regulation to get dyeing units to clean up their act, some of the production shifted to Ludhiana where the rules were lax, says Singh.

Singh says there have been efforts to bring all stakeholders on one platform, but it isn’t easy. “You know, everyone is too selfish, I think. Nobody wants to change themselves. Everyone wants the other guy to change,” he says.