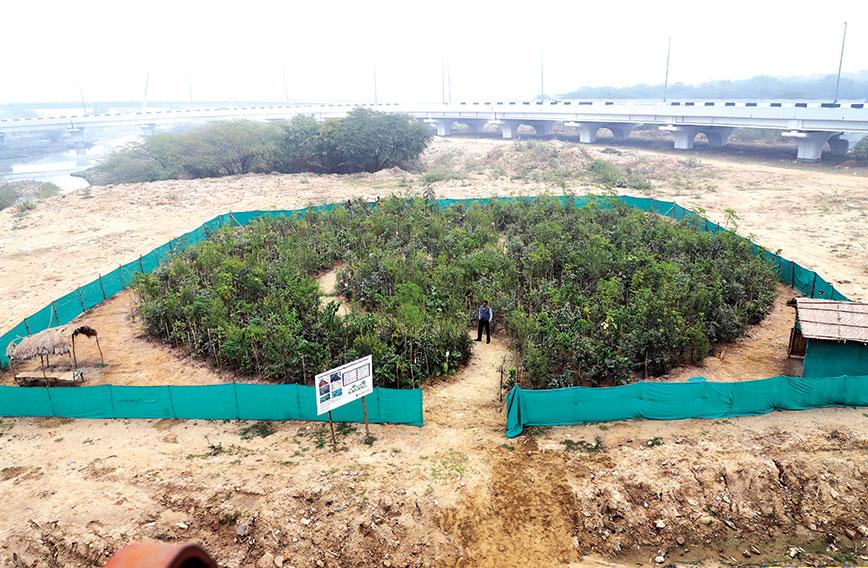 A miniature natural forest is coming up on the floodplains of the polluted Yamuna river in Delhi. The saplings planted are indigenous to the region of Delhi. You can see the forest growing on a drained swamp behind the Sun Dial Park in Sarai Kale Khan in southeast Delhi.

This forest of 700 square metres is being raised by Afforestt, a for-profit venture which grows forests in just three years. It uses a method developed by Dr Akira Miyawaki, a famed Japanese botanist.

The forest is part of a larger effort by the Department of Biotechnology (DoB) to clean up the Barapullah, a drain which carries 30 percent of Delhi’s sewage and disgorges it into the Yamuna. Historically, though, Barapullah was a creek which carried rainwater into the river. It was part of Delhi’s complex web of rainwater harvesting systems. DoB invited Afforestt to help convert this marshland of sewage into an urban forest.

Afforestt began by draining and cleaning the swamp created by the Barapullah. The saplings, which were planted in July 2018, are now around six feet high and on their way to greening a small part of the floodplains of the Yamuna.

After clearing the area, Afforestt began the work of preparing the soil. It enriched the soil using shredded straw, husk and manure mixed together. The species of saplings were chosen carefully. Afforestt’s process is to first understand the kinds of trees, plants and shrubs that should be grown. “We do a study of what was growing here naturally in the past before the area got degraded. We try to identify the species that disappeared from the local ecosystem,” says Sunny Verma, executive director of Afforestt.

Afforestt then quantifies the number of plants that will be assigned to different species in different layers of the forest.  For instance, what should be the ratio of the shrub layer, the tall tree layer, the fast-growing species and the slow-growing ones.

The smaller trees that have been planted are white mulberry or shahtoot, drumstick, Indian date, khair or Red Cutch. The next layer of trees are Indian gum Arabic, ardu, siras and  amaltash. The canopy trees are kadamb, banyan, fig, desi mango and bahega.

After preparing the soil, the saplings are planted and mulch placed on top. In the first year of growth, the plants need to be watered once a week.  “Everything else nature will do,” says Verma confidently.

Dr Miyawaki discovered that if trees and plants are grown exactly as they existed minus any human interference, they show remarkable ecological resilience. In Delhi, this is not easy to bring about. Verma says that several indigenous species have simply vanished. He points to a coppice of trees some distance away, “Those are Mexican trees,” he says. “The city is full of all kinds of invasive species.”

He says that Afforestt’s idea is to create a dense forest that stays forever. Most natural forests have dense patches which are difficult to get through and where even sunlight doesn’t get a chance to penetrate. Afforestt designs their forests so that after some initial care, they too can grow densely.

But natural forests aren’t static either. “There is a lot of competition and natural selection that happens as these forests grow,” says Verma. Some saplings will survive and others may not. But they will fulfil a certain ecological function.

“This is a drumstick tree. It will stay for seven or eight years because that’s the life of this tree. But as soon as it dies it will create space for other species. Most man-made forests take 10 years to mature. And then we hope they will begin to spread. Our forests grow rapidly in three years and spread =on their own.” Afforestt also ensures that their young forests are kept free of weeds and invasive foreign species. 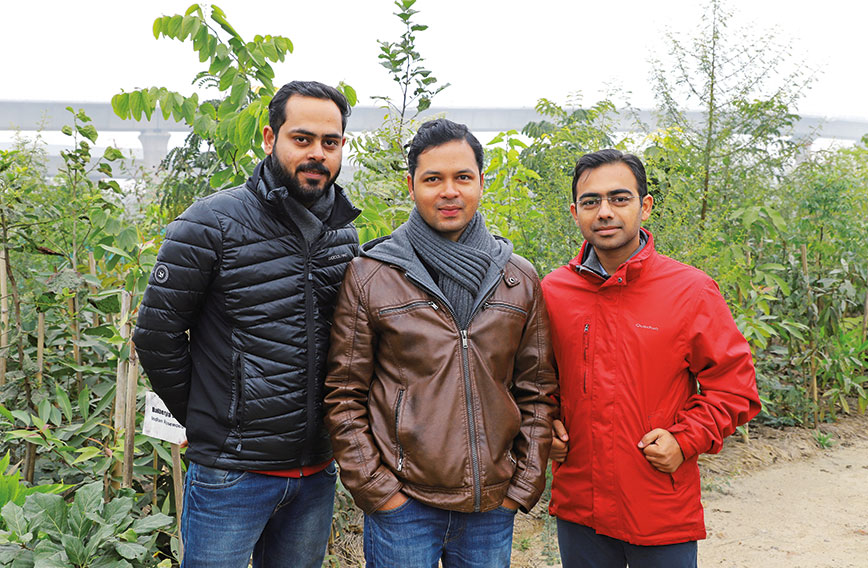 Most of Afforestt’s clients are companies like L&T, Samsonite, and Saint-Gobain that like to raise small forests near their manufacturing units. People with large holdings also contact them. Afforestt also grows forests for small homeowners. The smallest patch they grew a forest on was just 100-150 square metres.

Afforestt has attracted the attention of state governments. They are partnering the West Bengal government in skilling workers to raise forests under the Mahatma Gandhi National Rural Employment Guarantee Scheme (MGNREGS).  “We can train people in our methods. It is a skill. The aim is to train local people and help them create patches of forests in their villages under MGNREGA,” says Verma. Afforestt generally uses machinery and less labour while working with corporate clients. But for the MGNREGS tie-up with the West Bengal government they will ensure more workers are employed.

Afforestt will be working with the Maharashtra government which is keen to plant some 500,000 trees this year. It has also picked up forest-planting projects for the Chennai Metro authorities and the Bengaluru airport.

Afforestt claims that 98 percent of the species it plants survive. The forest department’s survival rate is a mere 10 percent, says Verma.

“We plant indigenous species. The forest department plants species that require a lot of care. Secondly, the combination and density of our saplings work really well,” says Verma. “We understand that the forest is a connected system. There is a web underground connecting all species. What is important is to ensure that a cycle of nutrients is maintained.”

Afforestt is also happy to share its expertise and methods. You can download the entire Miyawaki system from their website. “We document all our work across states and even abroad and share it with people. If you want to know which family of species grows well together, you can get that information from us,” says Verma.