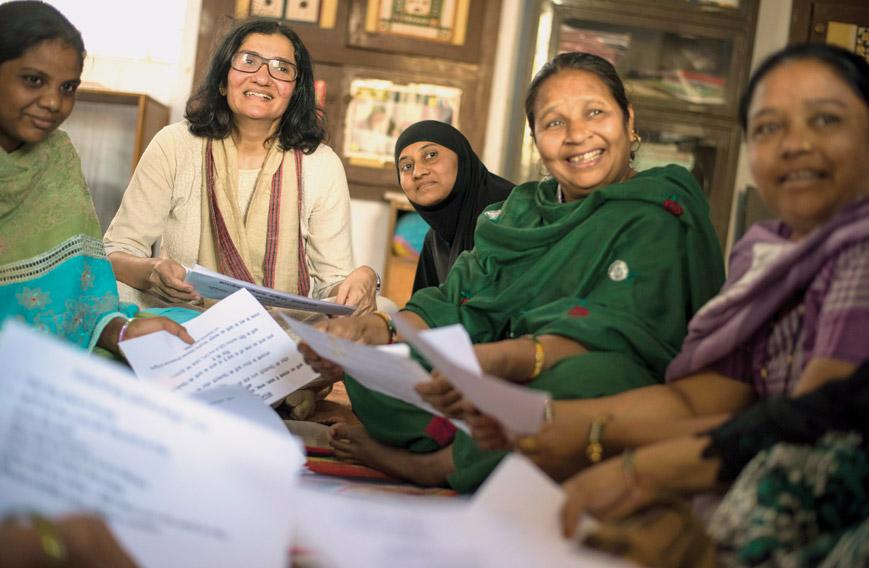 Zakia Soman is a co-founder of the Bharatiya Muslim Mahila Andolan (BMMA), which is leading a campaign for the overhaul and codification of Muslim Personal Law to bring it in line with the tenets of the Quran and the core values of the Indian Constitution. In recent surveys by BMMA, 92.1 per cent of Muslim women supported the abolition of triple talaq, 91.7 per cent opposed polygamy and 83.3 per cent felt that codification of Muslim family law would ensure justice and equality for the women of the community.

Last year, BMMA signed a letter containing a petition titled ‘Muslim Women’s Quest for Equality’. The idea was to initiate a discussion. The letter was a summation of the key points that the organisation laid down in its draft Muslim Family Law submitted to the National Legal Services Authority (NLSA). BMMA also sent a copy of the letter to Prime Minister Narendra Modi.

The Supreme Court took suo moto cognisance of the petition and a two-judge bench sought a response from the Jamiat-Ulama-i-Hind (JUH), a body of clerics, on the proposals made by BMMA. JUH stated that the Muslim Personal Law “flows from the Quran” and therefore it cannot be scrutinised by the Supreme Court.

BMMA dismisses this position. It asserts that there is no clash between the Quran and the Constitution in the matter of gender justice. Its draft Muslim Family Law suggests measures to make certain prevalent practices concerning marriage, divorce, alimony and custody of children, among other things, illegal.

The BMMA will seek to be a party to the case in the Supreme Court. The JUH, the Union government and the National Legal Services Authority are also petitioners in the case. A full-fledged battle on the rights of Muslim women is about to unfold. This time the women have the support of liberal men within the community and it is hoped that they get support from all political parties.

In the collective’s 10th year, Zakia Soman talks about the main issues her campaign is trying to address, the challenges it faces from conservative and patriarchal elements, and the successes it has achieved:

Tell us about the survey that the Bharatiya Muslim Mahila Andolan (BMMA) did recently.

We actually did two separate surveys. The one in August 2015 was a general survey that had a sample size of 4,710 and sought the views of Muslim women on a range of issues — age of marriage, polygamy, maintenance, the need to codify family law, etc. In the second survey in November, we pinpointed one issue — triple talaq. The women overwhelmingly expressed their view in favour of doing away with the discriminatory provisions of the Muslim Personal Law.

The Supreme Court, too, is exercised over the matter. A two-judge bench of the nation’s apex court is looking into whether Muslim marriage and divorce laws violate the fundamental rights of Muslim women guaranteed by the Constitution of India. Is BMMA planning to file a petition in the Supreme Court in this regard?

We have already submitted a detailed draft to the National Legal Services Authority (NALSA), spelling out the changes that we want in the Muslim Personal Law. Our stand is that a Uniform Civil Code is not the answer. What we are looking for is reforms in the Muslim Personal Law to safeguard the rights of women with regard to divorce, maintenance and family disputes. We are planning to enter the case.

We have suggested, among other things, that the minimum age of marriage be fixed at 18 years for girls and 21 years for boys; that triple talaq be declared illegal; that qazis who administer triple talaq be held accountable and penalised; and polygamy and halala be banned by law. Arbitrary and unilateral oral divorce and polygamy are against Quranic tenets.

What sort of response have you received from the community at large? Are liberal Muslim men supporting your cause? Have you faced any blowback from conservative segments?

It has been an eye-opener. Young Muslims, both men and women, are spontaneously supporting our campaign. But there is no doubt that patriarchal sections of the community are still dominant. A vicious campaign against me is doing the rounds of social media. They have dug out details about me, my husband and my background. They are saying that I am outside Islam, that I got married as per Hindu rites.

But the support that I have received in the wake of this personal attack and otherwise has been very encouraging. I am not active on Facebook, but I received over 800 friend requests in the aftermath of the slander campaign. There are bound to be some elements who will try to discredit our campaign but it doesn’t work anymore. Because of the visibility that we have gained, many known conservative people in public life have been forced to support us, or at least concur with us.

The clerics have said that they will examine the question of triple talaq on their own and do something about it. What are the chances of them actually doing anything?

There is no need for the clerics to tell us anything about triple talaq. It is anti-women and it does not have Quranic sanction. Triple talaq is banned in a large number of Islamic nations, including Pakistan and Bangladesh in India’s neighbourhood. We are simply demanding that changes be made in the Muslim Personal Law and codified so that the provisions are not left to how the qazis, muftis and maulvis interpret them.

Those who are against our campaign for gender justice are fringe voices and they do not have the support of the majority of Muslims. It is time to end patriarchal control on Muslim women. Politics has prevented women from being heard right since the days of the Shah Bano case. Left to themselves, certain conservative segments will continue to stonewall attempts to put in place marriage and divorce laws that are fair to women.

BMMA is in its 10th year. Are you satisfied with the way things have panned out since the collective came into existence in 2007?

We still have a long way to go. What we have done is turn the spotlight on the pressing need for action in women’s empowerment. We have become the voice of Muslim women at the national level. Politicians and activists keep talking about gender equality and justice but promises of change have not translated into reality. Regressive forces stand in the way, but we have been able to show that Islam is not a monolith — it has many faces.

We have succeeded in speaking out and reclaiming the religious space for women. We have over 70,000 members spread across 15 states. We are fighting against stereotyping of the community and painting everybody with the same brush. We have brought out the diversity in the community.

We have asserted that we women know Islam as well as the men. Patriarchal, distorted interpretations are not acceptable to us. We have come a long way and we have achieved some success. I think some celebration might not be out of place. We have reason to be satisfied on several counts. We came together to project the progressive voice in the community and fight against discrimination. We should be happy with whatever little we have achieved.

What do you think are the main obstacles that your campaign faces?

Obviously, the conservative forces in the community are putting up obstacles. They say that the Quran and the Indian Constitution are at loggerheads. They are not. The core values of both are justice and equality. The problem arises not from the Quran but from distorted interpretations of it by the ulema.

The Muslim Personal Law needs to be reformed on gender justice lines and within the broad framework of the Sharia and then codified so that all talk of a Uniform Civil Code is put to rest.

There is a nexus between politicians and the religious orthodoxy. This needs to be broken if women, not just Muslim women, are to be truly empowered and liberated.

When it comes to any debate concerning Muslims, only males of a certain kind — regressive rabble-rousers — are projected as representatives of the community. Women have to raise their voices and move into spaces from where they can offer leadership not just to women but to the entire community. Why should men monopolise leadership of the community?

Muslim women are among the most excluded segments of this country. Does BMMA also work towards bettering the lot of disadvantaged women?

It is true that Muslim women are badly off. They are discriminated against legally, too. While Hindus and Parsis have codified family and succession laws, Muslims have no codified personal law.

But average Muslim women face the same issues as anyone else in this country. So we work in five broad areas — education, livelihood, health, law and security. In all the states that we are in, we work with groups on a long-term basis to address problems that women face in these areas. For instance, when school terms begin in June, we do an enrolment drive for girls. We also work to improve retention and prevent dropouts. We work to ensure that the girls go to the next level of education.

Similarly, Muslim women, a large percentage of whom work from home, are in exploitative arrangements. In Madhya Pradesh and West Bengal, for instance, we found that unskilled women were being paid just `40 for making 1,000 beedis. I hope that under the Skill India programme, the government looks at Muslim women, too.

In the early years of BMMA, we were in areas that were prioritised as per the Sachar Committee recommendations. We were not looking at personal laws. But many victims of triple talaq would come to us to complain that they had been left to fend for themselves and that they did not have the necessary financial means. We were compelled to take up their cases. How do we explain to the conservative forces in the community that we simply had to do this? The clerics are elitist and very powerful — can ordinary women approach them for succour? They needed our help.

Does BMMA also throw in its lot behind other women’s campaigns?

Yes, it does. We supported Trupti Desai’s campaign to allow women to enter the Shani Shingnapur temple. We are also for women’s right to worship at the Haji Ali dargah. The Maharashtra Attorney-General (Sreehari Aney) has supported our right to enter the dargah. I hope that they take a similar stand in the matter of Shani Shingnapur and Sabarimala.

We also opposed the beef ban in Maharashtra and held demonstrations. The right to choice is a Constitutional right. What I cook, what I eat, what clothes I wear should be entirely my decision. That right is guaranteed to every Indian citizen.