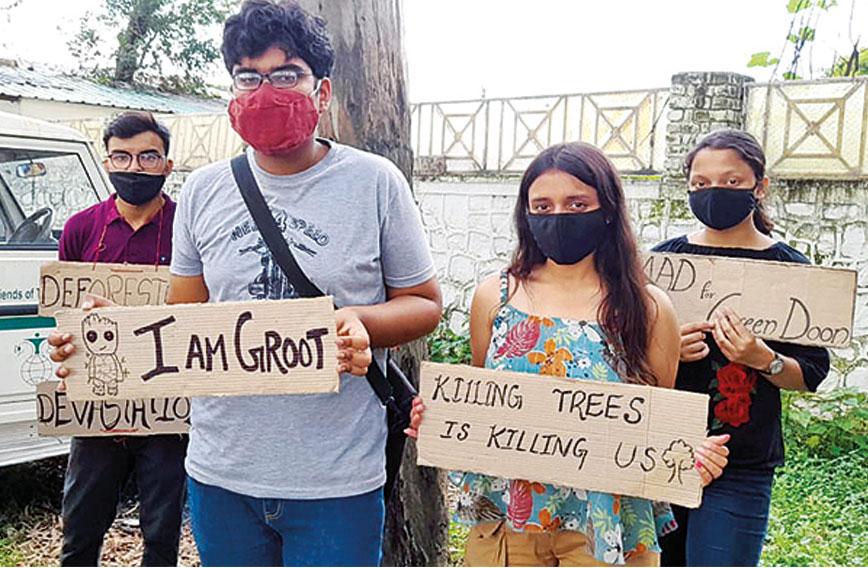 THE Doon Valley is witnessing protests by young people and senior citizens against felling of trees to broaden a highway connecting Dehradun with the picturesque hill town of Mussoorie. Angry and determined, the tree activists are turning up at various spots of the proposed highway expansion to stage protests.

On October 2, Gandhi Jayanti, they gathered at Asharodi in Dehradun, at the edge of a tunnel linking the city with Saharanpur. They shouted slogans and waved placards. Next, the tree activists, young and old, moved to Mohand in Saharanpur where they were joined by the Van Gujjars, a nomadic community living on the fringes of the Rajaji National Park.

A week earlier, on a leisurely Sunday, hundreds of tree activists turned up at Sahastradhara Road near the historic Khalanga War Memorial in Dehradun. They carried placards which read: ‘Ecology is permanent ecology’, ‘Tourists ko kya dikhaogay? Landslides?’, ‘Save Trees, Save Life’.

They pinned colourful posters on tall eucalyptuses lining the road. The posters depicted a tree bleeding and mauled, trees growing in a round circle, Mother Nature and her trees, and much more. Others tied raksha-sutra (a red thread signifying protection) on the trees and then hugged them, emulating the famed Chipko movement.

The government plans to widen the four-lane Dehradun-Saharanpur highway (National Highway 307) into a six-lane one. Around 15 km of road is on the Dehradun side and 30 km falls in Uttar Pradesh (UP). A bypass will be built, making it easier for tourists to get to Mussoorie.

But to do that some 11,000 trees will have to die: 2,700 trees in Uttarakhand and 8,300 in UP. Another 5,000 trees will subsequently be axed to build a science institute in Balwala on the outskirts of the city.

All this proposed tree felling has deeply incensed green activists, students and citizens. They point out that the Doon Valley has turned grey with dust and smog due to rapid construction of a plethora of buildings, surge in  vehicles and thundering traffic.

“Since Dehradun became the capital of Uttarakhand it has lost 70 percent of its tree cover. This proposed road widening will further denude its greenery,” rued Chetna Bhatt, 23, an undergraduate and a member of MAD (Making A Difference), a volunteer student group in Dehradun. Altogether 20 student groups, non-profits and teacher associations have joined hands to oppose tree felling.

“We’re here to save our beloved Dehradun from assured destruction. On this road alone 2,200 trees are going to be cut just to facilitate tourists coming in their huge SUVs. Instead of promoting tourism, it’ll destroy every tourist attraction here,” pointed out Anchal Sharma of the Earth and Climate Initiative.

She was correct. Located 14 km from Dehradun, Sahastradhara Road has, over the years, transformed into a posh area for the upwardly mobile. It is now dotted with multistoried apartments, malls, multiplexes, hotels, restaurants and an IT Park.

For years it was a tourist attraction. Sahastradhara means 1,000 springs. People would flock here to splash around in those springs. It still has a few sulphur hot springs left which are considered therapeutic. But most springs have dried up due to the construction of new buildings. It’s also a hilly area, higher than the city and therefore a little cooler. But Sahastradhara is now mostly in the news for waterlogging and landslides. A recent downpour nearly drowned its IT Park.

Even the eucalyptus trees, long derided by environmentalists for being water guzzlers, are being stoutly defended.

“We will replicate the spirit of Chipko. We have the blessings of Gaura Devi (a stalwart of the Chipko movement) who taught us to be ready to sacrifice our lives for trees,” said Anup Nautiyal of SDC Foundation, hugging a eucalyptus. His friend, Jaya Singh, encircled another tree.

“We won’t let them cut our beloved trees,” declared Arnav Ridh, 20, another undergraduate, who was there with his friends.

Some sceptics wondered why people were upset about eucalyptuses being felled.

“Even eucalyptus produces enough oxygen in a day for four persons. That’s worth a lot. People suffer due to lack of oxygen,” emphasized Archie Bisht, 22, another undergraduate.

“There are several other broad-leaved, slow-growing trees like peepal, mango, banyan and pilkhal (a species similar to peepal) being cut, not just eucalyptus. We don’t want our city to become like Ghaziabad or Meerut,” said Himanshu Kumar of Citizens For Green Doon, (CFGD).

Senior citizens joined in to protest against tree felling and to support the younger generation. “Sahastradhara is already a 60-foot-wide, two-lane road. That’s enough to bear the present load of traffic. We see no rationale for this tree sacrifice,” said Kalyan Rawat, environmentalist and founder of Maiti Andolan. A non-profit, Maiti Andolan propagates a tradition that has caught on. After their wedding, newlyweds take a sapling and plant it outside their home.

The protest is rousing support online. But there is a schism between participating groups on whether to approach the courts.The CFGD is not keen. They would rather continue the protest online and offline.

MAD is willing to go ahead. “We’ll be doing an online protest through Facebook, Twitter and filing online petitions through www.change.org. We will also go to court, if need be,” said Karan Kapur of MAD.

Tree felling in Uttarakhand has been stopped since a PIL was lodged in the Uttarakhand High Court. But in UP, felling has started.

“So far, the administration hasn’t responded to our protest. Cutting down eucalyptus doesn’t need permission from the forest department. I maintain eucalyptus trees are crucial for the biodiversity of an area as they give shelter to birds and bees. We will approach the High Court of Uttarakhand and the National Green Tribunal,” said Kapur.