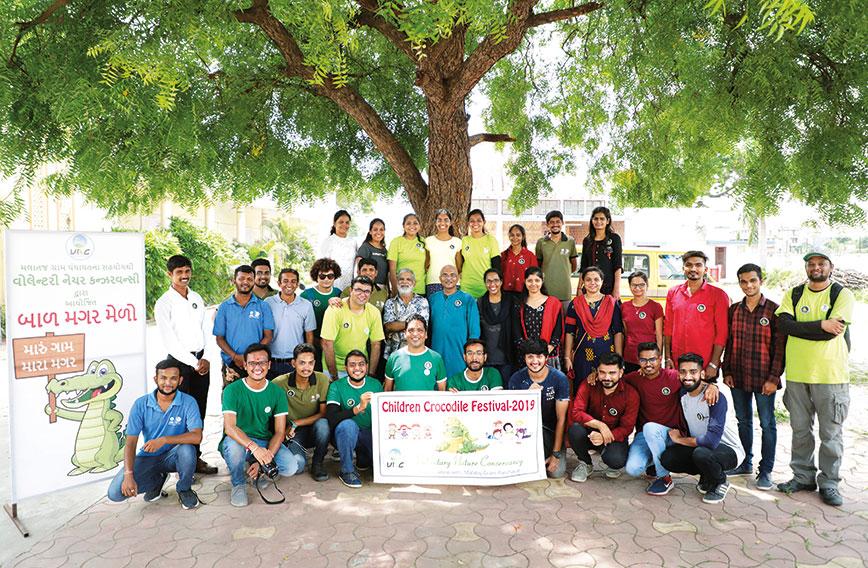 The Crocodile Fair was organised by Vidyanagar Nature Club

The first Children’s Crocodile Fair was held in Malataj village, in the lush  Charotar region 20 km from Anand, India’s milk capital. As many as 135 children between 11 and 15 years old took part.

The theme of the fest was ‘My village, my crocodiles.’ The day was full of games and competitions specially designed for children.

The fest was organised by the Voluntary Nature Conservancy (VNC), locally called the Vidyanagar Nature Club.

“Children are never involved in crocodile fests. We believe in educating them to live harmoniously with wildlife including crocodiles. Children are the custodians of the habitats of reptiles,” explained Dhaval Patel, managing trustee.

About 150 to 200 crocodiles live in the Charotar belt in the twin districts of Kheda and Anand.

The children played two games — Crocs and Ladders, and Crocs, Where are Your Eggs?

There was also a painting competition and an elocution contest. “Drawing crocodiles who live in our  village pond was really very invigorating,” said young Bhumika Parmar. Her creativity and skills won her the first prize.

All the paintings were very colourful and vibrant and reflected the affection the children had for the crocodiles in their village. Viji Ode, Dhavan Macwana, Pallavi Patel and several other children who took part in the elocution contest won awards. “Crocs have 24 teeth. They are our friends and can never be our enemies. We have 17 crocs in the two ponds in our village and we would not like them to move out,” said Prakash and Deep from Petli village.

Prakash said he loved playing eendu or the egg game. The child has to cross a stretch without harming a female crocodile played by another child,  protecting her eggs. The child who crosses successfully is a winner. White stones from the river beds were kept along the path representing the eggs. No live crocodiles were brought in. This game has been replicated from the traditional game of eendu.

Most of the children who participated belonged to poor homes, many of whom couldn’t  afford to purchase school bags and geometry boxes. A school teacher from Traaj village narrated Alpesh Kumar’s case. The boy had sought financial assistance to buy a  school bag. Luck favoured him. He won the third prize in the painting competition and received a school bag along with a cash prize of Rs 500. All the children who won were given school bags. The Vidyanagar Nature Club gave all the children who participated Camlin geometry boxes with a poster of ‘My village, my crocodiles’ pasted inside each box.

The crocodile festival was a local affair which reached out to the local community. Teachers and the revered Dr Raju Vyas, Regional Vice Chairman of IUCN/SSC Crocodile Specialist Group, South Asia and Iran, attended. He is also the retired inspector of the Sayaji Baug Zoo in Va