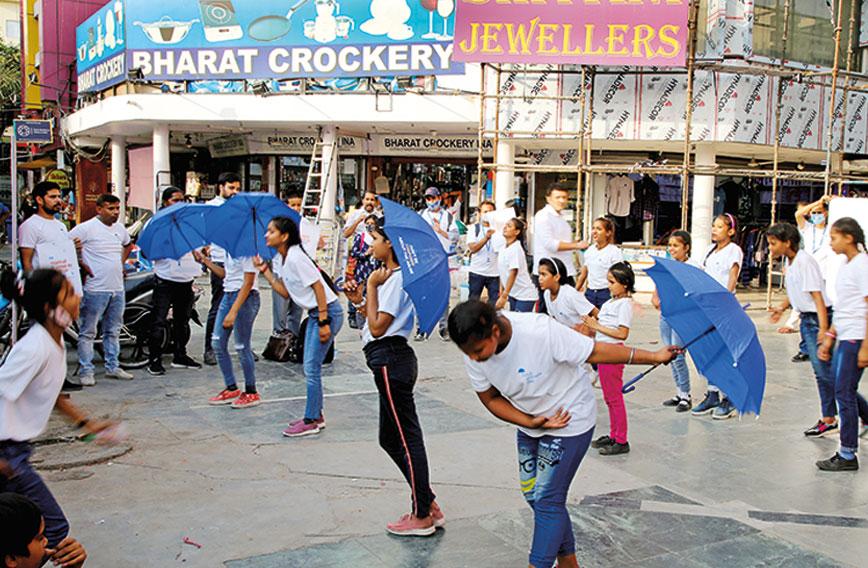 TALK about sexual abuse of children tends to focus on girls, but what do boys go through? Figures put out by the Indian government reveal that 53 percent of all children face some kind of sexual abuse and of that number as much as 52.9 percent are boys.

Such abuse mostly isn’t  spoken about and tends to be kept under wraps. In a patriarchal society, boys are supposed to look after themselves and if they don’t, they are branded sissies.

But on April 14, Blue Umbrella Day, a campaign was launched by Family for Every Child (FFEC), an alliance of 41 NGOs from 37 countries headquartered in Britain, to spread awareness of sexual violence against boys.

The campaign hopes to change such attitudes and start a discourse. It aims to sensitize adults into being more caring and protective towards boys.

Butterflies, a Delhi-based NGO which works with street and working children, is part of the alliance. On Blue Umbrella Day, it launched its survey report, ‘Breaking the Silence on Sexual Violence against Boys in India,’ which examines the links between concepts of masculinity, sexuality and sexual violence against boys.

“Butterflies and 13 NGOs from nine states in India, who are members of the National Alliance of Grassroots Organisations (NAGN), are running the Blue Umbrella Day campaign. We have created a special song, initiated social media activities and mobilised the media on this issue. We hope to start a public discourse, challenge dominant social norms related to gender, masculinities and sexuality and give all children, girls and boys equal adult protection, care and guidance,” said Rita Panicker, head of Butterflies.

The slim and informative report, limited to Delhi, includes survey findings and recommendations. The NGO identified boys who experienced sexual interactions from cases in their Mental Health Unit or one of its partner organizations.

A total of 20 boys between 15 and 18 years participated in extended interviews. Another 15 boys and 15 girls from the general population took part in six focus group discussions. The study also covered 28 stakeholders including parents, professionals such as teachers (three males), six female social workers, experts in child protection, Child Welfare Committee (CWC) members and one member from the Juvenile Justice Board (JJB). Altogether 78 people participated. Field work was carried out over a period of four and half months from mid- July to October 2018.

Here are some of the findings of the report: A few are surprising.

The majority of boys interviewed were sexually abused between the age of 14 and 16. A few victims were found to be around 10 years of age. Almost all the perpetrators were known to the boys and only in three cases  were they strangers. Known persons included close relatives, neighbours, older friends and adult acquaintances. Boys from middle-class families were also sexually abused, although their representation within the sample group was low. Three boys from middle-class family backgrounds shared their troubled experiences.

Families gave boys the notion that they had to be ‘masculine’, ‘courageous’ and ‘independent’ beings who were supposed to take care of themselves, their families and the community. This was further underlined by bringing out the sexual division of labour within households. Girls did housework but not boys. So the boys were free to roam around but not the girls.

Almost all the boys who were sexually abused expressed their experience in one phrase: “Mere saath galat kiya.” Gifts, food and even drugs were given to boys in some cases.  A boy mentioned: “He gave me food and 'solution' and I agreed”. In  cases where women, older friends and peers were perpetrators, persuasion was used.

Almost all the survivors of abuse said they felt fear, anger, rage and shame. They got no support or even a sympathetic hearing. Some of them absented themselves from school, lost interest in studies and some even dropped out of school.  The boys also lacked awareness of sexuality, its social meaning or health implications, including knowledge of HIV.

“Viewpoints of boys further explored multiple situations of anger in which expressions of varying forms of violence were normalized,” says the report.

The boys were most influenced by family, peers and the media. Patriarchal notions of masculinity and sexuality came mostly from the family.  But parents and family were not sources of information. All the boys developed their understanding of sex and sexuality through their childhood sexual experiences and interaction with the media and peers, according to the report.

The boys got their information through mobile phones, computers, TV and books. Almost all the boys accessed pornographic materials through mobiles and shared such content with their friends through WhatsApp and Facebook.

There is a real need to introduce sex education in school, include male counsellors and change the way boys think of themselves. The report includes such recommendations.