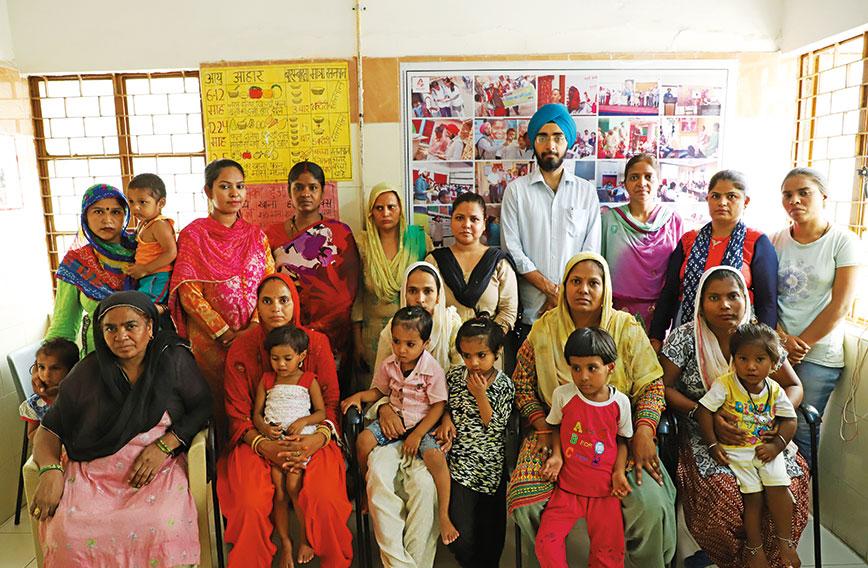 Barkha’s  husband, Pintu, earns Rs 7,000 a month as a salesman in a company.  “I don’t spend much on food, but we don’t go hungry,” she says. Her two older children, Tanisha and Lucky, look healthy as they run around their cramped house in Prem Nagar in Lal Kuan village on the Mehrauli-Badarpur road in New Delhi. But the youngest, five-year-old Ayush, is emaciated and pale.

Ayush is lucky to have survived at all. He was born at home and weighed just 1.5 kg. He wasn’t breastfed. A victim of domestic violence, Barkha fractured her leg during her third pregnancy and could not register herself with the ASHA or anganwadi worker. Neither did they reach out to her.

It was Arvind Singh and his team from Matri Sudha, based in Lal Kuan’s Nardan Basti, who spotted Ayush. They were on one of their routine growth monitoring visits and turned up at Barkha’s doorstep. The team was appalled to find that Ayush weighed merely 5.65 kg instead of around 8.3 kg which is the standard weight for a child his age. Ayush couldn’t even sit up. The child fell in the Severe Acute Malnourished category. Half the children in Delhi’s slums are underweight, according to a study by CRY (Child Relief and You) in 2015.

In July the city was shocked when three children, who were eight, four and two years old, died of prolonged starvation in Mandawali slum in East Delhi. The family didn’t have a ration card. Neither were the children enrolled in the anganwadi centre which would have entitled them to one meal and alerted the anganwadi and ASHA worker to their impoverished condition.

The most marginalised families and their children need to be identified and helped by an alert team along with the anganwadi workers,  ASHAs and the community. This is exactly what Matri Sudha and its Poshan (Nutrition) Champions are doing with great impact.

The team saw to it that the baby was registered with the local anganwadi centre, linked to the immunisation process and to a community health worker. The obdurate father had to be threatened with police action unless he took the child for screening to the local primary healthcare centre (PHC). The father finally relented. Ayush was referred to Kalawati Saran Children’s Hospital. The Matri Sudha team accompanied Barkha and Ayush. The child was diagnosed with rickets caused by severe Vitamin D deficiency. He would never walk without surgery, warned the doctors. Fortunately, with medicines, nutrition counselling and Barkha’s loving care, Ayush can stand now though he barely speaks. He undergoes speech therapy at Kalawati Saran Hospital and will in time be ready for school. 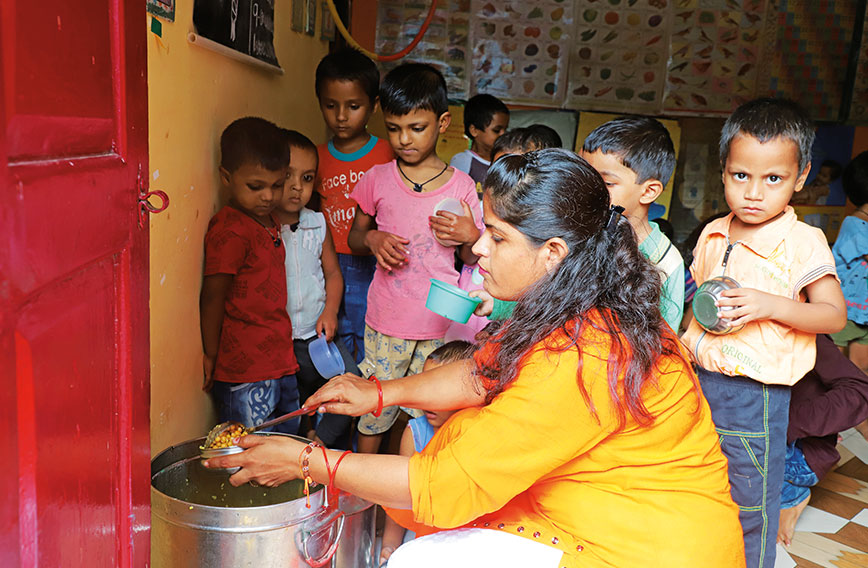 A cooked meal at the anganwadi

“Malnutrition is not just related to poverty but to the family’s environment.  We felt there should be a group of resource persons within the community who could implement our objective of improving the nutritional status of children below six years, adolescent girls, and pregnant and lactating mothers. We wanted to create local leadership around the issue,” says Arvind Singh, head of Matri Sudha.

Poshan Champions like Kavita Chauhan, Seema, Shamima Begum and Kavita Kumar are today important change agents in Lal Kuan. Anganwadi worker Kavita Chauhan commutes all the way from her home in Greater Noida to the anganwadi centre at Nardan Basti in Lal Kuan which has become a landmark for the community.

Chauhan says proudly, “It is because of my constant follow-up with the authorities that mid-day meals have improved.” In one corner of the anganwadi centre is a weighing scale on which children are weighed monthly though the norm at most centres is to weigh children every three months. If Chauhan notices that a child is severely malnourished, she weighs the child three times a month. “Along with the Matri Sudha team and ASHA worker, I never fail to visit the homes of pregnant and lactating mothers to explain the importance of good nutrition, antenatal check-ups, vaccination and immunisation. We also hold regular meetings with women  on subjects like breastfeeding at the anganwadi centre,” she says.

Community members have become more receptive to regular growth monitoring of their children and are involved in maternal and child health issues, according to Chauhan. Also, the women themselves call meetings.

Poshan Champion Kavita Kumar, who is 25, holds up her healthy two-and-a-half years old baby boy, Vansh. She is a role model for the community. Motivated by the Matri Sudha team, Kumar, a victim of domestic violence, never skipped a single antenatal and post-natal check-up at the PHC. Her son was always immunised on time.

Shamima Begum has also earned recognition as a Poshan Champion and as an ideal mother-in-law. “I have four daughters-in-law whom I looked after very well when they conceived. My seven grandchildren are healthy as I explained the importance of breastfeeding to their mothers. Now I always check if new nutritional supplements or vaccinations are necessary. I share my knowledge at community meetings,” says Shamima. Matri Sudha plans to draw in more fathers to the discussions. 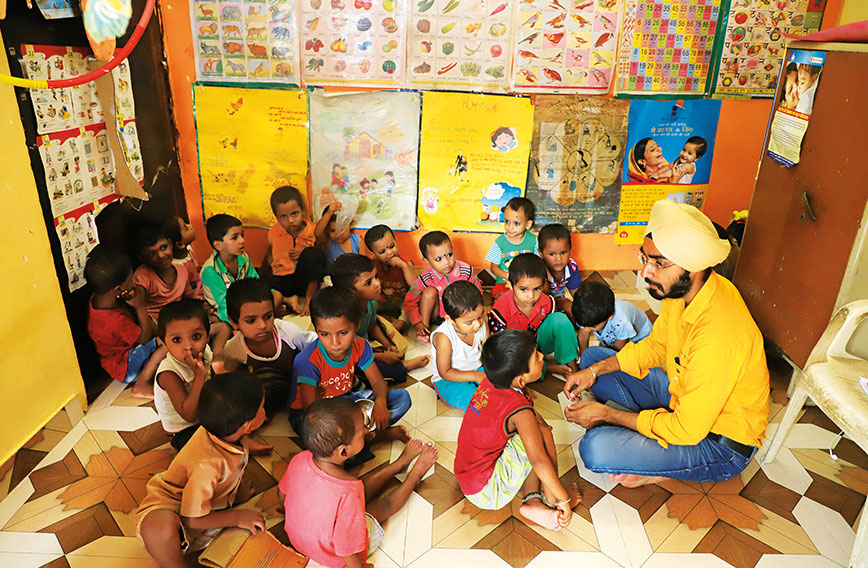 Arvind Singh with children at an anganwadi

Large Poshan Sabhas are also organised by Matri Sudha. “These sabhas help us create awareness and enable sensitisation. We share positive stories by people themselves. The sabhas also connect people on the issue of malnutrition,” says Singh. Recently, Matri Sudha organised Poshan Sabhas in Nardan Basti and V.P. Singh Camp. The Poshan Sabhas were led by enthusiastic youth and adolescents. One youth member provided statistics and talked about the dire consequences of malnutrition. Another narrated the story of two malnourished adolescents.

It hasn’t been easy for Matri Sudha to catch the attention of the community. When they began, misconceptions abounded about growth monitoring of children. Parents felt that weighing children regularly would hamper their growth. The anganwadi centres remained deserted. The Matri Sudha team was going door to door and monitoring the growth of every child in Lal Kuan.

The outcome has been encouraging. Today the community is keen that their children go to the anganwadi centre, get their meals and their growth monitored. An increasing number of children who were severely underweight have improved. The recent Poshan Sabhas witnessed larger turnouts. 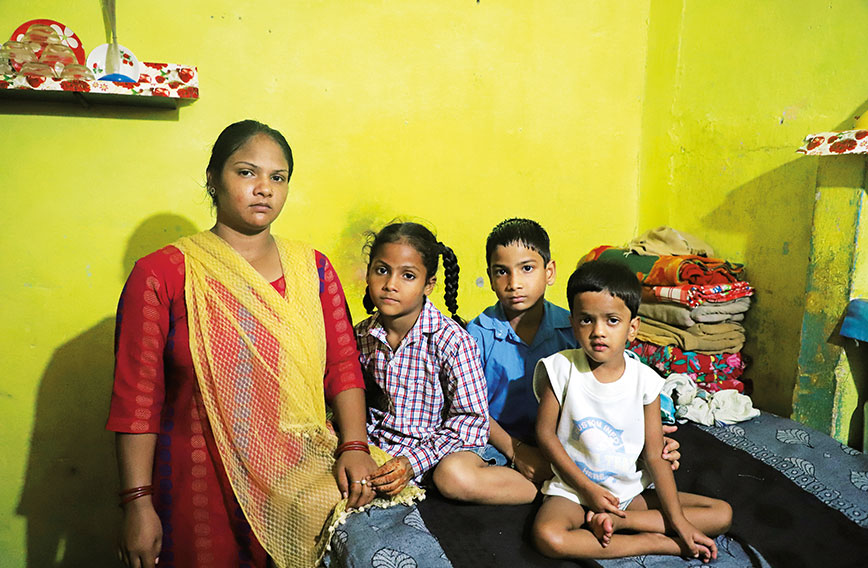 Barkha with her three children

Matri Sudha launched a Freedom from Malnutrition Campaign on Independence Day. “Though we have got freedom from colonial rule,  children need to be freed from malnutrition,” says Singh. The campaign aims to make Delhi free of malnutrition.

The group has key demands — a state plan of action on malnutrition with a dedicated budget,  better quality  and more nutritious food for children in government schools and anganwadi centres and a State Food Commission to monitor implementation of the Food Security Act.