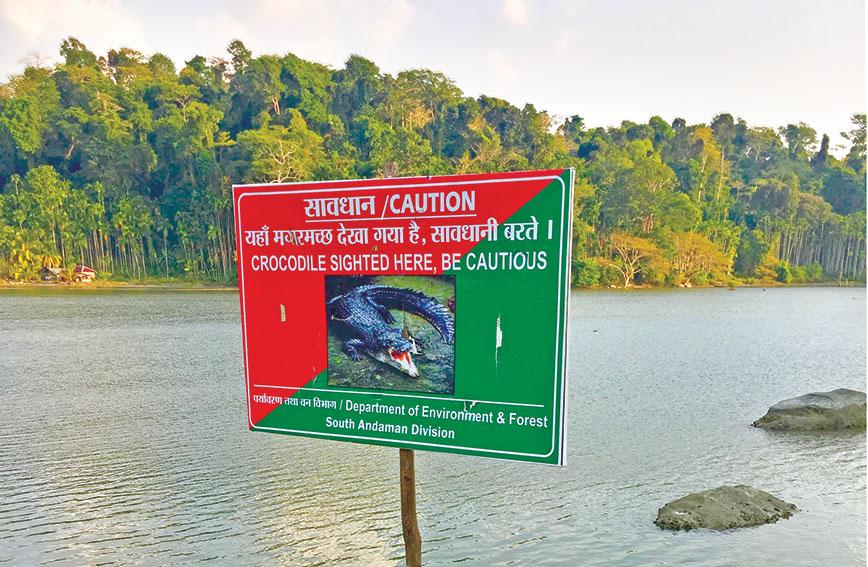 Signboard warning people of crocodile sightings in the vicinity

Crocs do their own number in the Andamans

Rising attacks on humans by saltwater crocodiles in the Andamans are stoking fears about how this will affect day-to-day life and tourism in these idyllic islands located some 1,000 kilometres off the east coast of India.

No one in authority, least of all officials from the forestry department, is prepared to admit that there is a problem, or that there are regular attacks by the predators that have resulted in deaths and injuries to both children and adults. Principal Conservator Manmohan Singh Negi, who is responsible for wildlife in the Andamans, is reluctant to discuss any actual statistics. “If you want to send anything to a news agency, you must first clear it from here,” he says, by way of explanation.

The expansion of the human population and regular seismic activity in this island chain may be one reason the crocodiles appear to be lashing out so aggressively.

Another reason could lie in the 2004 tsunami and the 25-foot-high waves that disrupted their natural habitat, forcibly relocating them all over the islands. The forestry department’s half-baked response has been to free any trapped crocodiles by releasing them into a mix of forests and mangrove swamps, hoping they will not venture into areas inhabited by humans.

What has happened, in fact, is a dramatic increase in crocodile numbers with nothing to challenge their multiplication but for the occasional attack by the likes of massive pythons. Widely differing estimates put their numbers at anything from 450 to more than 2,000. The forestry department is more conservative, with one official coming up with a widely disputed total of 470.

The department’s reason for downplaying numbers is to avoid attracting poachers from nearby countries like Thailand who have turned up in the past, armed with stun guns, lured by crocodile hides fetching as much as $2,000 per hide, sufficient for at least one handbag or a pair of shoes. Two or three hides are believed to be sufficient for a bullet-proof jacket.

“The crocodiles have scattered everywhere,” says Stanley Johnson, Deputy Manager of the Andamans’ largest saw mill. “Lohabarak sanctuary is where they used to be kept, but after the 2004 tsunami they scattered. Now they have multiplied to thousands. Every year seven to eight people are killed.”

As their numbers have multiplied, say locals, so have confrontations with humans, causing injury or death. “What l have heard is that these crocodiles are being released on a mass scale into the forests,” says Mayur, a 26-year-old islander working with a private airline who was born and raised in Port Blair. “From the forests they have spread out.”

Akash Paul, an Assistant Conservator of Forests, admits there have been attacks but claims they number no more than two or three a year. “Recently, human-crocodile conflict has increased,” he agrees before highlighting two particular cases in which the victims died.

Still further back, according to the register of confirmed deaths, is the instance of eight-year-old Madhulika Das who was grabbed as she and her family waded out to a dinghy anchored close to their home.

Yet these few examples do not convey the full horror of crocodile aggression, nor are they representative of the graph of rising attacks. 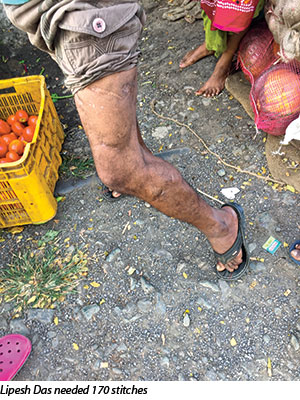 Typical of some unregistered cases is the miraculous survival story of 45-year-old Lipesh Das from Manglutan who attracted the attention of a crocodile as he waded out to start up a water pump on the edge of the village nullah. His aim was to channel fresh water for the fields of bhindi and baingan that he cultivates for a living.

Before he knew it, Das had been grabbed and shaken by a massive three-metre crocodile that surfaced behind him. His screams fortunately attracted the attention of other villagers who came to his rescue. A shopkeeper stabbed the crocodile with a knife, forcing it to release Das from its jaws. Five months and 170 stitches later, the farmer is back on his feet, grateful to have survived.

At least as compelling is the story of Sarjit Bhairagi, a 25-year-old scuba diver who was fixing the propeller of his boat, anchored off Wandoor Beach — part of the Mahatma Gandhi National Park.

“Our boat’s faulty exhaust pipe had broken off into the water which had mangled up the propeller. Me and my fellow diver, Abhi Nashbala, went to repair it. Before l knew it, this 2.5-metre green and yellow reptile had my head in its jaws.

“It took me under but l had the good sense to go limp so it did not sense any resistance. This gave Abhi time to dive after me and impale the crocodile’s eyes with his fingers, forcing it to release me.

“When l came out, l was bleeding from everywhere and stayed in hospital for 25 days. l had 40 stitches with 29 in my head alone.”

Despite official hospital records, it seems Paul and the other conservators choose not to register the experiences of either Bhairagi or Das, which may be why neither man has been offered any compensation. Paul adds by way of further justification that Bhairagi was diving in protected waters that are meant to be off-limits for humans. 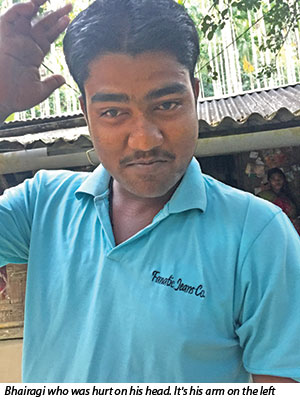 The conservators all agree there have been crocodile-related tragedies, like the widely reported case of the American woman tourist who was snorkelling in a supposedly safe cove off Havelock Island when she was attacked and killed in front of her horrified Indian boyfriend. The authorities implied her partner was responsible until he produced video evidence of what had actually happened.

The attacks have matched a rise in sightings of the reptiles who like to sun themselves on the beaches of Port Blair and nearby recreation spots like Corbyn Bay. Local headmaster Francis Xavier has a clear recollection of arriving at work one morning to find two crocodiles basking on the sea front, only a few hundred metres from his school.

Despite mounting evidence to the contrary, the Forestry Department continues to stress that crocodile attacks are rare. Its belated response to the public’s fears has been to put up signs reading, “Crocodile sighted nearby, beware.” Some signs in red and green even have the date and time when the last crocodile was seen.

Another safety measure has been to instal barriers of netting in the waters off key beaches like Wandoor, hoping this will create small but safe swimming zones in the sea.

Amit Anand of the Andamans Tourism Department agrees that new submerged areas have been created since the tsunami and they have attracted crocodiles, but he stresses there have been no attacks on tourists for the past six or seven years. “Some locals have been attacked and there have also been attacks on cows grazing near the creeks. Warning signs have been put in areas to discourage those who see water and want to jump in. Tourists also need to behave responsibly.”

Asked if licensed culling of crocodiles might be a way forward, Zai Whittaker, Director of the Crocodile Bank Trust/Centre for Herpetology in Chennai, responds, “As with elephants in South Africa, the time may come when culling is necessary, but we should try everything else first.

“My understanding (and I’m not a biologist) is that, as with all human-animal conflict, habitats are dwindling, and the human population is growing. When I first went to the Andamans in 1976, the human population was 80,000. It has multiplied many times, with no proper criteria for settlement. We have destroyed this dynamic animal’s home, and are now blaming it for attacks.”