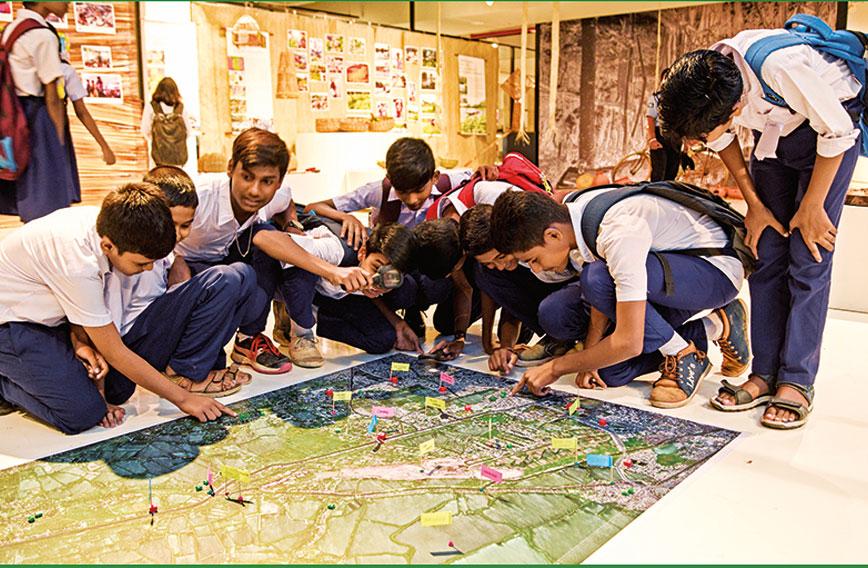 Schoolchildren poring over a map of the east Kolkata wetlands

The east Kolkata wetlands, a unique resource described as the city’s kidneys that clean up wastewater and help grow fish and vegetables, are threatened. The changing nature of waste which is getting more and more inorganic, and urban greed for land are the twin dangers.

To fight this, those who live amidst the wetlands have to realise what they need to preserve and the best way to create public awareness is to speak to the young. Climate Diplomacy Week 2019, organised by a group of artists, Disappearing Dialogues Collective, and the German consulate in the city, reached out to the children of two schools in the area, Kheadaha High School and Bamanghata High School.

The children participated in workshops where they learnt how to recycle discarded items of everyday use like plastic bottles, caps, jars and tyres. What they created became part of an exhibition curated by Nobina Gupta and put together by the collective.

The exhibition began with the history of how the wetlands evolved and interpreted the ecological story of recycling. It noted the contribution of Dr Dhrubajyoti Ghosh, an ecologist credited with discovering and documenting the resource recovery features of the wetlands.

It also noted the ecological loss from human interventions in the city and pointed to an uncertain future. An imaginary digital artwork with the cityscape made out of dumped waste showed how waste of all kinds produced in the city comes to the wetlands, upsetting its ecological balance, and the benefits of protecting the environment.

A map with nearby landmarks showed the wetlands and the participating communities in the proximity of the city. The unstated demons are the newer concrete structures which are still being permitted.

Art workshops were held to create environmental awareness and the need for conservation among the youth. Alternatives were evolved on how the gap between pedagogy and innovation can be breached. Teaching aids were made like patachitra, a song on the story of the wetlands, a booklet and a visual calendar.

The youth travelled along the wastewater canals in the wetlands to collect samples, record their observations through sketches, drawings and writings. A nature journal was created from observations of children, stories by children and local recipes.

An arresting feature was a video presentation as a walkthrough on the role and importance of canals. A big fishing net on a bamboo structure reflected the unique fishing practices utilising wastewater as a nutrient.

A series of workshops was held with the schoolchildren on how to deal with waste by making handmade paper from banana stems, herbal gardens in discarded plastic bottles, and musical instruments from domestic waste materials.

There was an actual boat with a pool of waste depicting the link between water, wetlands and the urgency of the situation. The exhibition was marked by aesthetic appeal and innovation that showed how the ordinary things we do and the stuff we throw away cost us so much.