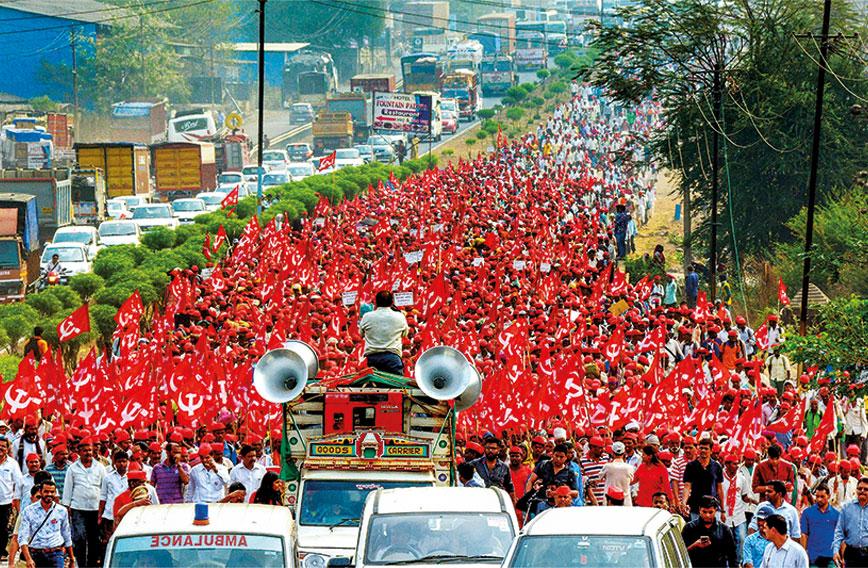 When nearly 50,000 farmers marched  into Mumbai from the rural interiors of Maharashtra, they captured national and international attention for their demands of ownership of their traditional lands under the Forest Rights Act, higher minimum support prices for crops and waiving of loans.

The farmers arrived in the financial capital on 11 March, carrying red flags emblazoned with the symbol of the sickle and hammer. They had covered 180 km on foot from Nashik, rallying under the banner of the All India Kisan Sabha (AIKS).

There were traditional farmers and adivasis, many of whom marched almost without food or  footwear because they were from among the poorest of the poor in the tribal areas of Palghar, Nandurbar, Thane, Nashik and Dhule in north Maharashtra. 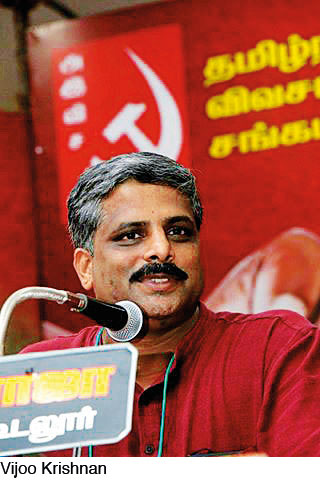 “The long march was a collective effort of individuals, full-time workers and progressive grassroots and farmers’ organisations led by the AIKS. So please don’t highlight one individual only,” said Vijoo Krishnan, joint secretary, AIKS, and former president of the Jawaharlal Nehru University Students Union (JNUSU) in Delhi. “It was the culmination of many mass struggles and a huge organisational effort for many months.”

The AIKS traces its history to the freedom struggle. Founded in 1936, it was the peasant front of the undivided Communist Party of India (CPI) which was established in 1925. Mumbai was the nucleus of the communist movement at that time. The party’s two biggest pillars of strength were Mumbai’s working class and the cultural denizens of the city — the Indian Progressive Writers Federation with Munshi Premchand as its first president, and the Indian People’s Theatre Association, which had legends like Sahir Ludhianvi, Kaifi Azmi, Salil Chaudhury, Balraj Sahni, Chetan Anand and Ritwik Ghatak as its members.

The sickle-and-hammer was the official logo of the famous Mehboob Studios in Mumbai.

The AIKS, along with the All-India Students Federation (AISF) and the All-India Trade Union Federation (AITUC), spread to Punjab, West Bengal, the Hindi heartland and Andhra Pradesh. Leftists say this is because Indian communists, heeding Lenin’s advice, joined the Congress coalition led by Gandhi and Nehru. The communists penetrated the Congress Socialist Party and E.M.S. Namboodiripad became the president of the Kerala Pradesh Congress Committee.

According to Krishnan, the AIKS is not directly affiliated to the CPI(M), despite the common perception. “It is an independent formation with CPM members, but there are others too,” he said. “In that sense, the CPM does not strictly have a peasants’ front and it does not control the AIKS.”

Although the AIKS comprises the poorest of the poor, including landless tribals, Dalits, OBCs, sharecroppers, small and middle farmers, it also includes big farmers. “We have a strong, united organisation,” said Krishnan. “And we are not class-centric.”

In Rajasthan, Odisha, Madhya Pradesh, Uttar Pradesh and Himachal Pradesh, AIKS has made local and national alliances with progressive groups and grassroots movements, including the Narmada Bachao Andolan, Swaraj Abhiyan, National Alliance of People’s Movements (NAPM), among others. In the days to come, they plan to meld all these movements and widen their reach.

The AIKS has been consistently fighting for farmers’ rights. Last year, it led a successful farmers’ movement in Rajasthan with two specific demands: loan waiver and implementation of the Swaminathan Commission report. The movement was led by former CPI(M) MP Hannan Mollah from West Bengal, and former MLA Amra Ram. Later, Ram went on to organise a huge three-day rally with farmers of western UP and Haryana, and invited former Tripura Chief Minister Manik Sarkar as chief guest.

The long march to Mumbai was a natural progression of the AIKS’ agenda. How did it organise a march of this scale, and work out the logistics of feeding 50,000 farmers? All of them walked for four days in the blazing sun.

“We would march for long hours very early, much before dawn. Farmers and tribals would join in large groups during the course of the march. We had trucks carrying medicines and essential commodities. We would stop near a river. Neighbouring villagers would pour in with food, water and help. Basic food was cooked and collectively shared. Early morning, we would bathe in the river and continue the march,” said Krishnan.

An activist who walked with the marchers said that after dark, while everyone rested, he thought that now he would get a good night’s sleep under the open sky with a thin blanket. However, he was woken up soon after midnight, to get ready to walk again. Indeed, the marchers were committed and resolute and eager to cover the long distance on foot.

They were also sure that they would gherao the assembly in Mumbai, and not return, come what may, unless they got an agreement “in writing”.

Krishnan walked with the farmers for the first two days. He had to rush off to Odisha for a day, but was back for the final leg of the march as the farmers entered Mumbai on 11 March. That they preferred to walk an extra 25 km at midnight to reach their destination, so that school students sitting for the board exams were not affected, touched the hearts of the citizens of Mumbai, and the rest of India.

According to Krishnan, several leaders and activists played a key role in organising and mobilising the people. Veteran CPI(M) MLA J.P. Gavit played an extremely important role, along with Ajit Nawale, state secretary, AIKS, and Ashok Dhawale, president, AIKS, and others. “They had organised a massive 100,000-strong rally in Nashik in 2016, when we blocked the roads. Then, again, in Palghar, a 50,000-strong protest was organised by mostly tribals who came from deep interiors. Earlier, milk and vegetable supplies were blocked to Mumbai and other places by blockades. The Nashik to Mumbai march was the culmination of many such struggles,” Krishnan said.

The AIKS is taking up two issues. First, to wean away farmers from mass suicides by forging a strong movement to secure their longstanding rights. Second, to fight communalism and hate politics.

It surprised Mumbaikars how disciplined and considerate the farmers were. Mumbai’s residents, across the class spectrum, showered flower petals on them, dabbawallahs landed up with pav bhaji packets, locals lined the streets with water bottles and packets of biscuits, doctors rushed to bandage the weary and bleeding feet of women and men, while white-collar professionals went around neighbourhoods to collect slippers and sandals for them.

Almost all political parties, barring the BJP, came out in support of the farmers’ march, including the Shiv Sena, part of the ruling alliance in Maharashtra, and the Maharashtra Navnirman Sena, led by Raj Thackeray. Aditya Thackeray, the Shiv Sena’s young inheritor, was asked how come saffron had joined hands with red. “Their blood is red, like ours,” he replied.

The march ended with the farmers extracting a promise from Maharashtra Chief Minister Devendra Fadnavis that their demands would be met in the coming six months. The state government agreed to a farm loan waiver from 2001, implementation of the Forest Rights Act, 2006, including Community Forest Rights, sharing of water from 31 water projects and the river-linking projects with no displacement, and minimum support price for agricultural produce in line with the recommendations of the Swaminathan Commission.

But a much bigger gain from the march was that it succeeded in highlighting rural distress and striking a chord with the middle class and the wealthy. Also, it brought together farmers from different economic and social segments.