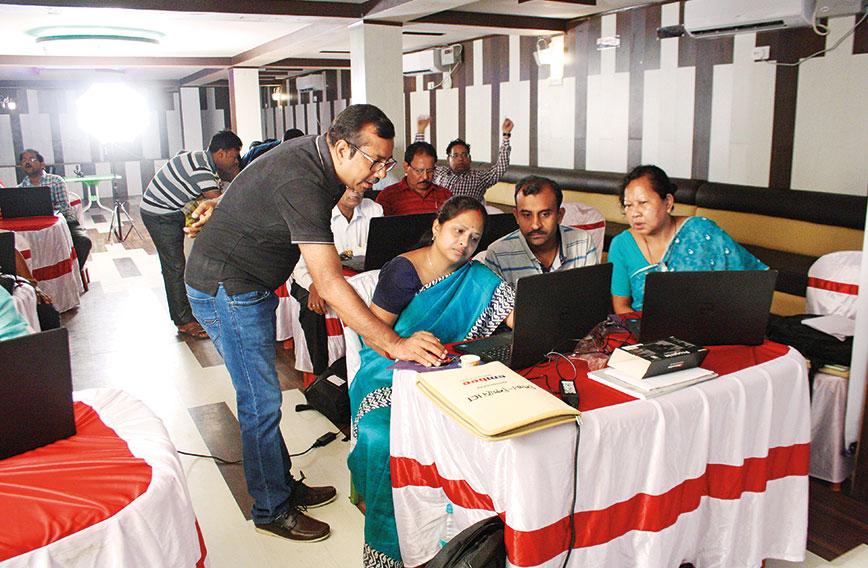 Govt school teachers get tech savvy with a little help

At a picturesque resort amidst a tea garden in Alipurduar district of West Bengal, 20 schoolteachers from remote government schools listened intently to Debasish Mondal, a head teacher. He was explaining how audio-visuals could be used to make teaching fun for students. Mondal, who is younger than some of his own students, is a veteran in holding forth on use of audio-visuals in school teaching.

The teachers were attending a two-day workshop organised by Embee Software, an IT solutions company, the Kalchini Panchayat Samiti in Alipurduar district and AHEAD Initiatives, an NGO, to help government schoolteachers learn how to use audio-visual aids to enhance their teaching.

Four such intensive workshops in a year are planned along with monthly reviews with teachers through a dedicated Facilitation Centre, ending with a Lesson Plan competition.

AHEAD facilitated the partnership with Embee Software and the panchayat. It is rare for a company and a panchayat to come together to implement a CSR programme and is, probably, a great example for other companies who find it difficult to partner even an NGO.

Abeer Chakravarty, chairman of AHEAD Initiatives, explained that the workshop was taking place against the backdrop of a high dropout rate in government schools. One way government schools could retain students was by making learning joyful through use of technology.

Most CSR budgets focus on activities around their establishments and not in far-flung, remote areas where the need for such funds is acute.

“We are excited to see how this project takes shape,” said Utsav Kothari, director of Embee Software. “This CSR project helps entrench Embee’s belief and practice of going beyond hardware and software to provide solutions that help transformation, whether it be for their customers or for underprivileged teachers and students.”

Two-thirds of the 20 teachers attending the workshop didn’t know how to use computers. They had been selected by an empowered committee of the Panchayat Samiti.

Each teacher was first presented with a kit by Embee Software. The kit consisted of a laptop, a smartphone with a data card, mini-projector, sound pod and accessories such as a headphone. The idea was for every participant to become familiar with the gear, use it to do simple things which enable the use of audio-visuals in teaching, and then take it back to his or her school for the other teachers to use and pick up similar skills.

One of those who attended the first workshop was Shyam Sharma, the 40-year-old head teacher of Bedvyas Nepali Primary School in North Bengal’s Jalpaiguri district. He is no stranger to computers. He uses a laptop and his school has bought a TV and two computers to teach children how to use them. One of the new projects he has in mind is to hold special classes after regular school hours for backward children in which audio-visual teaching aids will be used. This is because he has realised that audio-visual aids are a key enabler in situations where the normal way of teaching does not help.

Till now Sharma has made do with stills and handwritten material to prepare audio-visual aids for use in his school. Now he is excited about using the new techniques he has picked up for lessons focused, for example, on his school’s environment and on the Swachh Bharat Abhiyan. The two meet in simple messages like “Don’t drop garbage on the street.”

Sharma, in a way, is not the typical government schoolteacher. He is obsessed by the private schools near his government school with which he has to compete. “We have an inferiority complex,” he confesses. To change mindsets, he has made the tie a compulsory part of the school uniform. He is extremely proud that, be it in a football tournament or at the Independence Day parade, it is his children who are the winners. His enthusiasm has touched parents and when he calls a meeting they turn up in good number. 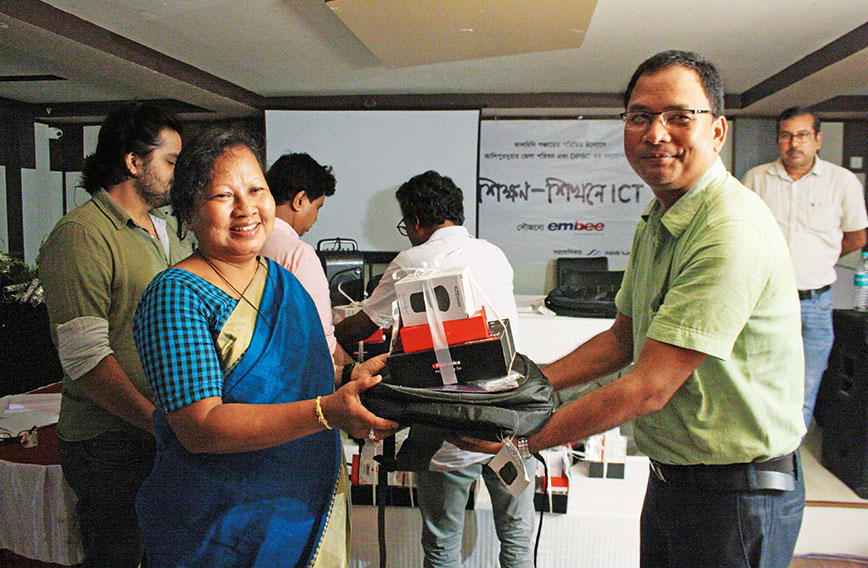 Kshama Roy, the 58-year-old head teacher of Netaji Prathamik Vidyalaya, does not use computers. But she is also special. At a workshop session when she made a presentation to go with a visual clip, enacting how she would teach her students, she was so obviously good that she earned a spontaneous round of applause.

“Children love to learn when it is fun. But not all are equally attentive. Children enjoy audio-visual stuff, particularly cartoons. Audio-visual aids can help everyone concentrate, absorb better, particularly slow learners. We can convey a lot through visuals instead of uttering so many words,” she said.

The workshop was a new experience for her. “What I have picked up has gaps. I need a lot more training. So I will keep using my new skills till I have grasped them fully. If, with some effort, I can take to my school what I have picked up here, it will be very helpful. It was a dream of mine to be able to use audio-visual aids for teaching.”

Roy feels she has been able to access something special because most teachers in government schools do not personally use computers.

“You need a creative spirit to use the audio-visual tool in education. The challenge is to make technology an aid for pedagogy that addresses the holistic development of the child,” remarked Mondal, who along with a group of teachers addressed the teachers over two days at the workshop.

Audio-visuals are a new aid to pedagogy to make learning joyful for the child, maybe in the same way as the old one of pure story-telling under a tree or in a verandah, that is, away from a standard classroom. The audio-visual tool has to be continuously adapted to the need to take forward a child’s learning activity and achievement. Mondal adds, “If technology can be used the right way then the teaching-learning experience will have embedded in it assessment tools.” A child’s response to technology makes up a learning assessment tool that tells you how the child is doing, so that you do not need to separately hold examinations!

The workshop began with a group of Class 4 schoolchildren rendering “We Shall Overcome” in English and Bengali, with an endearing North Bengal accent. Then they were shown an audio-visual depicting an unhappy family condemned to eat the same food every day and asked to draw a picture of an ideal family garden whose produce makes for a varied diet. This conveys a rationalisation of the practice adopted of creating kitchen gardens in schools which comes with the National Curriculum Framework.

Several films chosen by the faculty were loaded onto the laptops for the teachers to scour for clips to be used in their presentations. First came the story of Guppy, the fish, whose journey down the Ganga was used to depict the journey of the river. It was fun for Guppy initially but things changed, became troubled, as the Ganga travelled and became polluted. The story could be used to teach children how we pollute a river and threaten it, as also the life in it. The film could be used to devise activities for children so that they can imbibe the message and think up solutions. The final message could be: begin by thinking how you can clean up your village river. The film was a source of information for the children, presented in a digestible manner.

Another story on film was about one shoe in a pair. A boy travelling with his well-off family takes off one of his sports shoes at a railway station and then, in the hurry to get onto the train, leaves the shoe behind. A poor boy in torn chappals picks up the shoe and runs alongside the moving train to give the rich boy his shoe but fails. When the other boy sees this and looks at the poor boy on the platform, a fellow feeling develops and finally he throws the shoe still with him onto the platform so that the poor boy now has a nice pair of shoes. The message to be conveyed to children in the presentation to be woven around the film is: when you give unconditionally, it comes back to you undiminished.

For the teachers, the overall message is: make a lesson plan incorporating an audio-visual which passes on a message without appearing to teach. And where to get the audio-visual? Maybe a clip taken from a film or something on YouTube which is relevant to your class. A practical lesson is woven in on how to make a clip from a film and then all the steps to be gone through in creating an audio-visual which is part of a lesson plan. In creating the audio-visual, a key focus has to be kept in mind: Who is the audio-visual for? A good way to make children relate to a lesson is to focus on the immediate environment, habitat and local knowledge so that it does not go over the child’s head.

The idea is, content must enthuse the children. The lesson must engage them so that they can explore, explain and elaborate. By the time they have been through the process, the teacher will be able to evaluate what they have picked up.

One of the first simple skills taught was how to make a clipping out of a film or video shot with your smartphone, save it, edit it with open video editing software and then insert it into your audio-visual. Again, how to insert a bit of audio recording into the presentation by using your smartphone and headphone. All this was done to show how to prepare a PowerPoint presentation. The trick was to begin with a simple message and then insert text, audio and film clips. The whole process had to be structured by a storyline or storyboard which would be used as the main teaching aid.

The idea of do-it-yourself was highlighted when the teachers were asked early on the second day to form into small groups, go out of the resort and down the road into the surrounding tea garden and shoot with the smartphone whatever seemed appropriate for being put into an audio-visual presentation. This was to work on the idea outlined earlier that content should be located near at hand, preferably to spell out a concept like caring for the environment or everybody’s civic duty. This video and clips taken from films shown earlier and loaded onto the laptops went into making up the audio-visual, complete with headlines and text, which were used by every group to make a presentation that encompassed all the simple techniques picked over the two days.

Addressing the schoolteachers, Dibya Gopal Ghatak, deputy director, school education, said, “In the age of the internet when a child can access a thousand teachers, you, as a teacher, can network other teachers to meet the child’s needs. Your gap is you have not asked the child to think. Your quest has to be how children can learn themselves.” Pose issues to the children and use ICT as a tool so that they themselves come up with answers, he advised the teachers.