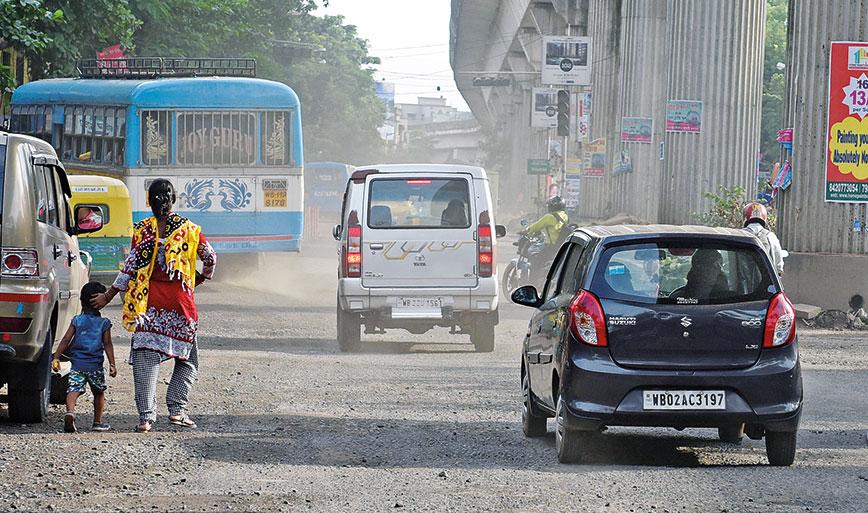 Last month Kolkata surpassed Delhi to become the metro city with the worst air quality in the country. This is despite the fact that Delhi is far ahead of Kolkata in terms of total number of vehicles on the road. What is more, the current ambient air quality around the Victoria Memorial, set amidst the green heart of the city, is worse than what it was last year in the most congested and polluted parts of the city.

Macro picture apart, here is a ground-level view. A couple of small hoardings have come up recently in the part of east Kolkata where I live. On them the local municipal councillor apologises for the work of asphalt topping of roads being temporarily stopped as the hot mix plants of the Kolkata Municipal Corporation (KMC) have been shut indefinitely on court orders. Without this the restored road surfaces cannot be metal topped and levelled out.

The hoardings tell a half-truth. True, the National Green Tribunal (NGT) in October stopped the operations of two hot mix plants within city limits run by the KMC. But this is after telling West Bengal’s Public Works Department (PWD) and the KMC for a year to phase out the outdated and polluting hot mix technology for road work and also to shift the plants outside city limits. The PWD is now ready with alternative means of resurfacing roads that come under its supervision. But the KMC is not yet ready and wants more time which an exasperated NGT has refused to give. Hot mix use has been stopped by Delhi since 2016 and a dozen other states now use alternative technology.

The NGT’s order is in response to a plea by the city’s celebrated environmental activist, Subhas Datta, requesting that plants which belch pollutants like particulate matter and oxides of sulphur and nitrogen be moved out of congested urban areas and the KMC adopt cleaner technologies. The KMC agrees that the over 50-year-old plants are polluting but says it needs more time to shift out and clean up its act. What happens in Kolkata is important as there are several other large cities in the state which are also victims of hot mix plant pollution.

The result of the plants’ closure is that today, right across the city, there are roads in appalling condition which cannot be repaired and people are having to live with this unbearable situation. In the case of my neighbourhood the current grief has actually been caused by a programme to improve things!

Early this year the KMC decided to lay underground sewers in even narrow lanes in this relatively new neighbourhood. So these were dug up, the pipes laid, the surface re-laid with broken bricks and road rollers evened out the surface. But the last act, hard-top resurfacing, is yet to happen. First, we thought the work would be finished before the rains came, then we hoped it would happen before the Pujas and now into winter the surfaces remain uneven like country roads used by bullock carts.

The situation at another end of the city has parallels. A grand elevated 6.85-km road has been built over a hugely busy Budge Budge Trunk Road on the southwest fringe of the city at a cost of Rs 355 crore. The local people have lived with enormous hardship during the construction period in the hope of better times. But this great new elevated road cannot be used and is blocked by the traffic authorities. Why this is so is a bit of a mystery at the time of writing.

One theory goes like this. The elevated road will be a boon to those who seek to go from one end of it to another. But those living in neighbourhoods in between along the elevated road still have to rely on the old road to get by. And they will not let the elevated road be used so long as the old road at the ground level, which has had to bear the brunt of the construction, is not repaired and restored. But this work is yet to begin. So traffic continues to crawl along the broken old road, adding to pollution.

Stung by the consequences of the NGT ban on the hot mix plants, the KMC is at last waking up. It is going to ask major construction firms (L&T did the Budge Budge elevated highway job) to arrange for their own hot mix and not rely on the KMC. However, confusion persists. The KMC is talking of getting a short reprieve from the NGT to run the existing plants while they are upgraded and shifted out of the city. How the two jobs can go on simultaneously is not clear. You can build new plants out of town, then shut down the old ones for upgrading and retrofitting. But building entire new plants costs money.

Close on the heels of the road repair impasse in Kolkata, the principal bench of the NGT in Delhi has imposed a fine of Rs 5 crore on the West Bengal government for failing to heed its directions to counter air pollution in the twin cities of Kolkata and Howrah. This order comes in response to an application also filed by Datta pointing to the state government not implementing a 2016 tribunal order asking it and the State Pollution Control Board (SPCB) to carry out the recommendations of an expert committee to improve air quality.

What is significant is that the principal bench of the Central Pollution Control Board (CPCB) in Delhi has something really harsh to say about the SPCB which “has remained blissfully silent despite the fact that it is the primary responsibility of the Board as a regulatory authority to ensure that the ambient air quality is maintained within the permissible limit”. If the regulator is so inadequate, then there is little wonder that things are going from bad to worse.