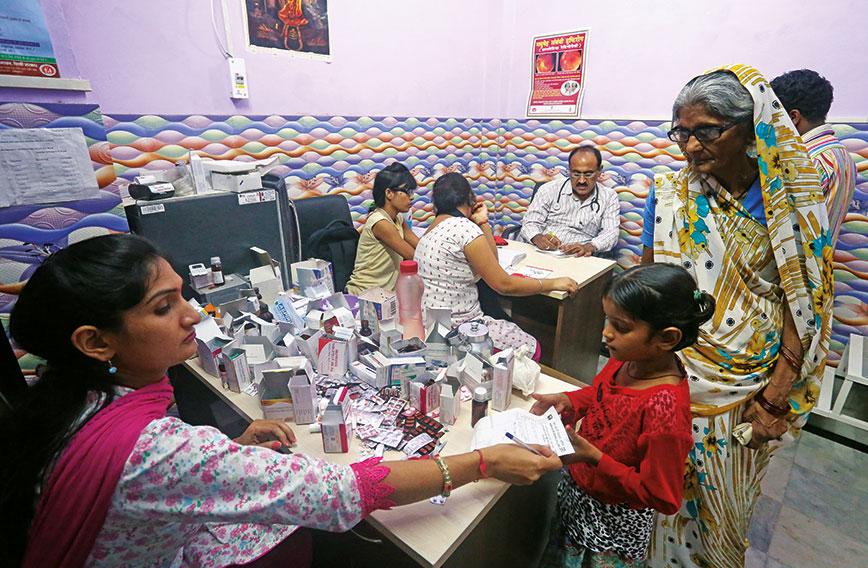 A mohalla clinic in Delhi which provides primary healthcare

THe Union Budget’s proposal for a National Health Protection Scheme has generated tremendous interest and excitement. It seems to offer an answer to a formidable problem plaguing India’s healthcare system. Two-thirds of what people spend on healthcare comes from their own pocket and treatment of a serious illness invariably leads to a severe financial setback. The poor often cannot afford proper care or, in trying to find a way of doing so, sometimes fall into destitution.

The scheme envisages 100 million not so well off families (notionally 500 million people) getting a Rs 5-lakh per year cover for secondary and tertiary care which the government claims will be the “world’s largest government funded healthcare programme.” But, along with the excitement, has come a flood of comments from experts arguing that the money would be far better spent on strengthening the public health service with focus on primary care and prevention. This scheme, according to the government’s own admission, addresses just the apex of the healthcare pyramid.

The logic of focusing on preventive and primary care is simple enough: help people live healthily so that they don’t fall ill and when they do, provide care at the lowest level (sub-centres and primary health centres), thus preventing as many as possible from having to go for costlier care.

Delivering this through the public health service reduces costs as the government itself is paying for and delivering what is effectively a single-payer insurance policy covering all, thus eliminating the costs incurred if care is delivered through private insurers. State delivered healthcare does not exclude anybody though the better off can opt for private care of their choosing.

But one reason why it can be practical to at least initially go in for a private insurance-and-hospitals delivered system is the current serious inadequacy of the public healthcare system and the time it will take for the government to build sufficient capacity. Also, there can be intrinsic disadvantages in having to live with a vastly extended government run system and theoretically it may be more efficient to outsource delivery and supervise it.

However, even the most ardent advocates of private insurer-hospital delivery will agree that it will be difficult to find private or non-government deliverers in the most farflung thinly populated parts of the country, where primary care facilities must exist. So, quite simply, the government has to do what no one else can or will. The situation obviously changes as you go up the specialisation ladder via district and super-speciality institutions.

A key reason for opting for the private delivery model is the inherent inefficiency of the government machinery in third world countries among whom India belongs. Hence, the overall rational at play since economic liberalisation began, is for the government to stop doing what can well be done by private players.

The argument against bringing in private players is equally powerful. Intrinsically, private for-profit deliverers will try to game the system by not opting for the least cost path, including undertaking unnecessary tests and procedures, thus maximising their revenue and profits, knowing full well
that the tab will be picked up under the overall insurance cover.

Indian experience with the Rashtriya Swasthya Bima Yojana (RSBY), under which people are covered upto Rs 30,000 and which the new scheme will subsume, bears this out. For example, unnecessary hysterectomy procedures have been reported and patients with minor ailments have been known to be admitted for pointless investigations simply to run through their insurance cover.

The problem with private delivery goes right up the ladder and in recent months, the media has been replete with stories of top corporate hospitals overcharging and mismanaging individual cases. There has been little effort to minimise cost to the patient. For example, patients are charged for consumables at MRP but the large discount that a hospital usually gets for bulk purchase is not passed on to patients. When a patient is covered by insurance, cost control is exercised by third party administrators (TPA) but even then, a patient often has to pay extra for expenses disallowed by TPAs.

If the private delivery route is widely adopted, as is likely, then it can only be allowed with rigorous regulation, something that does not exist today. The Indian system’s ability to enforce regulation which is efficient, is not rent seeking and does not act as a bureaucratic impediment is low, across sectors.

If both state and private hospitals are allowed to bid under a system of public procurement of healthcare delivery and successful bidders are paid based on number of patients treated and their polled satisfaction levels, then there is scope for some healthy competition. But to be able to compete effectively, government hospitals need to have the necessary infrastructure and staffing, and their supervisors have to allow their managements the space to function.

One way of finding out what works is to look at healthcare systems across the world, particularly those that work the best. A study by The Commonwealth Fund (Mirror, Mirror 2017) of the healthcare system in 11 of the highest income countries finds the UK, Australia and the Netherlands topping the list (in that order). At the bottom come Canada, France and the US (in that order). The US is a real outlier. Its comparative poor performance is despite its spending the highest share of its GDP in the group, at 16.6 percent, on healthcare. Australia, which comes second, spends the least, at 9 percent.

Importantly, the three top rankers and the tailenders have different systems. The toppers offer universal coverage but in different ways. The National Health Service of the UK is funded by the government (not through insurance premiums) which runs and operates it. Most hospitals are publicly owned and specialists are often government employees, but general practioners often run private practices. The Australian healthcare system, Medicare, funded by the government, offers universal coverage. But many hospitals are privately owned and around half of Australians buy private health insurance. Australian Medicare is like the US Medicare.

In the Netherlands, private insurers pay healthcare costs. They, in turn, are funded by community rated premiums and payroll tax levied on employers. These are pooled and distributed among insurers depending on the risk profile of their customers. This managed competition system is somewhat akin to the insurance marketplace created by Obamacare (Affordable Care Act of the US). The US, despite the recent improvement through the new system which makes it obligatory to take out health insurance, does not offer universal coverage.

While there will be debate about how to run healthcare at the top of the pyramid, what does the budget offer for primary care which perforce has to be mostly government run? The budget allocates Rs 1,200 crore for 1.5 lakh health and wellness centres for comprehensive care which covers not just maternal and child health and free drugs and diagnostics, but also treatment of non-communicable diseases. (The latter typically includes diabetes, cancer and cardiac ailments.) To deliver such wide coverage, the allocation is pathetic and looks like tokenism.

The new health protection scheme will be run by the states. They will have to pick up 40 percent of the likely annual tab of Rs 10,000 crore and can choose the mode of delivery — a private insurance system or a trust-based system under which a trust set up by a state government supervises and administers the spending. Since these are early days it may be a good idea for different states to try out different models and then winners will emerge.

But there can be no dispute over what is the topmost priority in delivering healthcare. To make a difference, it is the bottom of the pyramid that has to be addressed foremost. The chairman of UK’s NHS, Malcolm Grant, with the weight of history behind him (NHS is 70), put it pithily in an interview with the Indian Express, “It would be wise to ensure that a significant amount of investment goes into primary care and not into more shiny hospitals.”