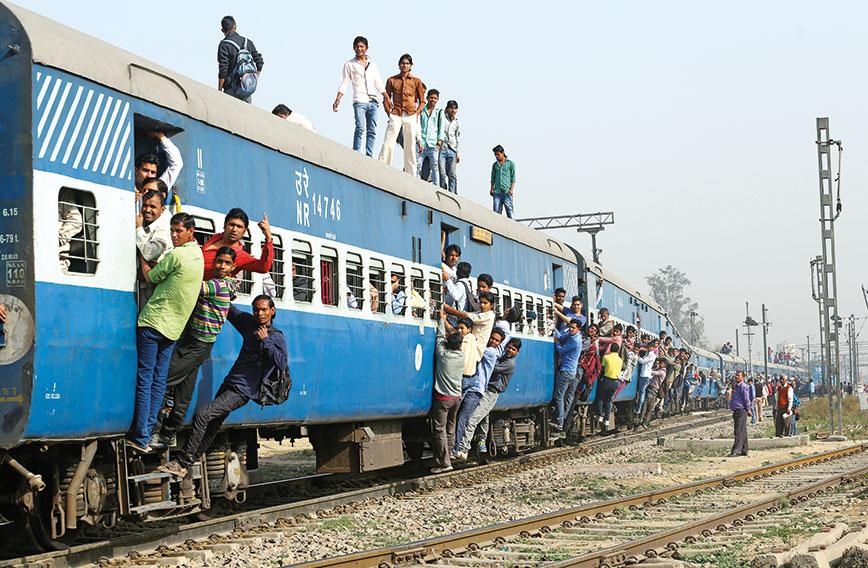 INDIAN Railways has started on a hugely ambitious journey, outlined in the draft national plan circulated among different ministries. As there is a month’s window from the time of writing for making comments, the final shape of the plan, particularly taking into account the views of the Union finance ministry, is not yet defined but the broad contours are clear.

In keeping with its role as national carrier, the Railways has gone beyond formulating just a business plan but also set out an overriding wider social goal — becoming carbon neutral (zero net emissions) by as early as 2030. Towards this end, it seeks to rely extensively on setting up solar power projects on railway land.

The plan looks ahead three full decades to 2050, setting out the final as well as interim targets too. The first milestone will be 2024 by when the Railways expects to complete certain critical projects. One of them is to achieve 100 percent electrification and another is to eliminate all level crossings (a perennial source of accidents) along the golden quadrilateral and diagonal routes.

As with all business plans, a set of goals and what needs doing to achieve them have been spelt out. A key task will be to estimate the capital investment needed, not just in its entirety but at intermediate stages too, in order to get to the different milestones.

The next question the plan addresses is to identify from where this capital will come. The plan breaks new ground by indicating it will rely not just on its own surplus generated but also the public-private partnership (PPP) route, investment partners in both the public and private sectors, state governments and original equipment suppliers.

Critically, the Railways will cease to rely on budgetary support for investment beyond 2030. It will then generate surpluses from its operations even after meeting debt service obligations plus secure funds from the extra budgetary sources outlined above.

How big a change this will represent is indicated by the revised estimates for 2019-20. In the last financial year the Railways received a gross budgetary support of `68,100 crore which represented 43.6 percent of total capital expenditure. Compared to this, internal resources represented a paltry 3.2 percent. Going from 3.2 percent to around 50 percent in four years (assuming that the share of extra budgetary resources remains the same), out of which one year is as good as gone because of the coronavirus fallout, raises the question as to how seriously the national plan should be taken.

The projection has been made keeping in mind the resolve that not having to rely on government funding will not mean sacrificing growth. Instead, the Railways will seek to not just increase its share of the total freight offered in the country but also its footprint on the entire economy. To be ready with adequate capacity in time, the plan has a projection of anticipated logistical demand in the country for every year until 2030 and on a decade-wise basis thereafter.

By projecting demand and capacity available along the way, the plan has identified bottlenecks likely to emerge and has a sense of the technology which will be required to get round these bottlenecks.

To get a feel of what kind of journey this plan represents, it is useful to juxtapose some of its numbers against ‘Vision 2020’ the Railways formulated over a decade ago in 2009. The Vision sought to reverse the steady decline in the Railways’ share of the national transport business — from 89 percent in 1950-51 to 30 percent in 2007-08.

But this did not happen. Today the Railways’ share has come down further to 27 percent. The national plan seeks to take this up to 45 percent by 2030. Reversing a just under one percent fall per year on average to a close to 2 percent rise per year is, to say the least, hugely ambitious.

Not receiving capital support after 2024 and vastly upping internal resource generation means the Railways taking a quantum jump in generating a surplus. The indicator for this is the operating ratio — earning minus operating expenses. The lower this figure, the better.

Over the past few years, the operating ratio has been getting worse, and is now nudging 100 percent. From 90.5 percent in 2015-16, it has risen to 97.5 percent in 2019-20. Even this is misleading. The CAG has said that the Railways has engaged in “window dressing” by including advance freight from NTPC for carrying coal and making lower appropriation to depreciation reserve fund and pension fund to make the ratio look better than it actually is. In fact, in reality the operating ratio has gone beyond 100 percent, that is, the Railways is spending more on operations than it is earning.

Mindful of this, the outgoing chairman of the Railways told The Economic Times that “by 2024 we should see a significant improvement in our operating ratio…. We are trying to improve our operating expenses by introducing technology and upgrading our infrastructure.” Spelling this out, the newspaper said, “The Indian Railways will see a significant improvement in its operating ratio with reduction in its cost of operations and adaptation of modern technology, all envisaged in the National Railway Plan.”

The single biggest expenditure for the Railways, in fact, what is crippling it, is staff expenses. And this gets worse with the acceptance of every new Pay Commission’s report. Just when the Railways manage to pay off the arrears and shoulder the burden of one report, the next one is lurking round the corner.

In 2018-19, the wage bill, which includes pensions, constituted 72 percent of total expenditure. In the current year’s budget (2020-21), this comes down to 66 percent. Mindful of this, the Vision document set the goal of one percent reduction in sanctioned staff strength per annum, assuming a natural attrition of 3 percent. That is, fresh recruitment in a year should not exceed 2 percent of the staff strength of the previous year.

To vastly improve margins, so that the Railways can do without budgetary support from 2024, it should bring down the headcount as rapidly as possible and certainly not up it. But if that is to be achieved, why this recruitment drive? Does it not take away from the credibility of the national plan and its projections?

Those who feel the Railways are justified in seeking major support from the government argue that it is a public good. It serves a public purpose by making it possible for poor Indians to take up any kind of long-distance travel not just for family reasons but also to go on pilgrimage or Bharat Darshan. Such travel must remain affordable so that the idea of ‘one India’ is taken forward, something which the present dispensation will certainly want.

Plus, the primary focus should be to make unreserved second class travel reasonably comfortable for poor people who are satisfied with very little. Instead, there is so much hype over privatization of individual trains and introducing bullet trains.

It is not as if worthy investment projects are not being pursued, like aggressively enhancing solar power capacity and making the freight corridors a reality. The latter will hugely enhance capacity and allow vastly more freight to be carried and speed up all trains, passenger and goods. But some fine tuning is necessary. The system should focus less on the middle and upper middle class passenger and worry more about enhancing the quality and capacity of second class travel.

There are some of us who love Indian Railways, not just for the romance of the steam engines and the beauty of the toy trains which give a unique view of the hills, but also because they are a great enabler of the idea of India. The Railways deserves the best, both in terms of planning skills and material help.

Subir Roy is a senior journalist based in Kolkata