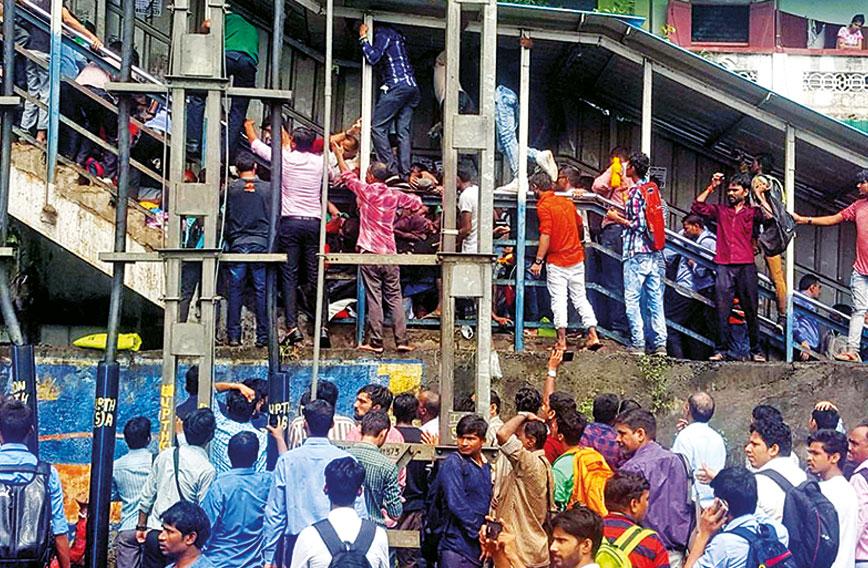 The stampede in Mumbai which killed 22 people

How to fix railways

SHortly after the Utkal Express derailment took place owing to established operational procedures not being followed, killing 23 people, a former senior railway official who was closely connected with finance, speaking to me off the record, blurted out, “They (the railwaymen) seem to be interested only in making money.”

I put it down to his getting a bit emotionally carried away on seeing the beloved organisation he had served for a lifetime come to such a sorry pass. But soon thereafter a similar sentiment was expressed by none other than the current railway minister, Piyush Goyal. Reviewing the estimates for two elevated rail corridor projects in Mumbai, he is supposed to have interjected, “how can the cost of every km of elevated track be more than what it would be for a bullet train?” and added, “I feel suffocated with the level of corruption in the room.”

Corruption is not the only issue. When allegations of delay and negligence were levelled against Suresh Prabhu, railway minister until very recently, over a new foot overbridge not being readied in time to relieve the rush (the Elphinstone stampede, killing 22 people, would not have occurred had the new bridge been there), a spokesman for Prabhu gave the entire sequence of events for the new bridge.

In late 2015 an MP wrote to Prabhu asking for a new foot overbridge to be built.  He was able to reply only by February 2016, that is, over two months later, as the expenditure for a project of its size had to be sanctioned by Parliament. In his reply Prabhu said that the project was “under active consideration” though these were “challenging times” for the railways because of the “global slowdown”. The sanction came immediately thereafter. When the accident occurred, the project had been sanctioned and the tenders were due to be opened in just over a month’s time, early November.

Prabhu’s contribution, the spokesman said, was that compared to it taking three years for the tenders to be opened after a project was sanctioned, in this case it was set to be done in a bit under two years. This was because of the initiative Prabhu had taken to shift online the tendering process for works contracts so as to have greater transparency and speed.

To complete the picture, so to speak, this is what the leader of one of the railwaymen’s unions has to say in connection with the recent accidents. Repair and maintenance work was not being carried out on time, causing the railways to operate under unsafe conditions. The necessary equipment, particularly imported machine parts, and trained staff have to be available on time. Outsourcing of maintenance work, eventually carried out by staff not properly trained, was also an issue. However, unfortunately, with rising traffic and increase in number of trains, blocks for maintenance and repair work were not available on time.

What is the solution he proposed? Withdraw the 30,000-odd staff, some of them trackmen, who were engaged in doing household work at senior officials’ residences, and deploy them in regular operations. In fact, the new chairman of the railway board has already issued orders for withdrawing gangmen “unofficially” deputed at officials’ residence for household work. The staff shortage, which led to lack of maintenance, was also due to a pause in recruitment in the last two years.

While the union leader dwelt on these issues, his main argument was that you cannot blame railway employees for the recent accidents and you cannot sack them without conducting an inquiry, as has been done for 13 employees after the Khatauli accident in August.

I have deliberately dwelt at some length on real words from real people who know the scene to paint a picture of the current state of affairs in the railways. It will be clear that the national carrier is riven with corruption and hamstrung by outdated procedure. Hence, they have been cutting corners and ignoring their own safety rules, at enormous cost of letting fatal accidents happen. Overall, there is a great lack of ownership on the part of those who run the organisation.

These trends do not emerge in a day but with hindsight it is clear that merging the railway budget with the overall Union budget has contributed to the lack of commitment. The railways were earlier set apart from other public sector organisations with considerable parliamentary time and space (the rail budget documents) being given to it. Now, it is just another somewhat faceless departmental operation.

While steps have already been taken to make funds available for overdue maintenance work, most prominently replacement of old tracks (these giving up has led to a string of derailments), and this is likely to be speeded up, a lot more needs to be done.

The railways need to be given a high profile and a distinct identity and the best way to do this is to corporatise it. (This has nothing to do with privatisation as the government can continue to hold even 100 per cent of the shares.) Along with this it needs a dynamic leader who can lead from the front like many a charismatic CEO in the corporate sector. Additionally, corporatisation will lead to commercial accounting systems under company law being followed which will enable the organisation’s financial performance to be properly benchmarked and also make for greater transparency.

The task before a new CEO will cause him to look both back and forward. Well established and laid down operational procedures will have to be meticulously followed. As the former official quoted above said, “If they just go through the innumerable reports of the Commission of Railway Safety on past accidents and their recommendations, that will give  a massive to-do list to work on.”

Plus, the railways must move faster in adopting new technology available round the world — not just gimmicky focus on bullet trains but stuff that makes operations safer. And critically, there has to be a plan to go digital and adopt information technology as extensively as possible.

If all this is done, along with a corporate focus on marketing and being in new and better paying business to regain market share, the country will have a railways that is intrinsically profitable (reimbursing transparently calculated losses incurred in discharging social service obligations is another matter) and that it can be proud of.