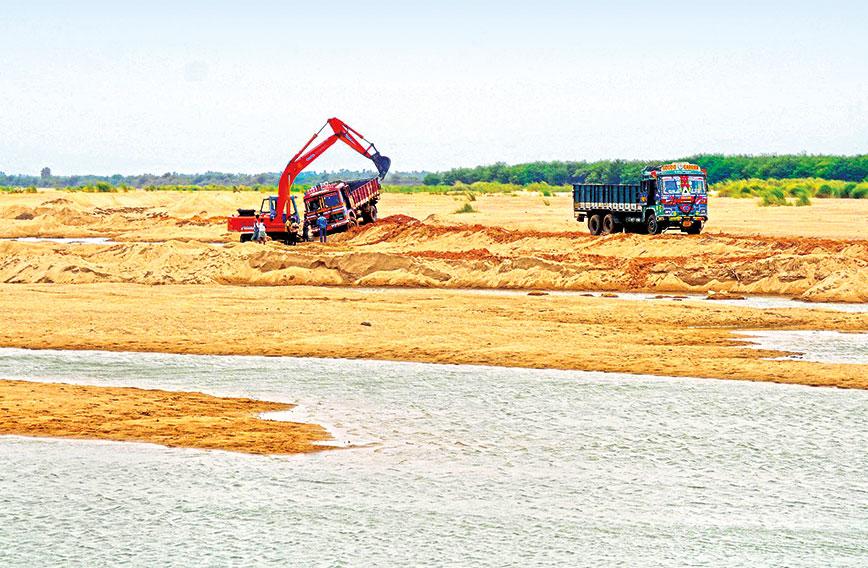 Sand mining is still a menace

The mining of sand from riverbeds and beaches is now a globally recognised emergency.  In February 2017, the Guardian carried a detailed story on how industrial sand mining is “causing wildlife to die, local trade to wither and bridges to collapse”. Urbanisation and the construction industry have played a huge role in upping the demand for sand and gravel, the article said. In coastal areas large truckloads of sand are regularly transported to extract atomic minerals, silica and other precious metals like zircon and gold.

India is in the middle of this conundrum. The Guardian’s article reports that the amount of sand used for construction annually has tripled since 2000. The media is replete with stories of ecological damage, ruinous social impact and deep-rooted corruption associated with the sand mafia. Challenging the impact or the illegalities in extracting sand has been highly risky for both government officials and conscious citizens.

For the longest time riverbed and beach sand mining was an unregulated sector in the country. This extraction took place in small plots that did not require environmental approvals.  Talk to local villagers and they often recall that such mining was manual and carried out during the night with little scrutiny. The attempt to bring this sector under environmental scrutiny started with the Supreme Court’s judgment in 2012, which was then picked up and taken forward by the National Green Tribunal (NGT), a process that resulted in a crucial ruling in January 2014.

It was only after this that the Union Ministry of Environment was pushed into putting in place a detailed mechanism to assess, appraise and take decisions related to minor minerals. Since 2015, this column in Civil Society has attempted to analyse both the issue of riverbed and sand mining and the manner in which it is being regulated. In mid-2016, this column carried a detailed explanation on how riverbed and sand mining up to five hectares, listed as ‘B2’ category activities under the Environment Impact Assessment (EIA) notification, was sought to be regulated post the NGT directions.

The environment ministry’s January 2016 notification put in place a new structure that required each district in the country to have a District Level Environment Impact Assessment Authority (DEIAA). All individual leases up to five hectares need to seek permission from the DEIAA based on an assessment by a District Level Environment Appraisal Committee (DEAC). This mechanism is uniform as the assessments are done both at state and central level. Only in this case there are to be no EIAs or a public hearing, as these are B2 projects.

What is available is information on the number of applications and approvals for these 18 states. It is unclear whether these are all B2 sand mining projects but it does give us a sense of the extent of operations that have come up before the district-level authorities. As per the available information, the number of projects submitted for environment clearance before DEIAAs is 13,017 across the 18 states. Out of these, 4,080 are under examination and 321 were returned due to shortcomings. The DEIAAs have reportedly recommended approval for 3,512 projects and granted approval to 2,691. Only 100 have been rejected. The rest are at various stages of approval, that is, they are being appraised by the district-level expert committees or recommended by them but pending final clearance from the DEIAA.

The above data is for “all proposals received on or after 28th June 2016”. Further digging through this data reveals that the largest number of approvals for minor mineral extraction is in Chhattisgarh, that is, 1,500 applications. Maharashtra follows with 654, Kerala with 238, Uttar Pradesh with 152, Tamil Nadu with 62, Karnataka with 35 and Madhya Pradesh with 32. The other states have either no proposals or a negligible number received for appraisal.

This can only mean three things. First, there is no mining of minor minerals under five hectares in these states. Second, no applications have been received by the DEIAAs or the DEIAAs are non-functional, or, third, the state governments have not provided the information to the Union environment ministry, which will publicly disclose the status of how minor minerals are being regulated at district level.

A report on 26 February in the Times of India said that the NGT has “appointed court commissioners to verify allegations made in a plea regarding illegal sand mining in the Jodhpur district of Rajasthan.” The district magistrate and police are to provide support to these commissioners. The environment ministry’s district portal lists the number of DEIAA-level applications for Rajasthan as zero. Another report on 6 March in the Hindustan Times highlighted how Punjab Chief Minister Amarinder Singh has finally ordered a probe into rampant illegal sand mining in the state.  On the district portal, 16 applications have been received by DEIAAs in Punjab and six approved.

We have a long way to go before the massive scale of sand and riverbed mining can be controlled. Commercial demand is on an upward spiral. Regulation has been ineffective and several judicial orders are not being implemented. There is no guarantee that in such messy sand wars, an institution like the DEIAA will be able to assert itself. But then, are we as citizens attempting to engage with this dire problem?